Oded Ravivi, head of Efrat's regional council, talks about the personal invitation he extended to the US president to visit the Gush Etzion settlement block in an interview with Mazal Mualem. 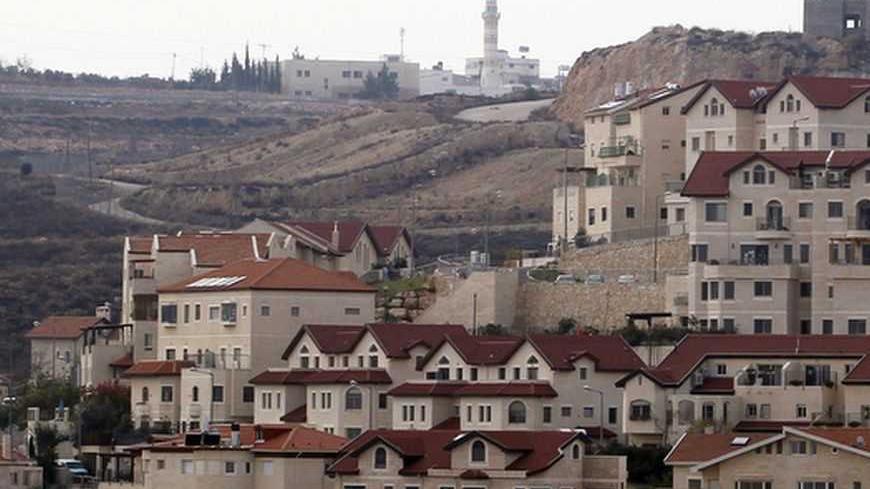 A mosque in the Palestinian West Bank village of Abdullah Ibrahim (rear) is seen behind houses in West Bank Jewish settlement of Efrat, near Bethlehem, Dec. 22, 2011. - REUTERS/Baz Ratner

Oded Ravivi, Head of the Efrat Regional Council in the Gush Etzion settlement block, has become accustomed to the surprise in the faces of people who first meet him. While people expect to meet a combative, unyielding settler, instead they encounter a youngish, 44-year-old lawyer and lieutenant colonel (Res.) who was born in Ramat Gan, near Tel Aviv.

It started for practical reasons, not purely ideological ones. Ravivi found his way to Efrat after his marriage, when he was searching for a house and found Jerusalem too expensive. He built his house ten minutes from the capital city, between Bethlehem and Hebron, fathered six children there and became involved in local politics. Five years ago, he was elected to the position of Head of the Efrat Regional Council. Ravivi brought to his job ideological pragmatism and a world view in favor of coexistence with the Palestinians.

In anticipation of Obama’s visit to Israel next month, Ravivi sent the American president a personal letter with an invitation to visit Efrat first, and only afterward make conclusions about the Israeli-Palestinian conflict and its solution.

Ravivi clearly knows that the chances for such a presidential visit are almost nil, when Obama will be in Israel for only 48 hours. Nevertheless, he responded to my request to imagine what would happen if such a visit were to actually take place.

Al-Monitor:  Obama lands in Gush Etzion, the presidential cavalcade enters the gates of Efrat and you have half an hour with the leader of the free world. What do you say to him?

Ravivi:  I’ll start with a story. Two years ago, [former US President] Jimmy Carter visited the region and said two things that amazed me. He asked us if we had any idea when he first met an Arab face to face. After an embarrassed silence, he told us that it happened in Camp David, and the first Arab he ever met in person was Anwar Sadat. This statement fascinated me. Therefore, I would take Obama to see the reality on the ground, the very small distance separating us and the Palestinians. That would bring him to truly understand the reality of our lives.

I would tell him how, when I first assumed my position as head of the Efrat Council, the Home Front Command showed me the emergency water tanks. I asked where were the tanks of the Palestinian villages, and understood that they don’t have any. In my eyes, that made no sense. I convinced the Home Front Command to allocate emergency water to those villages as well. The reason is simple: it is impossible to sever these two entities, and we must find a different, unique formula for living side by side. Therefore I would recommend to Obama to see our lives from up close, and only then formulate plans and insights. I would also suggest to him to meet the village head — the mukhtar — and understand the unique needs of both sides.

Al-Monitor:  Are you concerned that Obama’s visit will have repercussions on your lives?

Ravivi:  I am a Likud member and I supported [Prime Minister Benjamin] Netanyahu for ideological reasons. During his tenure, construction in Efrat was resumed after a 12-year hiatus; for that, we must thank him. It was under Netanyahu that we emerged from the building-freeze crisis. We have a hundred new young couples every year in Efrat, couples that didn’t have anywhere to live. Young couples have not moved to Efrat in over a decade, and the same is true for all the large settlements: In Ariel, they [were forced to] close schools and kindergartens because the population is aging; no young people come because there is no place to live. Take Efrat, for example: A decade ago, we had 7,800 residents; today 9,000 all together. With Netanyahu, 998 [housing units] were approved only in the course of the last year. That is an addition of 60%, and part of the construction has already begun.

Al-Monitor:  So why did most of Efrat’s residents prefer [HaBayit HaYehudi leader Naftali] Bennett?

Ravivi:  True, only 23% of Efrat’s residents voted for the Likud, and that is a shame. People thought that Netanyahu would be prime minister in any case, so they voted for Bennett. I supported the Likud publicly because I thought, out of a national perspective, that it’s best to have two, three large parties, and I was right. The prime minister faces an impossible situation today. It is hard to form a coalition, and at the end of the day it will be a much more complex coalition that what we have known until now. Netanyahu’s challenge will be to maintain a coalition and parties like Yesh Atid, which has [Mayor] Yael German from Meretz on one hand, and settler [Rabbi] Shai Piron on the other. That’s why I am concerned that we’ll be facing new elections in the near future. The alliance between [Yesh Atid leader] Yair Lapid and Naftali Bennett around the burden-equality issue [in military service] can disintegrate in a minute due to [Israel-Palestinian] diplomatic negotiations.

Al-Monitor:  What does the Bennett-Lapid alliance really mean, when Bennett is supposed to represent the settlers’ interests?

Ravivi:  Most of his voters live on the other side of the Green Line, and I can’t know his level of commitment. I expect him to take responsibility and say where he is willing to compromise, to join the government and, ultimately, to help. But if it turns out that Naftali presented himself as a right-winger but in fact he promotes a left-wing policy, that would be fraud. And next time around, people will settle accounts with him.

Al-Monitor:  Netanyahu declared his support for two states for two nations. Is that OK as far as you are concerned?

Ravivi:  If we really want peace, we need to be realistic. But I really don’t know if he supports the two-state solution, and in general I am not sure that we examined how realistic this declaration is. It’s uncertain to what extent a Palestinian state like this could maintain itself. I am in favor of a compromise because I am realistic.

Al-Monitor:  You would support a territorial compromise?

Ravivi:  It is incumbent on us to be pragmatic; thanks to that we manage to survive. Even today’s Obama is a different president than he was at the beginning of his [first] term of office — then he forced us into the [construction] freeze that did not lead to where he wanted. If a Palestinian leader will emerge who will receive guarantees and can be relied upon, and say that he relinquishes Jerusalem in exchange for Gush Etzion, I have no doubt that the State of Israel would concede Gush Etzion. But I don’t really know if there will be a leader like that on the other side.

Al-Monitor:  As someone who has his feet on the ground, how will the renewal of the diplomatic process be accepted on the Palestinian side?

Ravivi:  On the local level of the villages surrounding us, I see that the population there isn’t concerning itself with it. What bothers the people there is making a living and going to sleep peacefully. They are less concerned about their national identity and if they could have their way, they actually would want to be connected to the Israeli authorities. Of course they would never say these things out loud, they are scared to death of the higher-ups. For example, I can have close contacts with them and decide things together with them, but the moment a camera appears they relate to me like a stranger. I attempted to initiate a project: that Arab-language teachers from the village school near us, would come to our schools and teach Arabic. They wanted it, but there was fear, and it never happened. There is terror and fear of the Hamas, in levels we never witnessed in the past.

Al-Monitor:  What advice do you have for policy-makers on both sides?

Ravivi:  To get together and hold those discussions that are not necessarily about borders, but regarding the more practical aspects of life, the basics. We have to begin there, and build up the trust that has been lost. Politicians tend to talk in slogans, so now they are talking about "interim agreements." I really don’t know what an interim agreement is. I just know to tell you that Efrat has no fence because there’s no money left, and we are an excellent example of normal life. Everything I described is not written in any agreement or understanding, but it happens on the grassroots level because it serves the interests of both sides. I truly believe that the more external players there are who disseminate claims from the past and raise the right of return and the Jerusalem issue over and over — we will never reach an agreement.