Geoffrey Aronson writes that, in the absence of a strategy for dealing with the Middle East, seeking advice from leaders in the region can be compared to listening to the inmates in an insane asylum, where useful advice is in short supply. 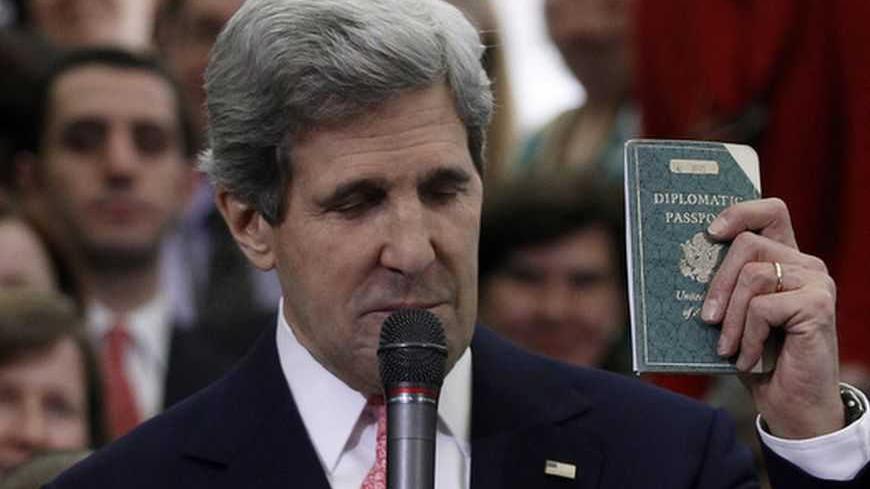 John Kerry, the new US Secretary of State, holds the diplomatic passport he was issued at eleven years old, while greeting employees of the State Department in Washington Feb. 4, 2013. - REUTERS/Gary Cameron

Events in the Middle East, so far from the typical American experience, can exert a direct and often malicious influence on American life. In the last two decades, hundreds of thousands of Americans have served in harm’s way throughout the Middle East as soldiers in the war on terror.

President Barack Obama has noted the “vital national-security interest of the United States to reduce these conflicts, because whether we like it or not, we remain a dominant military superpower, and when conflicts break out, one way or another we get pulled into them. And that ends up costing us significantly in terms of both blood and treasure.”

The administration recognizes the connection, in “blood and treasure,” between the costly American interventions in Afghanistan, Pakistan, Yemen and elsewhere and the festering conflict between Israel and Palestine. Gen. James Mattis, commander of US Central Command (CENTCOM), acknowledged the clear and direct connection between the unresolved contest over Palestine and the threat posed to US interests in the region. In congressional testimony in March 2011, Mattis stated: ”[L]ack of progress toward a comprehensive Middle East peace affects U.S. and CENTCOM security interests in the region. I believe the only reliable path to lasting peace in this region is a viable two-state solution between Israel and Palestine. This issue is one of many that [are] exploited by our adversaries in the region, and it is used as a recruiting tool for extremist groups.

“The lack of progress also creates friction with regional partners and creates political challenges for advancing our interests by marginalizing moderate voices in the region. By contrast, substantive progress on the peace process would improve CENTCOM’s opportunity to work with our regional partners and to support multilateral security efforts."

One year earlier, Mattis’ predecessor, Gen. David Petraeus, made a similar point, saying, “The enduring hostilities between Israel and some of its neighbors present distinct challenges to our ability to advance our interests. [...] The conflict foments anti-American sentiment, due to a perception of US favoritism for Israel. Arab anger over the Palestinian question limits the strength and depth of US partnerships with governments and peoples, and weakens the legitimacy of moderate regimes in the Arab world. Meanwhile, al-Qaeda and other militant groups exploit that anger to mobilize support [...]”

As a recent study-group report of the Stimson Center (of which I am a member, in the interest of full disclosure) concludes, “The failure to secure Israel’s future on terms other than via its continuous unilateral use of force and unending occupation, and the associated failure to establish a Palestinian state at peace with Israel, represents a significant strategic liability for the United States.”

The United States, for the first time in memory, will soon have combat veterans serving as secretaries of state and defense. They can identify first hand with the difficulties of today’s generation of fighting men and women battling little-understood, shadowy enemies in far-flung hamlets and valleys halfway across the globe. Chuck Hagel, Obama’s nominee for secretary of defense, has roused the hackles of colleagues in the Senate in part because of his reluctance to use force in Iraq, Afghanistan and Syria.

Kerry, for his part, has spoken eloquently of the connection between Palestine and Peshawar.

"So much of what we aspire to achieve and what we need to do globally — what we need to do in the Maghreb and South Asia, South Central Asia, throughout the Gulf — all of this is tied to what can or doesn't happen with respect to Israel-Palestine," Kerry said at his confirmation hearing. "And in some places it's used as an excuse. In other places it's a genuine, deeply felt challenge."

Like his recent predecessors, Democrat and Republican alike, Kerry thinks that he knows what the happy ending in Palestine looks like — the creation of a Palestinian state at peace with Israel — but he has yet to figure out who to take on the journey or how to convince them to join him in order to prevent the “disastrous” consequences of continuing failure.

Kerry’s inaugural foreign trip as secretary of state will be to the Middle East, where he will lay the groundwork for a presidential visit to Israel, the West Bank and Jordan in mid-March.

The administration is at pains to lower expectations for these trips.

“The president is not prepared, at this point in time, to do more than to listen to the parties, which is why he has announced he’s going to go to Israel,” explained Kerry on Feb. 13. “It affords him an opportunity to listen. And I think we start out by listening, and get a sense of what the current state of possibilities are and then begin to make some choices.

“It would be a huge mistake, almost an arrogant step, to suddenly be announcing this and that without listening first, so that’s what I intend to do. That’s what the president intends to do.”

Kerry has hardly had enough time to buy pens for his office, let along craft a new initiative to solve the Arab-Israeli conflict. Despite a clear sense of the status quo's costs, the administration has not determined how badly it wants an agreement and exactly what it is prepared to do to make that happen — not yet, anyway. Its energies are instead focused on preparing a visit to listen to the inmates in the asylum, where useful advice is sure to be in short supply.