While the Egypt crisis deepens, the Obama administration continues to give priority to an Israel-Palestinian agreement. 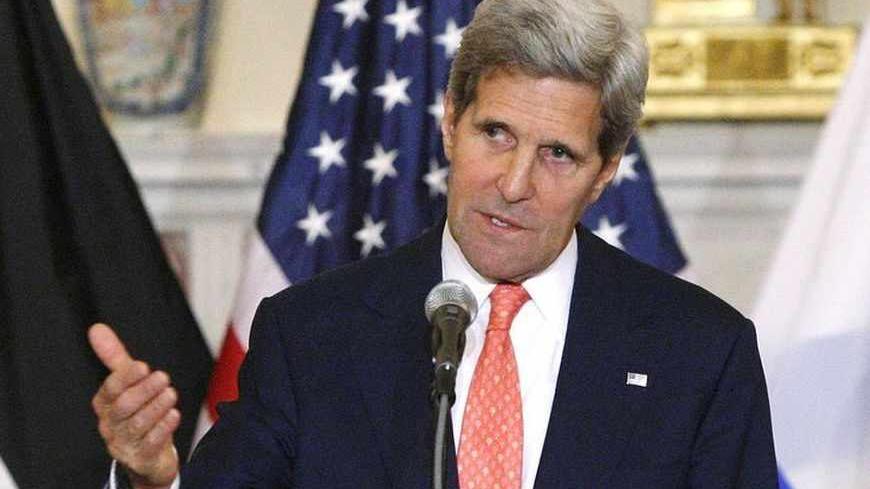 US Secretary of State John Kerry announces further peace talks at a news conference at the State Department in Washington, July 30, 2013. - REUTERS/Jonathan Ernst

At an Aug. 8 meeting with a select group of leaders from American Jewish organizations, US Secretary of State John Kerry sought to enlist support for the “talks about talks” between Israelis and Palestinians that opened in Israel on Aug. 14.

The Jerusalem Post reported that Kerry “repeatedly told the group that the Muslim Brotherhood was not returning to power in Egypt,” an observation particularly relevant in view of the bloody battles pitting military and police units against Ikhwan supporters that commenced across Egypt the day talks got under way in Jerusalem. According to the Post, “He also mentioned that Hezbollah and Iran were distracted with the Syrian conflict.”

Kerry's assessment suggests that Washington sees an opportunity for a historic rapprochement between Israel and Palestine in this moment of expanding chaos and instability engulfing the area from Baghdad to Tunis. Even more than that, Kerry sees Israeli-Arab peace as a weapon in the other, sometimes-related metastasizing divide that Americans now believe defines the region — the struggle between Iran, its allies in Syria and Lebanon against everyone else in the region.

Kerry stressed that ending the conflict is a “strategic imperative” for both Israel and the yet-to-be established state of Palestine. He also made the argument that Israel faces the threat of “diplomatic isolation and a demographic clock” if its occupation, now in its 47th year, continues. He has presumably warned Palestine Liberation Organization Chairman Mahmoud Abbas of other perils that await the Palestinians if the parties fail to get to “yes.”

It is all well and good that Kerry believes that for Palestinians and Israelis alike, a peace agreement that requires each side to make “hard choices” is vital. So much the better that he feels that both Prime Minister Benjamin Netanyahu and Abbas have concluded that peace is “a strategic imperative.”

These achievements, however laudatory, may raise expectations of a deal, but in and of themselves, they promise little more than a continued stalemate. The most important question — the one that will decide whether a deal that “ends the conflict” is ever on the table — is whether Kerry and the Barack Obama administration as a whole believe that such an agreement is a strategic imperative for the United States as well.

The signs today suggest that the administration has yet to assimilate this critical objective into its conduct. True, the fact that the sides have agreed to talk about talks is a victory for Kerry, however nominal. Washington has to win battles such as this if it expects to win the war itself. This is an important principle to establish if there is to be progress beyond the inevitable obstacles and provocations that each party will raise and the overwhelming sense of deja vu attending the resumption of diplomacy. But it merely hints that Washington stands prepared to insist that the parties agree on a deal and that President Obama is willing to draw a picture of its contours if the parties prove unable, as they are certain to do.

It has indeed been refreshing to be spared the defeatist sentiment that Washington cannot want an agreement, or peace — take your pick — more than the parties themselves. The phrase has been trotted out in the past by US officials to rationalize Washington's failure and to minimize the US interest in and commitment to a final status agreement.

The Israeli and Palestinian leaderships understand that the American view of things may be decisive, and that is why it is a fair guess that most of the countless hours that Kerry has spent in recent months with Netanyahu and Abbas have focused on the efforts of each of them to prod Washington into its respective and often-antagonistic corner on such issues as borders, settlements, security, refugees, land swaps. Each sees its negotiations with Washington as more important than the talks between themselves that have just commenced.

There is more than enough evidence to suggest a vital US interest in an agreement. Kerry views it as a weapon in the cold war with Iran, but there are other considerations as well. Speaking in July in at the Aspen Institute’s annual Security Forum in Colorado, General James Mattis, recently retired commander of US Central Command, warned, “We've got to work on this [an agreement] with a sense of urgency ... I paid a military security price every day as a commander of CENTCOM because the Americans were seen as biased in support of Israel and ... all the moderate Arabs who want to be with us  ... can't come out publicly in support of people who don't want to show respect for the Arab Palestinians. So [Kerry's] right on target with what he’s doing. I just hope the protagonists want peace as much as he does.”

There is, however, a larger and even more urgent challenge facing Washington, as the news from Egypt illustrates. Wars and civil conflict that threaten to make Israel's occupation seem like a relatively manageable and benign distraction, however important, are looming. The sectarian bloodletting that threatens to dominate systems in Iraq and Syria may become a regional contagion, but the terrible price exacted by these conflicts may pale beside the battle that appears to have commenced in Egypt from within the Sunni community between the Ikhwan and Egypt's political-security establishment and its regional allies.

Kerry has suggested that he sees opportunity in this environment, as well he should. After all, his brief is to advance American interests. Period. But what does it say about the Obama administration's priorities that the message to hard-bitten players in the region is that the United States is not a serious party to a resolution of Egypt's crisis, and perhaps, indeed, that it does not seek one.