The Iraqi government is paying more attention to the country’s heritage sites, such as the old Ottoman headquarters of Qishla in Baghdad, writes Omar al-Shaher. 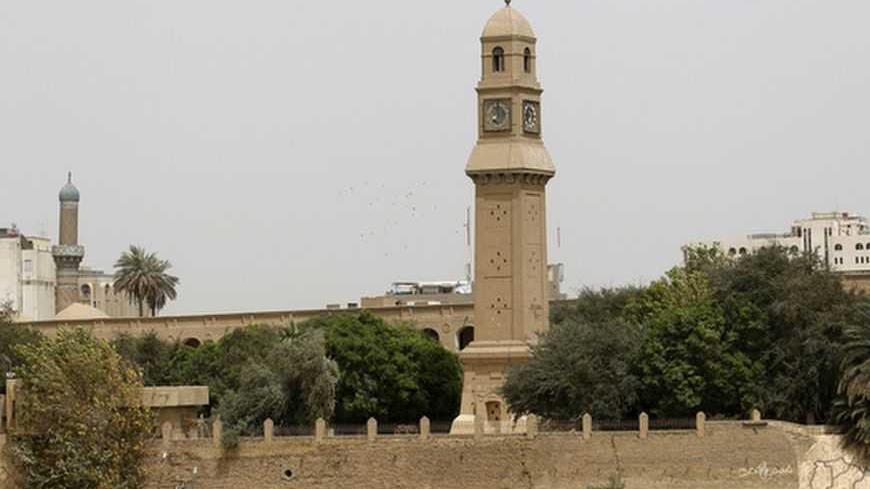 The clock tower of Qishla is seen at noon in central Baghdad, April 2, 2012. - REUTERS/Thaier al-Sudani

At the restoration site of the Ottoman governor’s headquarters, known as Qishla, near the Tigris River in Baghdad, Iraqi journalist Imad al-Khafaji said, “I feel, as the work proceeds, that we are builders.”

A few months ago, the Iraqi government launched a campaign to restore the building of Qishla, built by the Ottomans in Baghdad in 1855 to serve as the headquarters of their forces. During the 1920s, it was transformed into a serail. Nowadays, it is known as the “old Green Zone,” in reference to the "Green Zone" in Baghdad where many government facilities are located.

“I was glad to see the restoration works moving so fast. Reviving the Baghdadi architecture of this site is an achievement by itself,” Khafaji, a well-known television figure, said. Khafaji believes that letting people into the site before the renovation is completed is a way of showing transparency to the modern world.

“It means that you see things as they grow; they are not accomplished in the shadows. Such works are no longer a clandestine ritual as they used to be,” he added.

According to Khafaji, “We spent significant amounts of money on other projects, while this place was neglected for years. We lost tourist investment here while we have spent a fortune on spurious projects.”

Taking a tour of the site, the governor of Baghdad, Salah Abdul Razzak, said, “The initial idea of this project was to restore the Qishla tower clock. We included this project in last year’s allocations and, indeed, renovated and set the clock in operation in a way that preserves its historical architectural style.

“When we first came to this place to renovate the clock, it was abandoned and cluttered with litter and wreckage. So we decided to renovate the whole site. We brought a certain type of brick called ‘farshi’ from the province of Karbala, since it suits the general environment of this place and preserves the familiar aspect of such historical sites."

“Our project is to establish gardens on the site and transform a part of its buildings into an antique market that features traditional items, paintings, rugs and more. It will open the door for people to look around and encourage economic activity. The project also involves establishing restaurants of different cuisines such as Turkish, Iranian, Moroccan, Lebanese, Egyptian and the list goes on. We want to offer Iraqis the variety they seek during their visit to this site,” Razzak said.

“In addition to a rich cultural variety, we want to create economic activity, for without it, neither this place nor any other would be able to provide for itself. If we keep waiting for annual budgets that probably do not allocate any amount for such projects, the chances for these places to successfully remain active are very limited,” he added.

Speaking about the cost, the governor said, “I can say that the cost of renovating the clock tower was less than $60,000, while the other costs are variable because the work is still in progress.”

Mahdi al-Hafez, the former minister of planning, said while walking around the site, “This project is very important to the history of Iraq, and its future as well. These historical sites should be rehabilitated since they constitute a part of the treasures and culture of this country.” Hafez considers this initiative highly important and believes that it is gaining much-needed attention from the relevant authorities.

Work on the site did not cease during the official holidays.

“For months now, 60 architects, workers and drivers have been working nonstop on this site. We even work during holidays. We want to be done with this project before the conference of Baghdad Arab Capital for Culture starts in mid-March,” foreman Majed Kamil said.

In March, Iraq is organizing a cultural conference titled "Baghdad: The Arab Capital of Culture 2013" as part of a tradition in the Arab capitals.

“We have already finished 90% of the work; the budget of this project derives from the yearly allocations of Baghdad and not from the budget of the upcoming conference,” Haidar Abdul Sada, an architect working for the Ministry of Tourism who has been assigned to observe the restoration works, said.

“The tower clock of Qishla is one of the world’s oldest clocks. We can find a similar one in Ukraine, yet this one features an unadulterated Iraqi, Baghdadi characteristic,” Sada added.