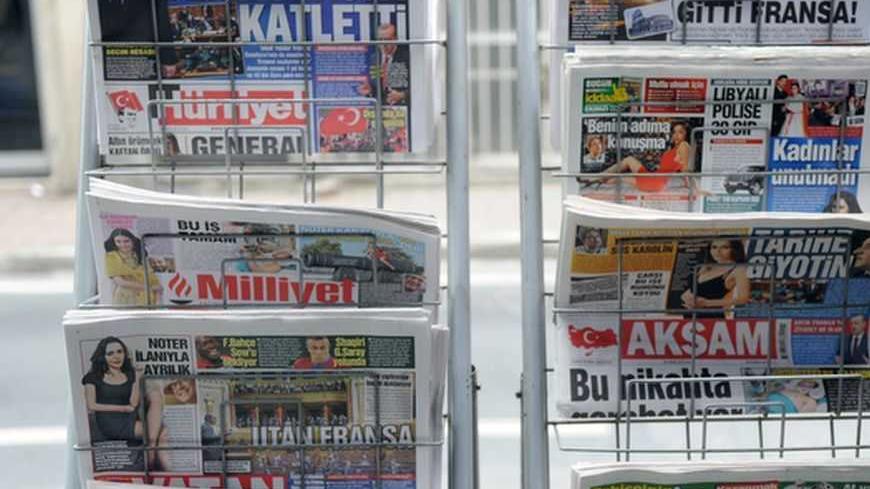 Newspapers are displayed at a newsstand on Jan. 24, 2012 in the Karakoy neighborhood of Istanbul. - BULENT KILIC/AFP/Getty Images

When Prime Minister Recep Tayyip Erdogan slams the Turkish media, which is quite often, the world listens. Therefore, there is no reason to be surprised about either Bahman Hosseinpour, Iran’s ambassador to Ankara, blaming the Turkish media for the rocky state of relations with Turkey, or the silence of Turkey’s ruling party in return.

To recap, Hosseinpour attended a farewell reception in his honor on Feb. 19. According to Hurriyet, the ambassador said, “There are some who want to damage ties between the two countries [Iran and Turkey]. Be careful that your writing should not damage ties.”

Hosseinpour specifically targeted the coverage of Zaman and Today’s Zaman on Iran.

“The Zaman daily does not pay any attention, and publishes articles seeking to strain the relations between our two countries,” said the Iranian ambassador. “Whenever there is negative news about Iran, this media group tries to make sure the West learns about it immediately. This media group is publishing all this news against Iran.”

Hosseinpour went on to say, “We know very well where this media group takes its directives from.” Today’s Zaman, and the Zaman daily are known to be media publications of the Fethullah Gulen religious movement. It wasn’t, however, clear who the ambassador was pointing at. “Zaman is publishing such articles as if the Iranian firms established in Turkey are serving other purposes. But this media group does not raise any opposition to Western or Zionist capital coming to Turkey,” the ambassador said.

Truth be told, not that there has been an Israeli ambassador in Ankara since 2010, but if the envoy of the Jewish state were to slander the Turkish media in such a fashion, there is no doubt that these publications as well as the ruling party members would be calling for his immediate departure from the country. Even if he were a departing ambassador like the Iranian one, they would not hesitate to make his last few days in Turkey as painful as possible.

That said, Iranian authorities are using the adversarial relationship between the Turkish government and its media to their benefit. On Feb. 11, Mohammad Ali Esfanani said, for example that, “Although some journalists in Turkey have leveled criticism against the ruling system of the country, they cannot be suppressed on the [unsubstantiated] charges of being terrorists.” He also highlighted that there are “450 cases of freedom-of-speech violations in Turkey at the European Court of Human Rights, which indicates the lack of freedom of expression” in Turkey.

That is very true, too, but Turks by and large would take offense to Iran presuming to teach them anything on the freedom of the media. Therefore, there really is no mountain to make out of this molehill, but Turkey’s ruling party may take this incident as an opportunity to think about the impact of their words and how — like in this instance — the media can also be slandered by foreign powers. That is, if they really care about the freedom of the media.