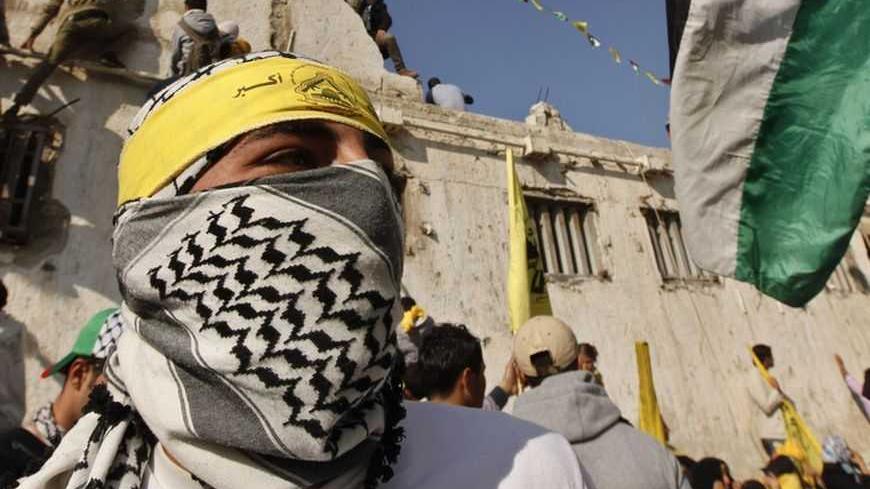 The Feb. 20 event held at the PLO offices in Ramallah was supposed to produce a warming of relations between the Islamic Resistance Movement (Hamas) and the various PLO groups led by Fatah.

At the podium was Dr. Abdel Aziz Dweik, the former head of the Palestine Legislative Council, who was elected after the decisive 2006 victory of the Islamists. Next to him was Dr. Hanan Ashrawi member of the PLO’s executive Committee responsible for culture and communications. And next to her was Azzam Al Ahmad member of Fatah’s central committee and its point man in the reconciliation talks.

Instead of warming relations, the meeting exploded. The Youtube video that shows part of the verbal exchange begins with Dweik angry at something Abbas said; he gets up and decides to leave the meeting, calling on others to follow suit. A seated Azzam Al Ahmad begins a tirade of attacks, telling the elder legislator that he is running away from responsibility; and he ends his assault by accusing the former speaker of being opposed to any reconciliation, and that before Hamas was created, he (Dweik) was at times coordinating his activities with none other than former Israeli defense minister Yitzak Rabin.

The video, which has received nearly five thousand views, has poisoned the atmosphere at a time when it appeared that all elements of a reconciliation deal were coming together in a synchronized way.

Hamas leaders had allowed the return of the Independent Election’s Commission to Gaza and they have indeed started to register voters. The registration drive was so successful that it was extended two days to enroll as many people wanting to register as possible.

The new government to be headed by Mahmoud Abbas was being discussed and Abbas had stated that a decree would be issued as soon as an election date was agreed upon. And finally the reconstruction of the PLO seemed also to be going in the right direction.

But reconciliation processes that are imposed, rather than agreed to by the grassroots, can’t go very far since any small incident might derail them.

This is what appears to have happened late in February after the Dweik-Ahmad exchange. The Fatah central committee met and issued a strong statement saying that they support their representative to the talks and Hamas-supported media began issuing statements saying that Abbas and the PLO really don’t want the reconciliation to move ahead, at least until they can see what US president Barack Obama is bringing with him when he arrives in the region in the second half of March.

Footage of the angry exchange

Privately, activists from both sides say that they don’t see a genuine desire to risk giving up the interests and standings they have to elections in which they can’t predict its results. One major disagreement appears to be whether the legislative and presidential elections in Occupied Palestine should proceed the elections for the renewed Palestine National Council. Both sides are worried that if they lose either election they would be stripped of the powers and jobs that they have grown accustomed to.

Waiting on the sidelines, of course, are the Arab donors — especially Saudi Arabia and Qatar — who are consistently on record as pushing the parties to find a resolution to their differences and implement the unity of Gaza and the West Bank under a single leadership.

While Hamas accuses Abbas or dragging his feet until Obama arrives, the PLO is worried that a deal with Egyptian president Mohammad Morsi to regulate the situation in Rafah could help embolden Hamas. The deal, however, had a twist that seems to have caught even Hamas leaders by surprise: The Egyptian prerequisite to a new Palestinian-Egyptian border arrangement (in contrast to the existing Oslo-mandated arrangement) includes the need to totally and completely end the tunnel trade. Egyptian engineers have discovered that water could be the best way to stop tunnel activities and have since been drowning all existing tunnels from their side leaving Palestinians screaming that this would encourage the Israeli mandated siege.

Whatever the minor details are about who said what in that Feb. 20 meeting, it is clear that the idea of Palestinian-Palestinian reconciliation is still far from being implemented, at least in the foreseeable short term.