Most Iraqis Unaware Of Insurance Rights

While the Iraqi government provides insurance for a variety of claims to all its citizens, many are ill-informed or simply unaware of their rights, reports Omar al-Shaher. 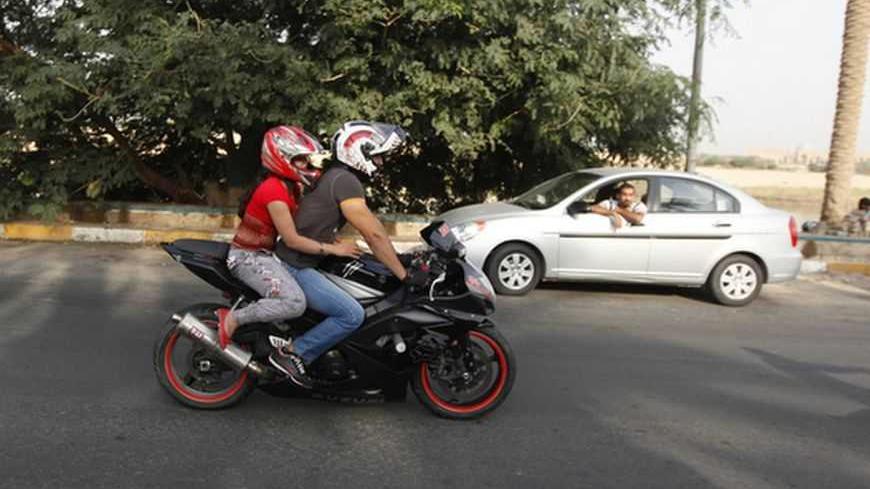 An Iraqi couple ride a motorbike during a bike show on Abu Nawas Street in Baghdad Oct. 19, 2012. - REUTERS/Saad Shalash

Few Iraqis are confident that their lives on the roadways are insured. In the event that they are in a traffic accident, they will receive appropriate compensation with no need to sign insurance contracts or pay monthly or annual premiums. The National Insurance Company of Iraq deducts a part of automotive fuel revenues from all Iraqi gas stations to insure drivers and pedestrians.

Nevertheless, Iraqis who are in road accidents usually settle the matter with the other driver involved in the accident, without referring it to the insurance company or even discussing the matter at any other level.

According to official Iraqi statistics, about six times as many people die from road accidents than bombings. The insurance company, however, does not provide any statistics about the insurance beneficiaries among these victims.

According to Iraqi economist Shaker Mahmoud, “Iraqi people lack knowledge about insurance; therefore, victims of road accidents do not submit insurance claims.” He added, “The Iraqi National Insurance Company is obligated  to compensate people who are the victims of traffic accidents even if they have not signed any insurance contracts with them. The company receives a share of automotive fuel revenues as insurance on the lives of all Iraqis."

He said, “Insurance is like a form of compulsory saving. It is as if you were deducting 5% of your income and paying it to the insurance company for ten years. In the event you had an accident the next day after signing the insurance contract, your family will immediately receive 5% of the income of the head of the household multiplied by ten years.”

“If the insured person does not get into any accidents, after the insurance policy expires, he can recollect the accumulated amount from the company,” he added.

In Iraq, there are three governmental companies and about 30 civil insurance companies, yet the National Insurance Company insures the largest percentage of people.

He said, "They offered to re-insure my assets through another company with capital higher than these assets. But this increases the cost of insurance, so I chose the National Insurance Company and signed with it."

He added, "I have been a customer of the government company for years, and I receive compensation for the damages incurred on my company assets according to the contract signed between us."

Experts believe that "the weak activity of private insurance companies is due to the fact that Iraqi government departments require that the private companies with whom they deal have insurance contracts from state-owned companies, not [private] ones."

Mahmoud says that there is significant activity by the private insurance companies, but they need encouragement from the state. He said, "In one case, a large commercial complex in the New Baghdad district caught fire, and it was found that a shop owner in the complex had insured his assets with the private company RED."

He added, "The shop owner received compensation from the company for the damage incurred by the fire. He hung a large banner at his shop door saying that the insurance company paid him the compensation owed."