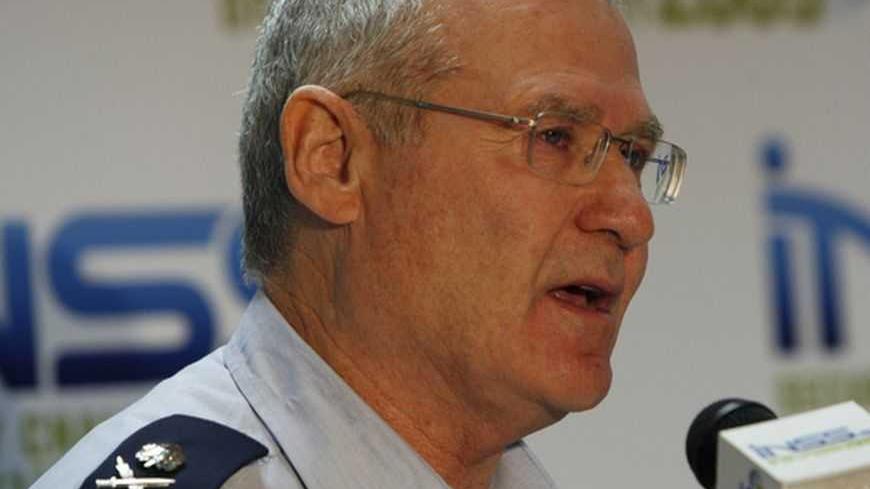 Major General (res.) Amos Yadlin had served as head of the IDF Military Intelligence Directorate (Aman) until two years ago. In Israel, the head of Aman is viewed as the country’s “national evaluator,” the man who heads the Subcommittee for Intelligence and Secret Services, a forum in which the Shin Bet and Mossad chiefs also participate, together with the prime minister’s military secretary. At the end of the day, Israel’s national intelligence assessment is in the hands of Aman, the organization that dominates the lion's share of Israel’s first-rate and extremely experienced intelligence community. The role of Aman chief is Israel’s most sensitive, most responsible and most explosive position in the country.

Yadlin is a cautious and reserved man, an outstanding air force pilot who participated in the bombing of the Iraqi reactor. He was born to a political family (his father, Aharon Yadlin, was education minister). He nurtures gentlemanly manners and European breeding in the heart of the rough-and-tumble Middle East. He is partner to some of the incisive criticism brought against Israel’s captains by his colleagues, former Mossad head Meir Dagan and former Shin Bet head Yuval Diskin, but he is careful to express his criticism with the utmost discretion and not air it in the public domain.

He was also partner to the efforts of Israel’s highest security echelons, involving then-chief of staff Ashkenazi, Shin Bet head Diskin and Mossad head Dagan, to forestall Prime Minister Benjamin Netanyahu and Defense Minister Ehud Barak’s manipulations to drag the State of Israel into hair-raising, superfluous and premature escapades between 2008 and 2011. In contradistinction to many others, when Yadlin finished his illustrious military career he did not choose to “look after his own interests,” but continued doing more or less what he had done before, under a different banner. Now he is director of Tel Aviv University's Institute for National Security Studies, which is perhaps the single most prominent and important defense-security research institute in Israel.

A day or two before, Netanyahu had repeated his mantra to help him assemble “as wide a government as possible,” and raised the Iranian issue to the top of our worry list. Netanyahu, a worrywart of international repute, inflated the dangers and threats hovering over our fragile state, as is his wont. Immediately afterward, he tried to urge his potential coalition partners to leave their petty interests aside and come home to “rally round the flag.”

And then along came Yadlin. His assessment was full of optimism, with more good news than danger. Even with regard to the most explosive subject of all — the Iranian nuclear issue — Yadlin lowered the flames by saying there is no certainty that 2013 will be a “year of decision.” After all, previous years — 2012, 2011 and even 2010 — had been labelled similarly, yet they all ended peacefully without any momentous decision. Yadlin estimates that nothing may happen on the Iranian front this year as well, and he gives good reasons to support his view.

We must understand something: When every single year in Israel is defined as the most decisive, critical, dramatic and fateful year in the annals of the state and of the Jewish nation in general — this plays into the hands of the country’s defense-system heads, who continue to maintain a gargantuan defense budget that has ballooned over the last decade to almost twice its previous size. Former prime minister Ehud Olmert recently revealed that Netanyahu and Barak frittered away 11 billion shekels ($3 billion) in the last fiscal year preparing for a potential attack on Iran.

Even if this sum is exaggerated, the principle is clear. “Frightening the people is good for the budget” — that is the way of things in Israel. So Yadlin came along and determined that this year can be another year of stalling tactics. The United States and the rest of the West will soon present a tempting offer to the Iranians, a proposal recently revealed here. It is possible that the Iranians will continue to freeze their progress and prefer to remain in the “attack range” for a bomb, but not to cross the American red line till the storm blows over. This scenario can continue for another few years. According to Yadlin, Israel can definitely live with this situation, which is preferable to “the bomb."

Then there’s the Syria Issue. Recent months have seen the Israeli public subjected to a fright campaign regarding what awaits us on the day after Syrian President Assad's departure. Yet no one knows when that day will come, if ever. A series of doomsday forecasts were prophesied and then disproven, one after the other. Assad has been fighting the rebels and vice versa for over two years, with no end in sight. The Syria story involves tremendous forces and opposing interests that stir the pot from all sides; thus, Syria cannot really be forecast at the moment.

According to Yadlin’s assessment, Assad’s fall would benefit Israel, in contrast to the official tone that frames even this possible event negatively on the national front. Yadlin also says that in any event, post-crisis Syria will be much less dangerous to Israel than the former Syria was. The Syrian army, says Yadlin, has worn itself out, and will not represent a significant challenge to Israel. Syria’s attention will be directed inward, not outward; there will be much to repair and rehabilitate in post-war Syria. Therefore, in the immediate risk assessment, Syria can be erased as a relevant enemy state for a long period. If this isn’t good news, I don’t know what is.

But for the defense system, this is bad news. The implications of Yadlin’s situation assessment are clear: Israel’s conventional enemies are shrinking and weakening. Egypt is in a similar situation; there, too, attention is focused on internal issues, not external ones. There, too, a fierce struggle is being waged between various domestic entities on the essence and identity of the state. Israel has become a kind of far-off memory. As of today, the main threats that remain are terror, as important and sophisticated as ever, and Iran. All of this, concealed in a parenthetical clause in Yadlin’s situation assessment, signals to us that deep cutbacks in the defense budget are possible without damaging readiness and national security.

There was something else: Yadlin notes and emphasizes the obligation of renewing the diplomatic process vis-à-vis the Palestinians. Israel must put a far-reaching, genuine and courageous diplomatic initiative on the table. There is no immediate threat of a Hamas takeover in Judea and Samaria, he states, but there is a real danger of the collapse of the Palestinian Authority as a partner and as the body that directs and oversees the lives of Israel’s neighboring nation. If the diplomatic process won’t help, says Yadlin, then Israel should shape its future — and also its borders — by itself. In other words, another disengagement.

All this is not bad news for the State of Israel, but it is for Benjamin Netanyahu as he tries to recover from an electoral blow in the elections and form a new government.

Ben Caspit is a contributing writer for Al-Monitor's Israel Pulse. He is also a senior columnist and political analyst for Israeli newspapers and has a daily radio show and regular TV shows on politics and Israel.