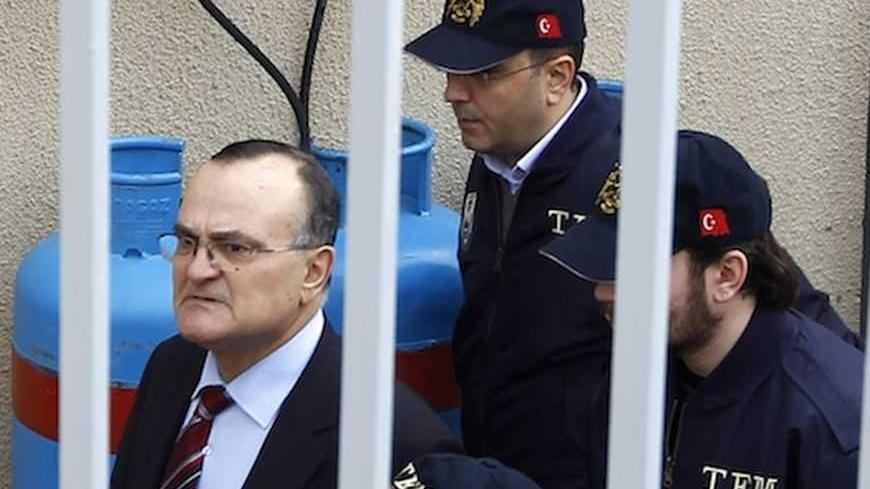 Ergin Saygun, the former deputy chief of Turkey's general staff, is escorted by police officers at a courthouse in Istanbul, Feb. 25, 2010. - REUTERS/Murad Sezer

When the Turkish judiciary finally released Ergin Saygun on health grounds this month, he was already on the operating table with a life-threatening heart infection. Several months earlier, the retired general had shouted at the judge, “You won’t manage to kill me!” as the court rejected repeated requests for his conditional release, ignoring medical reports that diagnosed him with 15 serious conditions and warned against the risk of a lethal cardiac infection.

The dramatic case of the former deputy chief of the Turkish general staff, convicted in a plot to overthrow the Islamist-rooted government, has raised questions about whether denial of proper health care has become a form of additional punishment — and even political revenge — in Turkey’s notorious judicial system.

Attention has focused on ailing inmates in the two mass coup attempt trials, which have deeply polarized Turkey and resulted in the imprisonment of scores of prominent figures. Human rights activists say many others — both political and ordinary prisoners — are languishing in jail without proper medical care, unbeknownst to the general public.

Despite his half-functioning heart and lung, Saygun was kept in jail and then in hospital prisoner ward, guarded by armed soldiers — even as doctors warned that such environments would expose his artificial heart valve to fatal virus attacks. When the infection did happen and Saygun was rushed into emergency surgery, the authorities must have reasoned that “the man is dying, so they’d better get rid of him,” as his daughter Ece Saygun said about the judicial ruling. In 2008, another coup suspect — little-known businessman Kuddusi Okkir — perished from lung cancer under the watch of prison authorities, before he was even formally indicted. In 2011, barrister Yusuf Erikel was granted belated release for cancer treatment only after he threw up blood in the courtroom.

Prime Minister Recep Tayyip Erdogan stepped into the controversy with a move that caught the entire nation by surprise. On Feb. 10, he visited Saygun in hospital to wish him well after the eight-hour surgery. A memorable photo showed Erdogan holding the hand of the man who allegedly plotted to topple him. Many saw the visit as a message that Erdogan is running out of patience with the prosecutors and judges handling the coup cases, whose credibility has waned amid signs of fabricated evidence and serious violations of defense rights.

The government has passed amendments to curb notoriously long pre-trial detentions, facilitate the conditional release of sick inmates and encourage non-custodial trial for defendants who have already spent years in jail without conviction, among them parliament members and journalists.

The courts, however, have largely refused to back down, arguing that the defendants may escape or destroy evidence. Their stance has stoked speculation of a growing rift between Erdogan’s Justice and Development Party (AKP) and its chief political ally — the influential community of Islamic preacher Fethullah Gulen, whose followers are believed to largely control the judiciary.

Following Saygun’s release, the media spotlight has shifted to another prominent prisoner: Fatih Hilmioglu, a former university president known for his tough enforcement of the now-defunct campus ban on the Islamic headscarf. Hilmioglu was already a cirrhosis patient when he was arrested in 2009 for suspected involvement in coup conspiracies. While in custody, his lawyer says he was diagnosed with early-stage liver cancer. In the two years since, he hasn't even received a biopsy. As the trial dragged on, Hilmioglu developed diabetic issues and kidney problems. When the authorities finally decided to transfer him from the prison into hospital last week, they chose a psychiatric clinic — to treat him for depression.

The academic’s brother and lawyer Hayati Hilmioglu, has said the situation amounts to “a summary death sentence.” Popular columnist Ahmet Hakan has called it a “murder” in the making, and denounced “primitive feelings of vengeance” against a man seen as “a relentless enemy of the headscarf.”

About 20 others behind bars in the coup trials are said to be stricken with serious diseases but deprived of proper treatment. None of them has been convicted yet.

Sebnem Korur Fincanci, head of the Human Rights Foundation of Turkey, says she believes denial of health care is often used as a tool of “extra punishment” and “revenge” against inmates perceived as social underdogs or political adversaries.

"A prison guard, for instance, would act along the norms of his own social group, and [victimize] those he perceives as ‘the other’ — for instance, homosexuals," Fincanci told Al-Monitor. "There is also the political aspect. At present, the [Islamic] communities, which are said to have become influential within the state, are targeting those whom they see as the symbol of their past suffering, like the military and those who were supportive of the military."

Activists say the problem of health care in Turkey’s jails is rampant and that, unlike for political prisoners, the plight of ordinary inmates goes unnoticed. In October, the U.N. Human Rights Committee listed a series of concerns about Turkey, including detention conditions and the fact that “prisoners are frequently deprived from timely access to adequate health services.”

Statistics on the issue are sketchy and emerge mostly through parliamentary inquiries submitted by opposition members of parliament. Last year, the justice minister put the number of seriously sick inmates at 520. In response to another question, he revealed that 1,634 inmates died over the past decade, and that prison deaths rose from 89 in 2002 to 268 in 2011. However, he did not specify how many perished as a result of inadequate health care.

Letters sent by inmates to the Civic Society in the Penal System (CISST), an advocacy group for prisoner rights, paint a picture of a frustrating environment where a combination of red tape, understaffing, indifference and arbitrary practices impedes prompt access to medical care — and often delays treatment in cases where time is a critical factor.

“A doctor is available only during certain hours on Tuesdays and Thursdays. There was no doctor on the day I suffered a heart attack. I was at the mercy of the health worker who arrived in the ambulance, and thankfully he said I must be taken to hospital,” a prisoner writes. Another says his bladder cancer was diagnosed a year after the symptoms appeared as prison officials “kept putting me off or deliberately ignored me.” A woman receiving radio-therapy complains that a trip to the hospital and back to prison takes eight hours because she is transported in a vehicle that takes also other inmates to hearings at the courts.

“We are faced here with a cruel and ruthless state,” CISST chairman Zafer Kirac told Al-Monitor. “The prison system cannot be left to the state alone. It needs transparency and civic scrutiny.”

Sibel Utku Bila is a freelance journalist based in Ankara who has covered Turkey for 15 years.