Daoud Kuttab writes about the bid of Nayef Hawatmeh, leader of the Democratic Front for the Liberation of Palestine (DFLP), to visit the occupied Palestinian territories for the first time. 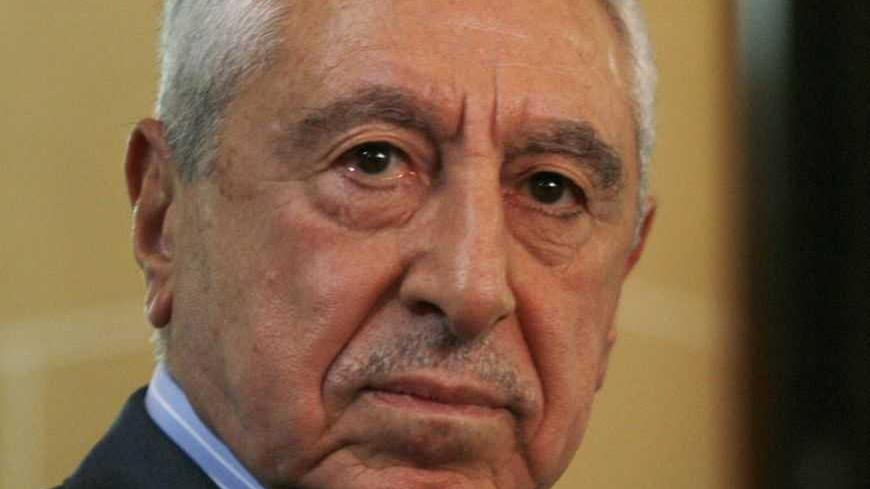 Officials in the Palestine Liberation Organization have confirmed that the leader of the Democratic Front for the Liberation of Palestine (DFLP) — currently based in Syria — is asking once more for a chance to come to the Occupied Palestinian Territories (OPT).

Nayef Hawatmeh, born in the Jordanian city of Salt in 1938, has led the DFLP since 1969, but has not yet been able to visit Palestine even though his PLO faction is allowed to work there. Since the PLO and Israel exchanged letters of recognition in 1993, Hawatmeh, along with other Palestinian leaders, was granted a national ID card that technically allows him to enter into Palestinian areas. After the signing of the Oslo Accords, Hawatmeh refused to enter the OPT, criticizing the agreement reached in secret in the Norwegian capital a “sell out.”

Hawatmeh later agreed to enter and was on the verge of doing so in 1999 until he enraged the Israelis to the extent that they announced that he would not be allowed to cross the Israeli-controlled Allenby Bridge. Hawatmeh’s "error" in Israeli eyes was an interview he gave that year to Qatari satellite station Al-Jazeera. Asked whether he still supported the armed struggle, Hawatmeh answered in the affirmative.

Israelis have a bloody history with Hawatmeh and his guerilla group, blaming them for a botched military infiltration attempt from south Lebanon in 1974, with guerilla fighters entering the northern Israeli village of Maalot. After a two day standoff in which DFLP fighters had held 115 hostages, a battle ensued resulting in the death of 25 Israelis, including many children, as well as the Palestinian fighters.

The DFLP split off from the left-wing Popular Front for the Liberation of Palestine (PFLP) headed by George Habash.  It was credited in the 1970s with developing what is referred to as the "transitional plan," which calls for Palestinians to establish a state on any territory that the Israeli army withdraws from. This 10-point-plan later became the policy of the PLO and is seen as the basis of the Oslo Accords in which Israel agreed to withdraw initially from Gaza and Jericho.

Hawatmeh’s faction suffered a loss of popularity after the Oslo Accords. A number of Hawatmeh’s deputies returned to Palestine with Yasser Arafat, among them Yasser Abed Rabo who had been a member of the PLO’s executive committee representing the DFLP. Unhappy with the hardline position that Hawatmeh had taken from the Oslo Accords, Abed Rabo and others, including many local DFLP activists, split off from the DFLP and formed a new faction called Fida, of which Abed Rabo became secretary general.

It is unclear whether the Israelis will now grant the aging Palestinian leader permission to return to Palestine. The calls for his entry have increased because of the difficult situation in Syria, where the DFLP secretary general has been living for decades, although he has been seen regularly in Jordan in recent years.

The DFLP had in the past attracted many Palestinian intellectuals who felt it provided them with a home that was neither populist like Fatah nor radical like the PFLP. However, the high days of the 1970s, in which Hawatmeh along with the late Habash and Arafat were seen as the face of the Palestinian revolution, have long passed. Support for pro-DFLP student council candidates in Palestinian universities, which is often seen as a barometer of activist support, has trickled down to near zero in recent years. DFLP activism has also diminished in the diaspora which was once the organization’s main source of support and financial backing.

If the Israelis eventually decide to turn down the aging Hawatmeh’s request to enter into Palestine, it will be mostly because of political spite rather than any security or political threat.