Fatah-Hamas Reconciliation Would Be a Reset for PLO

The PLO has gone through a number of changes throughout its history, and if Hamas and Fatah agree on a reconciliation deal, it'll be set for another revamp, Daoud Kuttab writes. 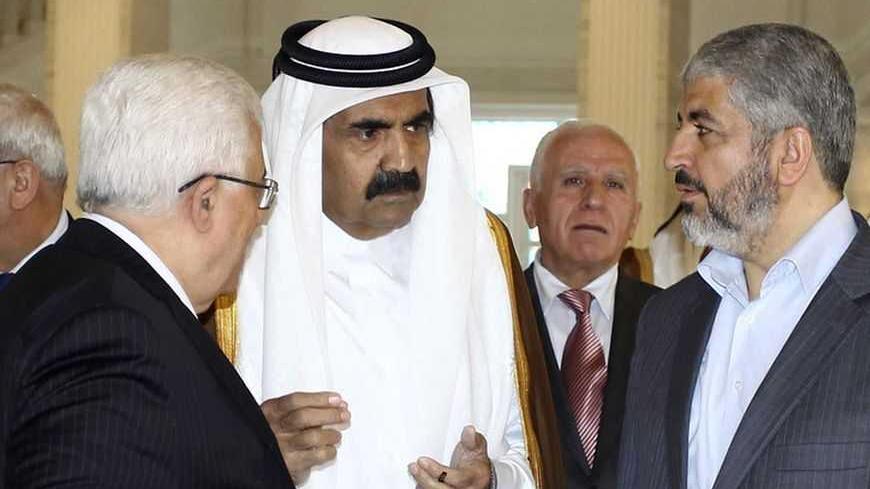 A liberation organization was established in the early summer of 1964. Since then it has gone through shifts of ideological direction as well as leadership changes. Change is expected again.

With support and encouragement from the Arab League, the Palestine Liberation Organization was established with the goal to liberate Palestine and to ensure the return of Palestinian refugees.

Palestinian delegates attending the official launching session at the Intercontinental Hotel on the Mount of Olives elected on June 10, 1964, Ahmad Shukeri as its first chairman. Since then the PLO has witnessed a successful bid by guerrilla fighters to take it over as well as attempts to split it, weaken it or diverge it from its publicly stated goal of being the arm of the liberation of Palestine.

After the naskeh (setback) of June 1967, Shukeri was replaced by Yehua Hammuda, but the real change to the organization occurred on Feb. 2, 1969. when the armed Palestinian movements led by Fatah decided to join the organization and basically take it over. Yasser Arafat became the chairman of its executive committee and remained so until his unexpected death in November 2004. His deputy Mahmoud Abbas has run the organization since.

Under Arafat and other PLO fighters, the organization was able to successfully unify Palestinians and, despite a concerted effort to label all Palestinians as terrorists, the PLO succeeded in gaining Arab and world recognition as the embodiment of Palestinian national aspirations. The PLO went through its own internal split triggered by a pro-Syrian general after standing up to the Israeli machine in Beirut in the 1980s.

The terrorist label continued throughout the 1980s and 1990s, but thanks to a relatively nonviolent Palestinian intifada and a concerted international effort led by then U.S. Secretary of State James Baker, a peace conference took place in Madrid. While delegates were talking in Washington and other capitals, the leaders of Israel and the PLO agreed to recognize each other and begin what is now referred to as the Oslo Process.

Now as the Oslo process comes to a near end, and the Palestinian Authority established as a result of it also loses steam, many Palestinians are again looking to the PLO as a possible answer. While Islamic militants have continuously refused to recognize or accept the PLO as the sole representative of the Palestinians, a change of heart is producing an opportunity not only for national reconciliation in Gaza and the West Bank, but also the rejuvenation of the PLO.

Media reports are talking about the possibility that the leader of Hamas might become the next head of the new PLO. Meetings that Khaled Meshaal had with the Jordanian king and other officials in Amman last week hinted that the PLO route might be the way that Hamas can climb down the tree of refusing to accept international/Israeli requirements that include recognition of Israel and acceptance of agreements signed by it. If Hamas does join the PLO, it will de facto comply with these demands because of the mutual recognition that the PLO’s Arafat signed with late Israeli Prime Minister Yitzhak Rabin in September 1993.

The renewed PLO will need a number of prerequisites to see the light of day. The new PLO will not emerge without the long-awaited parliamentary elections in the West Bank and Gaza. According to the PLO’s internal regulations, the elected members of the Palestinian Legislative Council are automatically members of the Palestine National Council, which in turn elects the PLO’s executive committee. Once elections take place inside the occupied state of Palestine, choosing the remaining delegates are expected to take place in other locations where Palestinians live.

The only exception to the diaspora elections issue is Jordan, where all PLO factions have agreed that the 65 delegates assigned to Jordanian diaspora Palestinians will be agreed to by consensus rather than through elections. Jordanian Palestinians are granted citizenship in Jordan and therefore any attempt at holding elections will raise red flags of dual loyalty. Some press reports have also indicated that delegates from Syria and even Lebanon might also be agreed to go through the consensus process because of difficulties of organizing elections there.

In addition to the procedural issues and the need to address the status of Palestinians in the diaspora, the renewed PLO will most certainly have to deal with a major worldwide movement that is widespread among Palestinians and their supporters. The Boycott, Divestment and Sanctions (BDS) movement has been gaining ground throughout the world and has had impressive success stories although it still has a long way to reach the success that South Africa’s anti-apartheid movement accomplished. In recent years, the Palestinian leadership has taken a much more active public role in adopting nonviolence resistance as the main mode of supporting the negotiating process. However, support for BDS has not been adopted officially and practically by the PLO and its various organs. A renewed PLO will certainly have to deal directly with this issue, which will most probably put the Ramallah-based leadership in a difficult position both in regards to its foreign relations as well as in regards to its interaction with the Israeli government and occupation forces.