Once a high-profile Palestinian resistance movement, the Popular Front for the Liberation of Palestine is today a shadow of its former self. 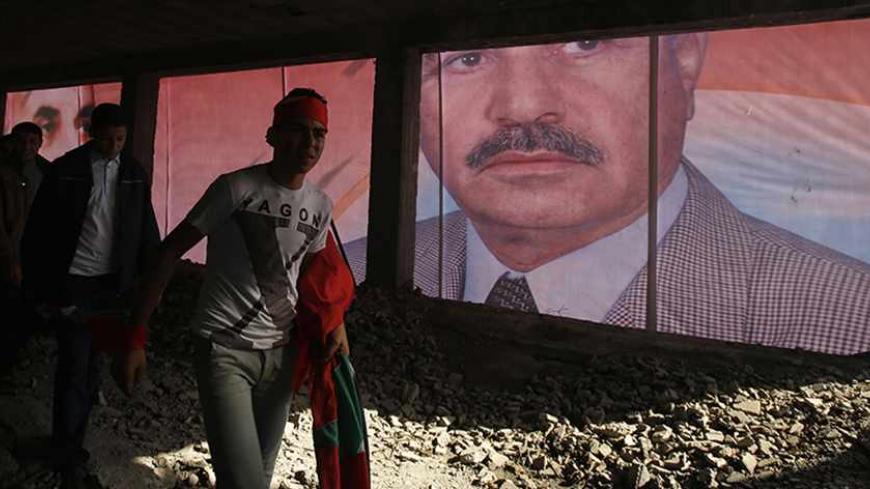 A poster of late leader of the Popular Front for the Liberation of Palestine (PFLP) Abu Ali Mustafa is seen during a rally marking the 46th anniversary of the movement's founding in Gaza City, Dec. 7, 2013. - REUTERS/Suhaib Salem

Mention of the Popular Front for the Liberation of Palestine (PFLP) used to arouse fear and intimidation in Israel and around the world. The radical Palestinian organization founded in the late 1970s by George Habash, a Palestinian Christian physician from Lydda, became a household name after it carried out spectacular airline hijackings and other daring acts.

On Dec. 7, its acting chairman, Abdel Rahim Malouh, and a number of its senior leaders quietly resigned from the faction, which is under the umbrella of the Palestine Liberation Organization (PLO), without anyone paying much attention. Malouh told local Palestinian media that he had submitted his resignation in 2010, but that it took effect on Dec. 7. Others who resigned at the same time include Jamil Mejdalawi, Younis al-Jaro and Abdul Aziz al-Qarayah. Malouh has said that he will retain his seat as a member of the PLO’s Executive Committee. What has happened to this faction that the Israelis once considered a terrorist organization?

Many would argue that the hoopla around the Marxist PFLP was undeserved. True, the group carried out spectacular acts of violence, such as airplane hijackings, the most famous one involving the diversion of a passenger jet to the Jordanian desert in 1970. In fact, however, the PFLP killed only a few people. Given today’s cutthroat brand of terrorism, indiscriminate car bombings and beheadings, this once supposedly radical organization appears by comparison to be a humble lamb.

Even the Israelis acknowledged that their incitement against the PFLP had been exaggerated when they allowed PFLP senior leaders to return to the Palestinian territories after the signing of the Oslo Accords. Habash, however, never returned. He resigned in 2000 and died in Amman in 2008. He was replaced by Abu Ali Mustafa, one of the PFLP leaders allowed to return.

The outbreak of the second intifada in 2000 put pressure on Palestinians, including the new PFLP leader and his organization, to join the military resistance. Mustafa, who had shown more interest in popular resistance than violent resistance, was assassinated in his Ramallah office in an Israeli Apache-launched rocket attack.

Ahmad Saadat replaced Mustafa and vowed to avenge his assassination. In the process, PFLP members did what no other Palestinian has been able to do — kill a sitting Israeli cabinet minister. They chose Rehavam Zeevi, a right-winger calling for the expulsion of Palestinians. The Israelis found the Palestinians who shot Zeevi in an Israeli hotel in East Jerusalem, but continued to hunt for those who had sent them, focusing on Saadat.

In accordance with Palestinian-Israeli agreements, anyone accused of a crime that requires a sentence of more than seven years in jail should be incarcerated in the Palestinian areas. Saadat was thus arrested by the Palestinian police and held in a Jericho jail. The Israelis, however, were not satisfied and in 2006 sent troops to Jericho to surround the prison and seize Saadat, who was then sentenced to 30 years in an Israeli prison.

The PFLP, popularly known as al-Jabha, over the years became more of an organization of intellectuals in the West Bank, tending to recruit educated Palestinians. While still a leading member of the PLO, it has long been eclipsed by Hamas and other Islamist organizations in the role of the radical opposition. Malouh and top PFLP leaders had remained relatively low profile and had gone along with whatever PLO Chairmen Yasser Arafat and Mahmoud Abbas decided, although continuing to act in loyal opposition.

In jail, Saadat has been involved in a number of hunger strikes and is well respected among many Palestinians for his commitment to the Palestinian cause. He is said to have moved away from the two-state idea. In a written response to questions from Reuters in 2010, Saadat said that the only solution to the conflict between Israelis and Palestinians is a binational state: “The solution is the one-state solution and not the two-state solution. There are no other horizons for any other settlement."

Now that Malouh's resignation has taken effect, it is unclear who will replace the acting head of the organization. The only other well-known figure is Khalida Jarrar, an elected member of the Palestinian Legislative Council.

The PFLP is unlikely to regain its former footing or standing. Once it stood as the second most popular Palestinian faction, after Fatah. PFLP supporters carrying red flags with a map of historic Palestine on them continue to appear in demonstrations and at other public events, but their real power and impact has clearly diminished.