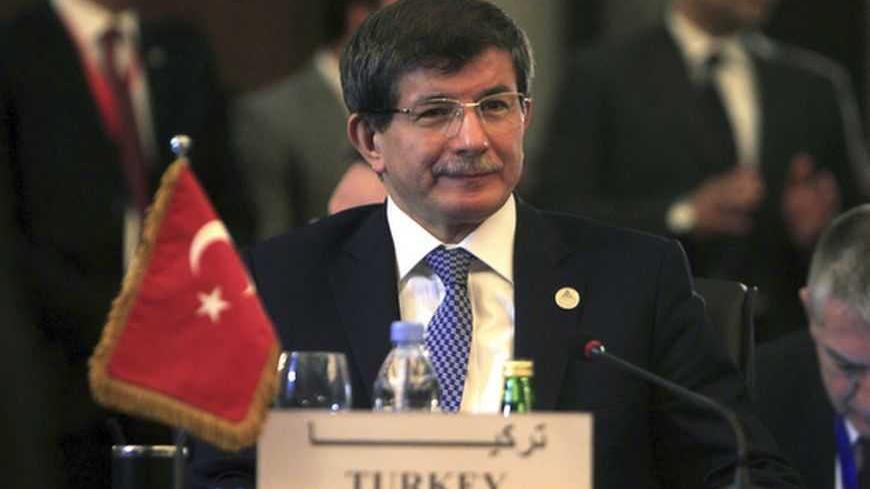 I have given a lot of thought to the questions you raised at a press conference just before flying off to an international security conference in Munich.

“Why didn’t Assad throw even a pebble when Israeli jets flew over his palace and toyed with the dignity of his country?” you asked, and to avoid any misunderstandings, added, “Why did the Syrian army, which has been attacking innocent civilians for the past 22 months, fail to respond to this attack by Israel?”

I have no good answers to these questions. I don’t even know if they were intended to irritate Syrian President Bashar al-Assad, who was once a close friend of yours, or to provoke the Israelis. It seems to me that both answers are correct.

What seems strange to me is that a diplomat like you would allow himself to stir up war and heat up the region with such ease. To exacerbate matters, you did this on the very day that a terrorist blew himself up at the entrance to the American embassy in your capital, Ankara. I find it odd, Mr. Davutoğlu, that you know exactly what terrorism is, as do all the citizens of Turkey. You know how terrible it is when a suicide bomber blows himself up in a bustling modern city, killing innocent people indiscriminately.

What does one thing have to do with the other? If you can even ask that, my dear Mr. Davutoğlu, I can only assume that you don’t care if, as reported by foreign news sources, Israel’s attack in Syria was intended to prevent the flow of deadly weapons to terrorist organizations such as Hezbollah, which supports Assad, the very man who continues to slaughter his own people, and who was, until recently, a close friend of yours.

As Israelis, we are long used to the fact that you and your prime minister, Recep Tayyip Erdoğan, never miss an opportunity to lash out at Israel, but this time you have gone too far. A foreign minister should seek to promote dialogue and other peaceful solutions to conflicts. Your statement, however, only added more wood to the proverbial fire that is the Middle East. In other words, you tried to instigate conflict. But why would you do a thing like that? Would you like to see a war erupt between Syria and Israel?

I have seen the consequences of terrorism in Istanbul. Do you remember the bombing of the HSBC Bank in November 2003? Al-Qaeda blew up a truck bomb near the bank’s headquarters in Istanbul. The blast was so powerful, it nearly caused the enormous building to collapse. This happened just one week after another bombing, this one of two synagogues in Istanbul. These attacks were followed by one bombing after another. I came to Istanbul and saw the panic in the streets. I heard people asking each other how they can defend themselves against such attacks. What can they do, they wondered, to stop a group of madmen who have no inhibitions?

But that still did not meet the same level of fear that we Israelis have experienced over the past decade. From 2001 to 2004, during the Second Intifada, almost one thousand Israelis were killed in suicide bombings. We knew exactly who sent the terrorists to blow themselves up in buses, malls and nightclubs. We had no problem finding the fingerprints of the very people who sent those bombers. Hamas and Islamic Jihad assumed responsibility and even boasted of killing innocent civilians, including many children.

Then Erdoğan turned his back on Assad and began threatening him over the genocide he was committing against his own people. I thought to myself that this new policy must be motivated by humanitarian concerns. He did indeed take a bold step when he declared, “Enough! I will not tolerate the murder of innocent civilians in a neighboring state.” You did, after all, open up your borders to take in hundreds of thousands of refugees from Syria, and you set up tent encampments to house them.

And it reminded me, Mr. Davutoğlu, of another, similar camp set up in your country, in İzmit, this one by Israelis. The camp was a symbol of the good relationship enjoyed by our two countries and even more so, by our two peoples. But those relations have become an ever more distant memory as the incitement intensified, as evidenced by your recent proclamation.

Many thousands of homes collapsed like a house of cards as a result of the disastrous earthquake that struck your country in August 1999. There were almost 10,000 casualties, and a million more were left homeless as a result of this natural disaster. We were once friends, and as such, we were the first nation to send a military rescue team from our Home Front Command to provide your country with help in extracting survivors from beneath the ruins. Another plane brought blankets and medicine, and immediately after that, Israel set up an enormous caravan site to house entire families that lost all their possessions.

I remember how I roamed the streets of Istanbul, Çınarcık, and İzmit back then. People recognized me as an Israeli journalist and greeted me with warm handshakes. “Friend! Friend!” they said as they kissed three fingers and held them to my cheek, signifying that we would be friends forever.

A lot of water has flowed through the Bosphorus since then.

Well? You certainly remember the Mavi Marmara, the Turkish ship used by Humanitarian Relief Foundation (IHH) activists to break the siege of Gaza. Let me remind you that Bülent Yıldırım, the head of the IHH who was on board the Marmara, was interrogated by you for allegedly financing al-Qaeda factions with money donated to the IHH.

But let’s leave all those accounts aside for now. What I wanted to tell you is that unlike many Israelis who have decided to boycott Turkey and stopped visiting your wonderful tourist sites, I continue coming to your country. I love the people, the cities and Turkish food, too. Boureka pastries washed down with a glass of ayran and Adana kebab are some of my favorite foods. And, yes, I must admit that I cannot forget all the support that we Israelis received from Turkey in the past. Actually, I still have friends and acquaintances who apologize for the policies of the government of which you are a member.

That, Mr. Davutoğlu, is because no matter what you and your prime minister say, when push comes to shove, the people are wiser and more understanding than their leaders. They realize that a long-lasting friendship that is based on more than just tourism and business cannot be erased in a day. Yes, the citizens of a country are sometimes wiser than their leaders. By the way, this is true of my country, too.

This letter was written on the eve of the Security Conference meeting in Munich. I can only hope that you did not keep stirring up war. And one more thing: whether you run into Defense Minister Ehud Barak or not, he was prime minister in 1999, and it was in that capacity that he cut the red ribbon, inaugurating the caravan camp that my country put up after the earthquake. So I hope that you thanked him for the caravan camp he dedicated in İzmit. In return, I hope he thanked you for the assistance that Turkey provided to Israel about a year ago to combat the forest fire raging on Mount Carmel.

That could be a good way to start improving our relationship. Without even realizing it, we can go back to being friends, like we were a long time ago.

Shlomi Eldar is a contributing writer for Al-Monitor’s Israel Pulse. For the past two decades, he has covered the Palestinian Authority and especially the Gaza Strip for Israel’s Channels 1 and 10, and has reported on the emergence of Hamas. In 2007, he was awarded the Sokolov Prize, Israel’s most important media award, for this work. He has published two books: Eyeless in Gaza (2005), which anticipated the Hamas victory in the subsequent Palestinian elections, and Getting to Know Hamas (2012). Follow him on Facebook.