Shelly Yachimovich, leader of the Labor Party, declared that she will not join a Likud-led government, in a last-minute attempt to win back her leftist electorate, writes Mazal Mualem. 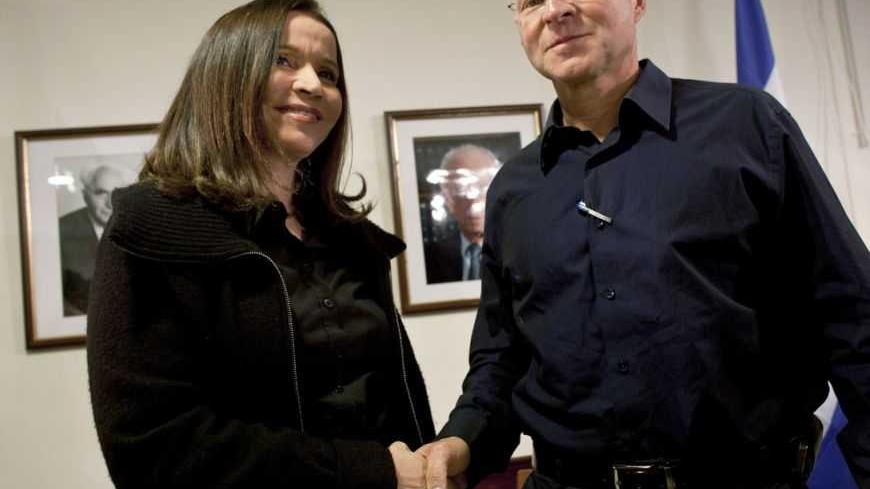 Israel's Labor party leader Shelly Yachimovich (L) shakes hands with Noam Shalit -- the father of Gilad Shalit, a soldier who was held for over five years in Hamas captivity and was released in October 2011 -- after a news conference in Beit Berl, north of Tel Aviv, Jan. 10, 2012. - REUTERS/Nir Elias

For long weeks, [Israeli] Labor party leader Shelly Yachimovich has managed to avoid closing any doors to a post-election coalition agreement with [Prime Minister] Benjamin Netanyahu. She insisted on leaving open the option of joining forces with him even following the alliance forged by Netanyahu and Yisrael Beiteinu leader Avigdor Liberman, which painted the future government the colors of the extreme right just as the election campaign was launched.

And even when, in the past few weeks, Netanyahu turned further to the right, driven by the loss of mandates to Naftali Bennett’s [far-right] HaBayit HaYehudi party [as indicated by the polls], she kept to this strategy of hers. She managed to maintain her right to silence even when the Israeli government set out to build hundreds of housing units in East Jerusalem, antagonizing both Europe and the United States.

She stood firm all along — until last Thursday (Jan. 3). On that day, Yachimovich convened a special press conference and taking the podium, she explicitly announced: “I am not going to join the extreme-right government of Netanyahu and Liberman.” Her words dropped like a bomb on the Israeli political establishment, in particular, and on the Israeli public, in general. It was an admission of failure of an entire [political] conception.

In fact, it is the failure of the most significant socio-political venture undertaken in Israel in recent years. Admirably holding on to her stance, Yachimovich has consistently argued that the agenda of the Israeli public has changed – that it’s the socio-economic issues rather than the political and security issues that preoccupy the Israeli public in the wake of the social justice protest movement [that swept Israel in 2011]. She sought to demonstrate that the election could be won over the social agenda alone or, as she herself put it [alluding to the “cottage cheese protest” — the consumer boycott of the big dairy cartels]: “The price of cottage cheese is of concern to the public at large, whether on the left or on the right of the political map, far more so than the Iranian nuke.”

Having stated only about a month ago, in one of her interviews to the media, that it would be political folly to veto Netanyahu as a potential coalition partner, Yachimovich explained in the press conference that she called last week that the circumstances had changed.

She noted that Naftali Bennett, the leader of HaBayit HaYehudi, was pushing Netanyahu towards the radical right and that Netanyahu was under the sway of the “Feiglins” (the extremist Likud faction whose leader, Moshe Feiglin, was elected to the Likud Knesset list). She argued that, in the light of the new situation, the Labor party had no place in a Netanyahu-led government.

What’s more, following her press conference, Yachimovich has tried to induce the other center and left parties to declare that they too would not join Netanyahu in a post-election government, thus hoping to create a “blocking bloc.” Alas, so far, this endeavor of hers has not been crowned with success either.

One may wonder, indeed, whether the circumstances have really changed, as argued by Yachimovich in an attempt to justify her abrupt about-face.

A review of the political goings-on in the past few weeks shows that nothing new has come to pass all of a sudden – except for the loss of mandates by the Labor party.

Yachimovich too must be well aware that the radicalization of the Likud and Netanyahu are nothing new. It started with the merger between the Likud and Liberman’s Yisrael Beiteinu and continued with the ultra-rightist list of candidates elected by the Likud members for the upcoming parliamentary election, at expense of ministers associated with the so-called “moderate right,” like Benny Begin, Dan Meridor and Michael Eitan, who found themselves in unrealistic spots on the Likud Knesset list.

The meteoric rise of Bennett, who overtook Netanyahu on the right, as well as Netanyahu’s construction spree in the settlements, which immediately followed it as a counter-reaction, are all old news for Yachimovich, who nevertheless kept making flirtatious overtures toward the Likud. (Only three week ago, Yachimovich stated that “pending an arrangement [with the Palestinians], the government should go on allocating budgets to the settlements.”)

It is not on account of all these that Yachimovich has abruptly changed direction and turned left. The real reason behind her change of course is that the strategy she previously employed, that of wooing the right-wing electorate, turned out to be a total failure, as indicated by the public opinion polls of the last month.

The notion that Yachimovich, in her capacity as the Labor party leader, would be able to win over traditionally right-leaning voters if only she disposed of her association with the political left and focused on the social agenda has proven utterly false.

In the last month, the Labor party lost on the average a mandate and a half per week. Yachimovich has realized, even though a bit too late, the plain and painful truth. Not only has she failed in consolidating her power by bringing round the Likud and Shas voters, who were supposed to cross the lines en masse and find a new political home in her party, she has also been losing the Labor party natural electorate – the center to left body of voters. Her own public, Labor’s loyal and habitual supporters, voted with their feet. They made it clear to her that they were no longer ready to put up with her efforts to curry favor with the right wing, while discarding the Rabin heritage.

In a closed meeting convened by Yachimovich before that dramatic press conference, she sought the advice of her faction colleagues and presented to them recent public opinion poll results. The Labor party leader, who up till then had demonstrated unwavering self-confidence and, being sure of her way, rarely consulted them, was evidently under pressure that time around.

However, if Yachimovich hoped for some empathy on the part of her Labor faction colleagues, she was soon disappointed. As a matter of fact, some of the participants in the meeting made it quite difficult for her, warning her that even the 16 mandates the Labor party was expected to garner according to the polls (which but a few weeks earlier had anticipated 22 mandates for the party) were liable to drop at the ballot box to a mere 14 seats or less. They held her responsible for the party decline in the polls, charging that it was the price paid for disregarding political ideals and claiming that she must stop making overtures to the right.

Thus, now that the “left” has become a dirty word of sorts, and not least owing to Yachimovich’s moves in the present election campaign, she has to try and win back the trust of the left wing voters. This same public that abandoned her has eventually forced her to "come back home."

The question is whether she will succeed in bringing back home, to the Labor party, the mandates she has lost.

Yachimovich has often characterized the division between left and right in Israel as “anachronistic.” Until last week, she believed that she could beat the system. She promised to be the social “tie breaker” in the confrontation between the two political blocs.

Her failure shows that in Israel, the vote is still determined by the same old rigid categories of right and left, and that no political acrobatics is likely to ever bring about electoral mobility between the two blocs.

Her failure demonstrates something else – far more essential. It proves that in Israel of 2013 socioeconomic issues are still deemed secondary in importance to the political and security issues. And while Israeli citizens voting for the major parties are troubled by the housing crisis and the high cost of living, they want a strong prime minister who is experienced in the political and security arena.

It thus emerges that as yet, the “cottage cheese protest” cannot triumph over the Iranian threat.