What Was the Israeli Election Really About?

Akiva Eldar breaks down the meaning of Israel's election results and finds both a crisis of leadership and a crisis of faith in democracy. 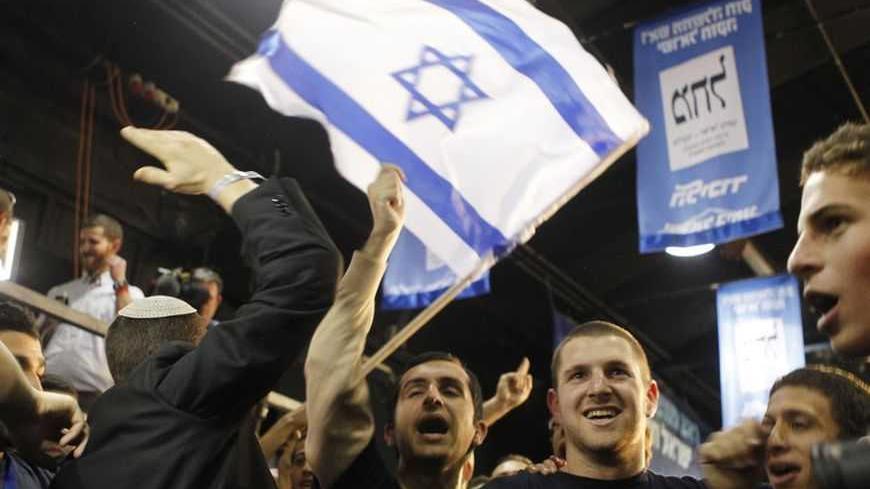 “You’re a big shot,
"Nobody can outdo you,
"Mad about you,
"You’re the greatest of them all!”
(Sarit Hadad sang this to Prime Minister Benjamin Netanyahu at the Likud-Beiteinu campaign launch conference, Dec. 25, 2012.)

Don’t laugh at those words, and don’t discount their importance (Lyrics anonymous, translated by Yossi Gispan, Uzbek folk melody). This carefully selected song reflects the essence of the campaign run by the prime minister and his party, the ruling party. It succinctly summarizes Netanyahu’s and his partner, former Foreign Minister Avigdor Liberman’s (or their American advisor, Arthur Finkelstein’s) response to the question that’s been left hanging: “What in the world was this election about?” To explain this point, it is more interesting to start with the question, “What wasn’t it about.” So, here goes:

It was not about socio-economic issues: The heroic effort of Labor Party leader Shelly Yachimovich to convince the public that the price of cottage cheese was more important than the threat posed by Iran, occupation, construction in East Jerusalem and the like (issues that will be addressed below) proved only very marginally successful. Even her attempt to lure the right and the settlers proved ineffective and, in the end, she was forced to zig-zag left in desperate pursuit of the lost votes from the left that fled from her party. The explanation of the resounding success of the chairman of Yesh Atid, Yair Lapid, cannot be found in his campaign slogan, “Where’s the money?”

Even the sensational revelation of the giant deficit of NIS 39 billion [$10 billion] in the budget and the economic austerity measures that must be taken as a result, and which we will all feel after the elections, did not threaten to push the Likud, headed by Netanyahu, from the top of the Champions League table. Even the implied criticism by Israel Bank Governor Stanley Fischer, the “Mr. Clean” of Israeli public life, of the prime minister’s unfettered fiscal policy did not change the picture.

It was not about political issues: Even the all-important discussion on resolving the Israeli-Palestinian conflict, an issue that is the very essence of the Zionist vision, was cast aside along with the ever-growing rift between Israel and the West. Even the pointed barbs President Barack Obama cast at Netanyahu just last week [Jan. 15] (“Israel doesn’t know what its own best interests are,” “the prime minister is a political coward” — to repeat a few) did not have any impact on the election campaign. Even the colossal diplomatic fiasco that ended with the Palestinian Authority being declared at the UN a “non-member observer state” and the immediately ensuing “appropriate Zionist response” — accelerated construction in East Jerusalem, which angered the entire world — did not interest anyone here in the slightest.

It was not about Iran: You would have expected a “top gun” like Netanyahu to put the nuclear crisis at the forefront of his campaign. It could have been a winning card when played against his opponents’ lack of experience. With all due respect to Shelly Yachimovich, and many Israelis have a great deal of respect for her, they have a hard time imagining her pointing a threatening finger at Tehran and explaining to the world in fluent English just how justified Israel is. But Netanyahu opted not to play that card. Maybe because a serious and in-depth discussion of the matter would have ended with the conclusion that the threat could be resolved in ways other than that suggested by Sarit Hadad’s song. However, as previously stated, the question of whether Israel should attack Iran or let diplomacy and sanctions run their course did not interest the candidates or the voters.

And now we get do the real answer to the question in the headline. What was the election actually about? It would seem that the answer, as superficial as it may sound, is “about who is more of a leader,” or in other words: “Who’s the real top gun.”

The Likud-Beiteinu Party tried to position Netanyahu as a strong and experienced leader. “A strong prime minister, a strong Israel,” was chosen as the lead slogan. It was a variation of the “strong” brand that has been associated with Netanyahu since his 1999 campaign. Then he launched his campaign with, “a strong leader for a strong nation,” which was replaced by “a strong leader for the future of Israel,” after it evoked a chilling association.

One of the deepest insights on “voting for a brand” was provided by George Lakoff of University of California, Berkeley, who analyzed Arnold Schwarzenegger’s campaign in California. Lakoff demonstrated that people frequently vote for values and identities that are often against their best interests. To illustrate the argument, Lakoff used the following example: “Don’t think of an elephant.” As soon as somebody hears this type of request, he cannot help but think of the animal. The “strong leader” brand works much the same way. In this election, we saw a campaign in which much of the public identified with the concept of a “strong leader” and made less of an effort to read his socio-economic or political agenda.

Netanyahu and Liberman wanted to impress the voters with their leadership and to stand next to the winners, but even if the unified front did not maintain their strength, it ensured their position to be invited, as the largest party, to build a coalition, because they were at the top of the Champions League table by a significant margin over the other teams. That is the power of branding — it follows you everywhere. Knowing the mentality of their flock, they know that Israelis do not like “being suckered” and gambling on losers or on people branded that way. On this scene, where the name of the game is who is a bigger leader, stronger, stands firmer — even to the president of the United States, the other political parties did not have a fighting chance to win. As outgoing Minister of Welfare and Social Services Moshe Kahlon said, “With Bibi, I’ll sleep better at night.”

That said, Netanyahu and his advisors did not take into account the new brands that took the political market by storm: One of them is Naftali Bennett, who offered the public an upgraded Netanyahu, an iPhone 5 instead of 4. He’s strong on the right, a graduate of the General Staff Reconnaissance Unit, a high-tech entrepreneur, a fluent English speaker and, what’s more, he’s also Orthodox, but not a religious extremist. Everybody’s “brother.” The refreshing new all-Israeli. To be sure, Bennett got his tailwind from the original big shot and put his picture on billboards behind Netanyahu’s shoulder, with the caption, “strong leadership.” After all, we’re all brothers, right?

The second brand that burst onto the centrist scene is Yair Lapid. A few years ago, the “Lapid” brand, in the form of his late father Tommy, sprung out of the Popolitika political talk show studio and surprised us when his party, Shinui, captured 15 seats. This time, the “Lapid” brand, in the form of the son, came from the Friday evening interview show. While listening to the radio, I heard a young woman who seemed quite intelligent, saying that she was deliberating between Bennett and Lapid. In other words, between the Greater Israel party, which includes Orit Struck, one of the greatest zealots of the Jewish settlement in Hebron, and the party with top players such as Yael German, who was elected as mayor of Herzliya representing left-wing Meretz. Put differently, she is deliberating between two big shots. Like most of the electorate, this young woman was not aware of the platforms espoused by the parties or their ideology. She only knew the branding of the people heading them, and based on that alone, yesterday she gave them the mandate to determine her fate in the coming years.

Hidden behind all of this is a major crisis: a crisis of leadership, a crisis of faith in democracy. A large part of the Israeli public believes that “all politicians are the same,” that none of them truly represents real values aside from themselves, and regardless absolutely nothing will change this morning.

Akiva Eldar is a contributing writer for Al-Monitor’s Israel Pulse. He was formerly a senior columnist and editorial writer for Haaretz and also served as the Hebrew daily’s U.S. bureau chief and diplomatic correspondent. His most recent book (with Idith Zertal), Lords of the Land, on the Jewish settlements, was on the best-seller list in Israel and has been translated into English, German and Arabic. In 2006, the Financial Times named him among the world’s most influential commentators.  He received the annual “Search for Common Ground” award for Middle East journalism and the Peace through Media Award of the International Council for Press and Broadcasting. Eldar was born in Haifa, Israel, in 1945 and graduated from Hebrew University of Jerusalem, where he majored in economics, political science and psychology.