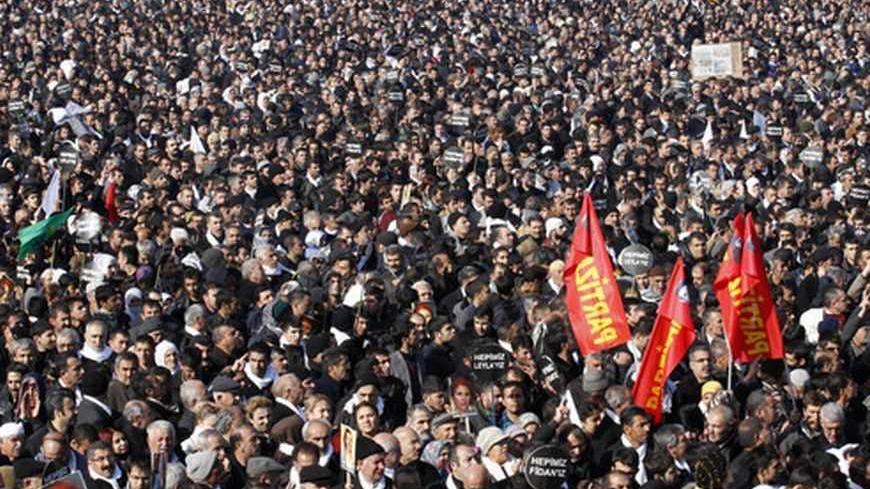 It has become evident once again that Turkey’s efforts to find a solution to its Kurdish issue through negotiations or to its consequence, “the terror question,’’ will be confronted by serious psychological and political resistance stemming from republican Turkish identity.

Last Thursday, Jan. 25, the Turkish parliament debated draft legislation enabling defendants who don’t speak adequate Turkish to make their court defenses in their mother tongues. A legal defense in Kurdish is one of the rights demanded by the Kurdish political movement, and was among the demands of Kurdish prisoners to end their indefinite hunger strike, wich ultimately lasted 67 days. At the end, the draft bill that would could mitigate the sentiments of Kurdish victimhood was enacted by the parliament, but the debate in the parliament brought to the fore another issue: the Turkish question.

Member of parliament from the main opposition party Mrs. Birgul Ayman Guler’s remarks from the rostrum became a major controversy.

Guler, a member of the Republican Peoples’ Party (CHP), said, “You cannot fool me with Kurdish nationalism by labeling it progressivism and independence. You cannot equate Turkish nation with Kurdish nationality. There is no Kurdish issue in Turkey. You created a Turkish issue in Turkey. From now on, we are on the defensive; from now on, we will be struggling for the right of legitimate defense.”

The words of the CHP parliamentarian were simply sensational. They were clearest articulation to date of what is called by the Turkish public “”the Turkish question," one of political psychology.

The Turkish public first encountered the concept of the “Turkish issue” during the Justice and Development Party (AKP)’s failed “opening to Kurds” initiative of 2009.

Turkish issue has emerged as a outward expression of the “psychosis of defeat”” of the republican, secular and urbanized Turkish middle classes in front of the neo-Islamic AKP rule and the Kurdish movement, which they see as the antitheses of their values.

The AKP has won every round of its struggle against the “military and bureaucratic tutelage regime” launched in 2007. As a result of the Sledgehammer and Ergenekon operations and trials, hundreds of officers, including many generals and admirals, were detained on charges of plotting coups and prosecuted. The Turkish military that carried out three direct coups in 1960, 1971 and 1980 and an indirect one in 1997 was forced pull back to a position from which it could not intervene in politics.

The military-tutelage regime collapsed. That is when the large secular and republican segments of the population that had seen the tutelage-oriented military as a defender of secularism against Islamic movements began to feel defeated and exposed.

AKP rule additionally imposed full control over an entire array of state institutions, the judiciary and universities. The new Anatolian bourgeoisie that played the key role in bringing the AKP to power significantly increased their share of the economic growth.

At the moment, Turkish politics are far from offering an alternative to the AKP.

Religious conservatives and Kurds who refuse to become Turkish were two key forces against a secular national philosophy for the Turkish Republic. No wonder that those who already feel defeated and sidelined are even more irritated when they see the political representatives of these two groups working together by totally ignoring the secular nationalists. This was at the core of CHP parliamentarian Guler’s angry outburst at the parliament,

Guler’s remarks conceal the root cause of why the constituency she represents does not want a political solution to Turkey’s Kurdish issue.

But equal status in the constitution or a constitution cleansed of Turkishness is one of the conditions of the Kurdish movement for a political solution.

The current constitution of Turkey emphasizes Turkishness. The foundation of Turkey’s Kurdish issue is the Turkish question, and at its base is the rejection of equality.

This was the first time in recent history of Turkey that such a rejectionist attitude was openly pronounced.

The CHP parliamentarian held a press conference last Monday, Jan. 28, to say that the "Turkish nation" she spoke of meant Turkey’s superior identity and that by "Kurdish nationality’’ she meant an ethnic group. But that didn’t change the conclusion Guler had defended: the unequal status quo that gave rise to the Kurdish issue in the first place.

The debate of recent days in Turkey has clearly enunciated the following:

But it is doubtful whether the AKP leadership, which has made the polarization between the secularists and the religious a tool of their policies, understands this reality.