Tulin Daloglu reports on how, beneath the rhetoric of Turkey's hard line on Syria, there are signs that Ankara might be willing to call on Syria's opposition to show greater flexibility in dealing with the Syrian government. 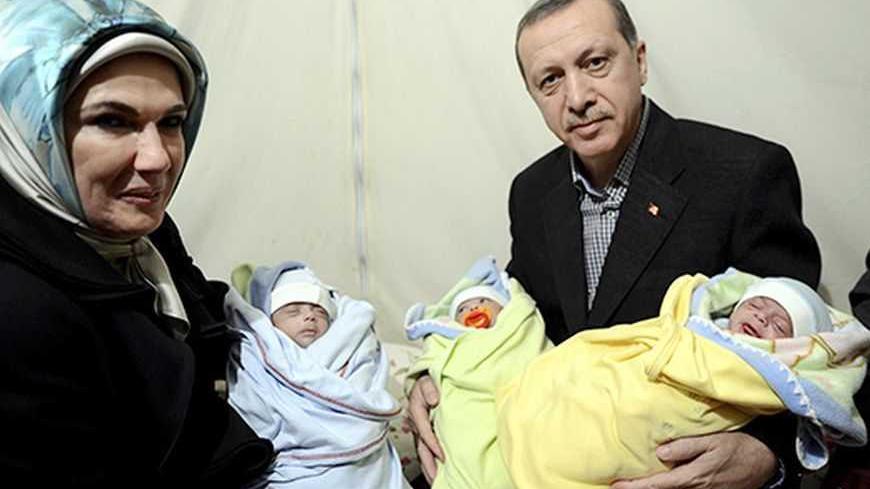 Friedrich Nietzsche said that we can only think those thoughts for which we have words. Sometimes we have words, but we do not have satisfactory explanations as to why things happen. Often, real understanding eludes us.

This is true of Turkish Prime Minister Recep Tayyip Erdogan’s unwaveringly tough rhetoric on Syrian regime. It neither helps to end the bloodshed in the country, nor is there a real threat of a Turkish military incursion into Syria. But the question remains as to how Turkey will continue to strike a balance without falling into Assad’s quagmire as Ankara intimately engages with it.

“If those [who] came from thousands, ten thousand kilometers can justify their invasion of Iraq, we can’t sit in the stands watching the events in Syria with which we share a 910 kilometer border. Whatever is necessary, we must do that and we can,” Erdogan said in Gaziantep on Jan. 19. “Syria is as important as our domestic affairs.”

In Syria, innocence is long gone. The country is a crime zone. With the atrocities executed by the opposition, chances died for a decent revolution bringing down the Assad regime, and now neither side can claim the upper moral hand. Humanity is put to shame there.

Turkey’s Syria policy involved calculating a foreign military intervention. Although the Erdogan government is adamant that it alone bears the burden of more than 155,000 Syrians staying in border camps in Turkey, and that NATO member countries grant its request for Patriot interceptor missiles, the unpredictable timeline for Assad’s departure increases the risks for Turkey.

“Foreign intervention will have disastrous consequences for the region,” said Valeriy Gerasimov, chief of the Russian General Staff, on Jan. 16, just as the Russian military wrapped up its biggest naval exercises in the Mediterranean. “Our partners are telling us that these air defense systems will not be used to create any no-fly zones over Syrian territory… Any accumulation of arms, especially in crisis areas, creates additional risks.”

While Ahmet Davutoglu, Turkey's foreign minister, claimed on Jan. 19 that “Assad’s days in power are numbered,” his statement remains wishful thinking until Assad is gone. And even if Assad’s era comes to an end, that doesn't guarantee an end to the bloodshed.

In that context, last week's visit to Washington by Feridun Sinirlioglu, undersecretary in the Turkish Foreign Ministry, has attracted attention. Informed sources in the Ankara beltway say that two issues need to be separated in discussing Turkey’s Syria approach. “Erdogan has to continue the tough talk on Syria because the catastrophe goes on there, but Sinirlioglu was trying to figure out a way both saving Erdogan’s face for its tough tone [on] engagement, and sorting out a deal between the Assad regime and the opposition."

As the Arab League and the Syrian opposition flatly rejected Assad’s Jan. 6 proposal, which included a ceasefire followed by a comprehensive national dialogue conference and a new broad-based government and parliament, Erdogan didn't shy from dismissing it right away.

“Assad could not be considered democratic — killing his own people with bombs and jets,” Erdogan said on Jan. 7. “Fifty thousand Syrians have been killed due to state terror in Syria. Around 600,000 Syrians had to leave Syria. Two and a half million in Syria have left their homes. Who could trust Assad and return home? Who would believe Assad’s remarks on democracy? Over 100 countries in the world have recognized the Syrian National Council. I wonder how many countries remain that recognize Assad.”

The political whispers in the Ankara beltway suggest that if there can be clear assurances and if Assad shows flexibility on holding power, the Erdogan government can help to facilitate a dialogue with the Syrian opposition to reconsider their position as well. And that is a clear sign that Turkey's stand on Syria is showing signs of a "shift."

But until there is clear action, there is no reason to be hopeful about an end to the Syrian exodus.