Is Turkey Digging a Hole With Its Syria policy? 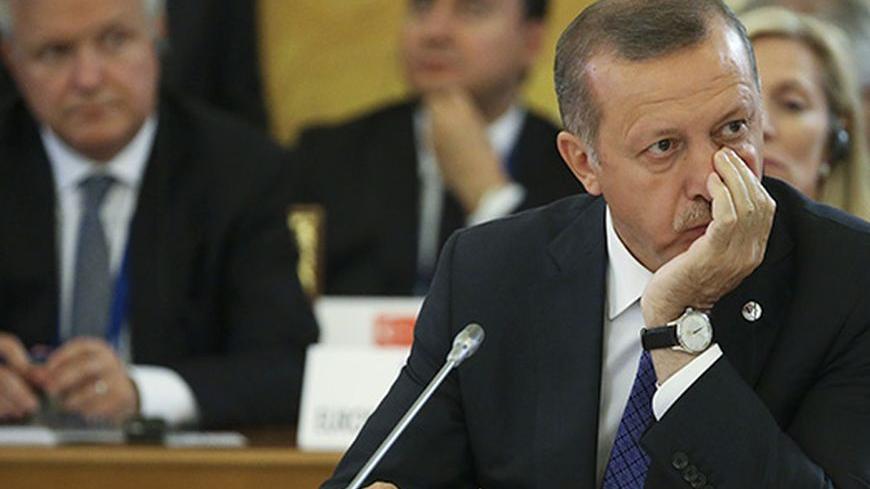 What happens when you make a mistake? You either admit it’s a mistake and do your best to exit the situation as quickly as possible, or you deny it and continue digging yourself in a hole by repeating the same mistake, making the situation more complicated. It is no different when states make a mistake, or their policies become one.

Turkey’s Syria policy has been a mistake, and Turkish Prime Minister Recep Tayyip Erdogan’s government continues to deny this reality — especially when he comes under criticism for turning a blind eye to radical jihadist groups entering Syria through Turkey. People are likely to pay a dear price for this.

As the international media probe deeper into the workings of Turkey’s border with Syria, Turkish Foreign Minister Ahmet Davutoglu has been on the defensive. As the architect of the country’s new foreign policy, Davutoglu flatly denies any suggestion that Turkey has any relation to these extremist groups. “Groundless reports that have been published in international media concerning our Syria policy have no credence,” he wrote in August in a brief answer to the question of Hasip Kaplan, a pro-Kurdish Peace and Democracy Party (BDP) deputy.

Kaplan wondered whether Turkey was using these jihadists as proxies to curb Syrian Kurds' taking control of Syrian territory bordering Turkey, which is historically named Rojava. “Turkey’s Syria policy is based on a peaceful footing in line with the principle of supporting the Syrian people’s legitimate demands,” Davutoglu said.

The Wall Street Journal upped the ante and turned the spotlight on the role of Turkey’s spy chief Hakan Fidan in its detailed Oct. 10 article. “Turkey’s Syria approach, carried out by Mr. Fidan, has put it at odds with the US. Both countries want Mr. Assad gone. But Turkish officials have told the Americans they see an aggressive international arming effort as the best way,” it wrote. “The cautious US approach reflects the priority it places on ensuring that arms don’t go to the jihadi groups that many US officials see as a bigger threat to American interests than Mr. Assad.”

The article added: “In recent months, as radical Islamists expanded into northern Syria along the Turkish border, Turkish officials have begun to recalibrate their policy — concerned not about US complaints but about the threat to Turkey’s security, say US and Turkish officials.”

It surely is an improbable thought that Turkey could have favored al-Qaeda-affiliated groups like Jabhat al-Nusra, Ahrar al-Sham and the Islamic State of Iraq and al-Sham (ISIS) in the Syrian theater, thinking that they are the most dominant and effective forces fighting against Syrian dictator Bashar al-Assad. After all, Turkey is not a stranger to al-Qaeda violence.

Those in favor of Justice and Development Party (AKP) policy toward Syria today could conclude that it makes no difference whether the government indirectly supports these groups or not because the country could come under al-Qaeda attack anytime, and that the political and strategic dynamics were quite different a decade ago. They may have a point. Turkey — as a NATO ally, strategic partner of the United States and EU member candidate — is prone to be the target of jihadist groups. But it becomes a whole different game when Turkey turns the other way when these jihadists come into Turkish territory to cross the border into Syria to fight Assad. These groups don’t talk about bringing democracy to Syria, but establishing an Islamic state. The Erdogan government could argue that extremists can’t survive in Syria after Assad’s departure, but would you go to the bank to cash this guarantee based upon the Turkish government’s  record in Syria?

That aside, one needs to question what the Erdogan government was thinking in the first place when it believed they could have benefited from these groups bringing Assad down. If these radical Islamist groups do it their way, why do the Turkish authorities not ask the following question: Will that end with Assad? Could they target Erdogan next?

The Turkish prime minister is the face of political Islam, proving that he can transform a society into becoming more Islamic without implementing Sharia. And that is not acceptable to these jihadist groups. They want full-force Sharia and to re-establish the caliphate. Put simply, Erdogan is also their enemy. And for a country with a majority Muslim population, this government should have known better than to get into any kind of dance with these groups and permit the misperception that Turkey has given concessions to them in an attempt to end the Assad regime.

Turkey failed to understand how it placed itself in such a difficult position by being carried away with the conviction that Assad has to go.

It must have been the intelligence reports that shaped Erdogan’s decision at the beginning to throw his full, unmitigated support behind the Syrian opposition, assuming that Assad would be brought down in less than six months or a year. Turkey’s intelligence community not only failed to get the domestic dynamics in Syria right, it also misread the international community’s strategic calculus for engaging in a military showdown to push for Assad’s departure.

Davutoglu also failed to understand that Assad is not a democratically elected leader, but an outright dictator who never had a clean human rights record, even when Erdogan considered him as close as his “brother.” The Erdogan-Davutoglu team often argues that they did all they could before breaking Turkey’s political and diplomatic ties with Syria in September 2011, after urging Assad to implement democratic reforms.

With all due respect and sincerity, did the Erdogan government really believe that Assad could have done that? How did you think a dictator would react when you give him instructions and bluntly demonstrate your superiority over him?

Turkey should have known that when it started to allow free passage of arms and weapons to the Syrian opposition that it also actually wrote a check to the regime to respond with force.

It is problematic that the Erdogan government continues to believe its Syria policy is flawless. Davutoglu claimed yesterday, Oct. 15, for example, that Turkey has supported a peaceful solution to the Syrian crisis: “We have expressed our support from the beginning for the Geneva II talks because Turkey has been engaged in all sorts of efforts in bringing a peaceful end to the Syrian crisis as soon as possible.”

Davutoglu continued: “But what prevents this outcome is the Syrian regime’s duality. While it expresses willingness to participate in these talks, it uses chemical weapons against people on the other hand and all sorts of other weapons killing the people.”

And the Erdogan-Davutoglu team still seems to believe that the most important thing to accomplish in Syria is the end of Assad. Then what? Could Syria remain a united country? Who would unite these people after such a traumatic experience? Claiming that Turkey has no responsibility in today’s mess in Syria would be to admit that it is quite irrelevant in the region — and that would be wrong as well. But it seems the AKP government also sees the possibility of a Syrian fracture the day after Assad is gone. That is why it extended the parliamentary authorization for another year to allow the government full authority to decide on sending troops to Syria.

Today, it’s the Syrian Kurds fighting al-Qaeda militants for their survival. But thanks to Ankara’s misjudgments and miscalculations, tomorrow, it may very well be the Turkish military, and the country may again experience those chilling attacks that occurred in Istanbul a decade ago. The AKP government’s Syria policy made Turkey less safe, regardless of the complex border situation. And this is all without talking about how they play their cards in efforts to solve the Kurdish issue.

by Murielle KASPRZAK and Joseph SCHMID | AFP | May 26, 2022
END_OF_DOCUMENT_TOKEN_TO_BE_REPLACED