Who Is Behind Paris PKK Murders?

Kadri Gursel speculates on whether the murders of three PKK activists in Paris might be linked to the recent peace initiative between Ankara and the PKK, and the "regionalization" of the Kurdish issue in Turkey, Syria and Iraq. 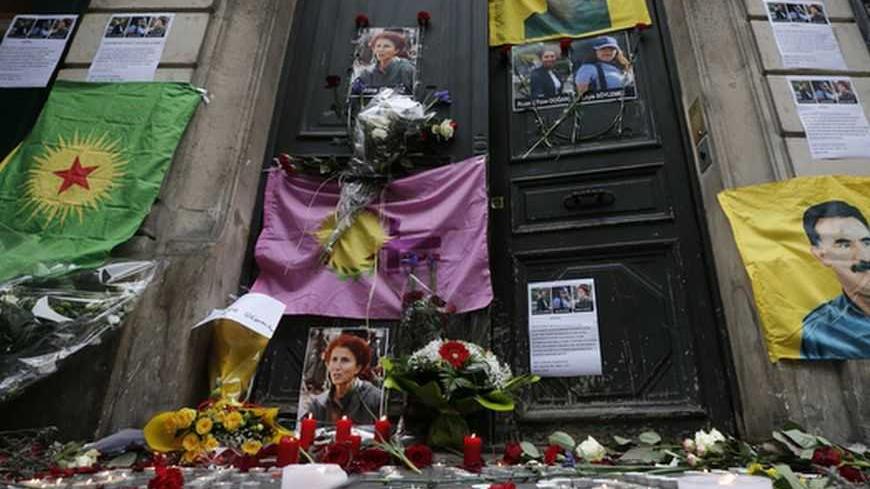 Flags, flowers and candles displayed by members of the Kurdish community are seen in front of the entrance of the Information Center of Kurdistan in Paris, where three Kurdish women were found shot dead, Jan. 11, 2013. - REUTERS/Christian Hartmann
January 11, 2013

What do the corpses of three Kurdish women activists of the PKK found killed with silenced weapons at the Kurdish Information Center of Paris in the early hours of Jan. 10 tell us?

The keys to an answer are actually in the question above. The identities of the victims reveal important points. Sakine Cansiz, said to be above 55 years of age, was an important figure inside the PKK. She was among the core that founded the PKK with Abdullah Ocalan. As such, she had a substantial and emblematic position in the history of the Kurdish movement. We are told that she spent 10 years in the Diyarbakir Prison, notorious for torture and ill treatment of Kurdish prisoners, following the 1980 military coup and that she had become one of the symbols of resistance in prison. Sakine Cansiz was a prominent name among politicized Kurdish women. With all her particulars and background, she won’t be simply forgotten by Kurdish nationalists.

The second person killed, Fidan Dogan, 31, was the representative in France of the National Kurdistan Congress, which also made her a valuable target. The third victim was a younger woman, activist Leyla Soylemez, 24.

Comments by French President Francois Hollande, carried by the Turkish press, offer clues on the extent of the political activities of the victims: “This disastrous incident has directly affected three persons, one of whom I knew personally, as she was meeting with us regularly. Many politicians and I knew her.”

The murder of these persons is a heavy trauma for the Kurdish movement in Turkey and Kurdish public opinion. Adverse consequences should be expected.

The timing of the murders also offers significant clues. The murders took place at a time of preliminary contacts between Turkish state officials and the PKK’s founding leader Abdullah Ocalan, who is serving a life senence in prison. The Turkish side had described these talks as intending to persuade the PKK give up its arms.

Many observers, including the spokesmen for the Kurdish movement, believe that these contacts with Ocalan at a special prison on the Imrali Island in the Sea of Marmara have not yet been elevated to a systematic peace-negotiations process seeking to end the Kurdish issue between the Turkish government and the PKK. But there was hope that such a process could start soon.

That is why the Paris murders serve the interests of actors who would like to destroy the process even before it starts. And there are powerful actors who don’t want Turkey to reconcile with its own Kurds for the time being and whose interests could be harmed by such a peace.

The technique of the murders speaks volumes as well. Only professionals can commit perfect murders. The office door had coded entry system, but it was opened without force. This tells us that the victims probably knew the killers, or the killers want us to think that. The near consensus in Turkey is that the killers wanted to destroy a peace process.

If it is a conspiracy against peace, and it is, then we have to look for answers to two questions:

Who would want to block peace?

And who among them would have adequate intelligence and operational capability to carry out such a perfect murder in Paris?

Let’s start with the “Turkish-agents” hypothesis, the immediate "usual suspect" of Kurdish public opinion in Turkey and in the Diaspora. For the culprites to be agents working for the Turkish government is a most absurd allegation. Why would a government that wants the PKK to give up arms want to block the process with its invisible hands? And why would it endanger its very valuable Turkish-French relations by committing murders on French soil? Unless they are totally moronic, this is unthinkable.

There is also suspicion of a "deep Turkish state," which also out of place. In the Turkish political lexicon, the "deep state" is an illegal, unaccountable phenomenon that uses state facilities and commits crimes for the so-called "high interests" of the state.

We knew that Turkey’s former military/bureaucratic tutelage regime was opposed to a political settlement of the Kurdish issue. The "deep state’" was an adjunct of this regime. The AKP rule eliminated this tutelage regime and all the institutions that the "deep state" relied on either came under government control or were eradicated.

Therefore, the probability of the provocation in Paris to be organized by the remnants of the Turkish "deep state" is close to nil. If they had any potency, they would have used it for provocations on Turkish soil.

As to the assumption that "Turkish nationalists" could have committed the murder, this is also without foundation. They have neither the background nor the operational capability for such actions abroad. If they really meant to do it, it would have been much easier for them to stage such provocations in Turkey.

The final analysis was by Turkish government officials, who said the Paris murders could be an "internal PKK account settling." Even if the ones who pulled the triggers may have been people known to the victims, we can’t ignore the element of timing, which could not be distinguished from the Ocalan-Turkish government contacts.

It would be naïve not to understand that those who planned the murders sought to raise questions about the Ocalan-government contacts, to instill atmosphere of distrust and finally erase the hopes for peace.

It is impossible to ignore such a spectacular crime in one of the important centers of the world just as peace was coming onto the agenda.

If they had done something similar in the mountains of Turkey, it would have been ignored, but not in Paris. That Paris was the scene of the crime also tells us things. The possibility that the killers were PKK militants just like the victims could not be treated separately from the regionalization of Turkey’s Kurdish issue. The Syrian crisis led to regionalization of Turkey’s Kurdish issues, and Ankara’s Syria policy made potential results much more menacing for Turkey. You can no longer ignore the involvements of Iran, Baghdad, Erbil, Damascus and Syrian Kurds as parties to the Kurdish issue.

It is not a secret that among these actors there may be those who want a solution to Turkey’s Kurdish issue even less than the Kurdish hawks, and who want to maintain this issue as an instrument that could be used against Turkey when needed.

It must never be forgotten that among the powers who may want to block progress on a negotiation process may have their own extensions inside the PKK.