Adnan Abu Amer examines Israel's attitudes and policies toward the Palestinian Authority, and its interest in keeping the PA weakened but alive. 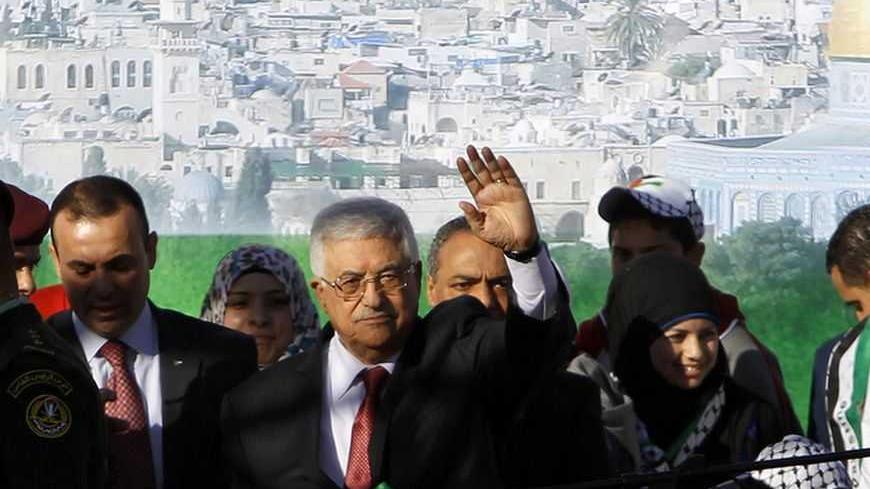 While stalemate dominates the Palestinian political scene on multiple levels, big questions have begun to arise regarding the future of the Palestinian Authority (PA). The prospect of the authority’s collapse or dissolution has sparked heated debates amongst Palestinians and Israelis, as President Mahmoud Abbas recently threatened to relinquish control to Israel.

As collapse and dissolution loom on the horizon, the dimensions of this crisis should be analyzed from two crucial angles:

Internally, despite rumors claiming otherwise, there is no light at the end of the tunnel for national reconciliation. In addition, economic and financial issues foretell dire implications for tens of thousands of employees. And externally, while the current and upcoming Israeli government intends to impose solutions on all sides, regional and international focus has become centered on more urgent matters while the Palestinian issue is swept under the carpet until further notice.

In the midst of these conditions, the many political and intellectual philosophies adopted by a large segment of Palestinian politicians trying to come up with a temporary fix for current problems seems out of place. The crisis is becoming increasingly more urgent as the deteriorating authority encumbers the Palestinian cause and disperses the Palestinian people. Once thought to be the most likely solution to the Palestinian issue and conflict with Israel, the PA has been turned into a lucrative personal investment project for some, serving personal issues in a way it has never been able to serve the greater cause.

The fact of the matter is that the PA has placed political and financial burdens upon the Palestinians, while sparing Israel from being brought to justice. This in turn has made the occupation incredibly easy for Israel. The Palestinians exist under occupation and are thus not supposed to come up with solutions for their captors lest they be seen as the cause of the problem by outside observers.

This debate has proven more crucial as the power of the PA dwindles. The central authority is completely absent, the rift between the West Bank and the Gaza strip runs deeper than ever, internal tensions have become  heated, and the financial crisis is casting its toll. Given all of these factors, it is crucial that questions be asked regarding the stability and viability of the authority.

A close, objective analysis of the PA’s future demands a look back at the course of its work since its establishment 18 years ago. Two phases must be examined:

Fatah’s rule from 1994 until 2006, as characterized by a purely managerial style: The authority exhausted itself in a series of negotiations. Therefore, instead of acting as a means of realizing dreams of an independent state, it became an end for a large part of its leadership. As a result, it transformed over the years into a “project,”  “bargain,” a “monopoly” and other terms that describe the direct relationship between money and power.

Second, Hamas rule from 2006 until 2013, as characterized by mismanagement: The authority became mired in the denial, economic blockade and military conflict. These challenging years represented the most difficult and complicated period of time for Hamas.

Throughout both periods of time, Israel was a mere spectator, looking on as if what transpired had been predetermined by strategy and policy experts decades ago. The 18-year-rule was characterized by two issues that are worth examining:

First, inherent weakness within the authority and leading factions of Fatah and the Palestine Liberation Organization (PLO), in spite of support from Israel and the international community; and, second, Islamic empowerment, headed by Hamas.

Few will disagree that the period leading up to the Second Intifada constituted a golden era in Israel in terms of security and military clout where Israeli and Palestinian security agencies worked together. The Palestinians were rudely awoken less than a decade later by an authority that had been overrun, whose presidency served only to dole out salaries.

The terms “government,” “power,” “Parliament” and “ministries” hold no meaning in the land, sea and air blockade over the West Bank and Gaza, where the Palestinians continue to struggle for liberation. Hence, some Palestinian political parties suggest the establishment of a local administration for living conditions —similar to a municipal council — that looks into and governs the daily affairs of the people, and communicates with donors and international organizations.

The paradox in this situation is that the mere existence of the PA has become of interest to Israel, the Arab world and the international community. None of these factions see any reason for the dissolution of the authority, particularly for the following reasons:

1. Israel considers the authority to be its partner with which it cooperates on the security level;

2. The international community recognizes and supports it, and seems deeply invested in reconstructing civil and security institutions;

3. The official Arab regime swears by the importance of this authority as it tries to spare itself the blame for the decay of the Palestinian cause.

The core reason the PA remains, despite deterioration and regression, is political. The authority gives the world the distorted impression that the establishment of a Palestinian state is on the go. However, the data of the upcoming Israeli elections indicate that this authority will face an unprecedented extreme right-wing government, which could make the role of the authority obsolete as punishment for addressing the United Nations on the one hand and the failure of the government to come up with any sort of negotiation plans on the other.

In Israel, a heated debate is raging about the future of the PA in two principal regards:

Politically, as represented by the government and political parties: Palestinians are seen as not worthy of a governing body, largely due to the way the Hamas movement in Gaza has distorted their image. Additionally, both Palestinian parties are nearing national reconciliation while Mahmoud Abbas is being smeared as the other face of Khaled Meshaal.

Second, as regards Israel's military and security concerns: Cost benefit analyses favor the authority. It must remain, not necessarily for the sake of Palestinians, but because its dissolution and the burden of its collapse are too costly for Israel.

Financially, Israel cannot afford the economic and living costs burdens of about 4 million Palestinians. Israel will be asked, in accordance with international law, to meet the needs of this population, a burden it has evaded when it established the authority in 1994. Also, the Israeli security agency Shabak is tremendously glad to witness a relative calm in the West Bank as a result of security and intelligence cooperation with the PA. Its collapse would force the Israeli army to restructure central command, strengthen military forces, deploy military units and intensify operations.

Many Israeli military officials have announced that Israel has no interest in re-occupying the West Bank and the Gaza strip or in dissolving the Palestinian Authority. However, the Israelis are tightening their grip on Palestinians inside within the wall of apartheid, which threatens to spark a new conflict.

Israel is well aware of the power that can be wielded by the PA, thus pressure on it will remain consistent in the near future. The authority will continue to teeter on the edge amid the absence of a serious political course that leaves it “politically paralyzed.” A meticulous examination of Israeli behavior portends future financial and procedural sanctions. The movement of the authority’s officials will be restricted and some concessions will be denied while taking care to avoid dissolution or collapse.

As a result, the PA will remain “on life support” as Israel carefully applies its philosophy of keeping the authority “neither dead nor alive.”

Adnan Abu Amer is Dean of the Faculty of Arts, and head of the Press and Information Section as well as a lecturer in the history of the Palestinian issue, national security, political science and Islamic civilization at Al Ummah University Open Education. He holds a Ph.D. in political history from the Demashq University. He has published a number of books on issues related to the contemporary history of the Palestinian cause and the Arab-Israeli conflict. Follow him on twitter @adnanabuamer1.