Lebanese Minister of Youth and Sports Faisal Karami survived an attack on his convoy by Salafist protesters on Jan. 18 in the northern city of Tripoli, reports Jean Aziz. 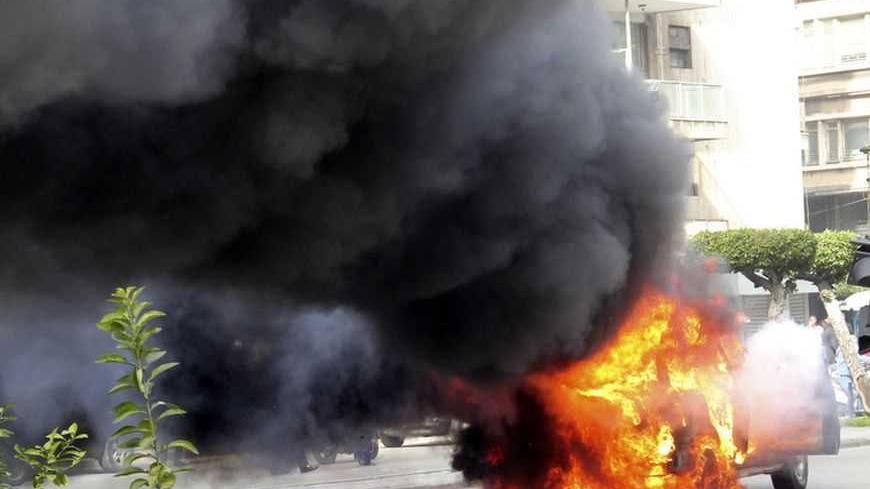 A burning car, part of Lebanese Minister of Sports and Youth Faisal Karami's convoy, burns after an ambush in the northern Lebanon city of Tripoli, Jan. 18, 2013. - REUTERS/Stringer

On Friday afternoon [Jan. 18], the city of Tripoli witnessed a security incident that is the first of its kind in Lebanon since the Lebanese Civil War ended in 1990.

Sunni Salafist groups were demonstrating at a square in Lebanon’s second largest city — after the capital, Beirut — to demand the release of their comrades who have been sitting in Lebanese prisons since 2007. These members were arrested for being involved in a violent battle that happened between May 20 and Sept. 5, 2007 at a Palestinian refugee camp located near Tripoli, known as the Nahr al-Bared camp. The battle was between the Lebanese army and a fundamentalist al-Qaeda-affiliated jihadist group, known as Fatah al-Islam.

While the fundamentalists were demonstrating this afternoon, a four-car convoy transporting Lebanese Youth and Sports Minister Faisal Karami arrived at the scene. Karami is from the city of Tripoli and the son of Omar Karami, who twice served as Lebanese prime minister (from December 1990 till May 1992 and from October 2004 to April 2005). The minister’s convoy tried to pass through the square where the demonstration was taking place but dozens of armed Salafists cut off the road. There was an altercation between the minister’s bodyguards and the Salafists, and they exchanged gunfire.

Meanwhile, a number of gunmen belonging to a jihadist leader in the city, Sheikh Hossam Abdullah al-Sabbagh, gathered, and they immediately realized that Karami was in the convoy. Because the Salafists outnumbered Karami’s bodyguards, the latter tried to pull back and get away from the square. But Sabbagh’s gunmen pursued them in the streets of Tripoli and managed to launch a rocket-propelled grenade at one of the minister’s cars in the convoy. The car was burned to the ground and four bodyguards were wounded. Then the Salafists tried but failed to blow up the other cars, one of which was carrying the minister.

It should be noted that Lebanese media considers the city of Tripoli a stronghold of Lebanese and Syrian Salafist- jihadists who use the city as a resting place in their fight inside Syria against the regime. Some in Lebanon say that these jihadists are being protected by Lebanese political, religious and even official parties.

This is the first time that the city has witnessed a midday assassination attempt against a minister by perpetrators who did not cover their faces. As of this writing, the government has been unable to arrest any of them.

It should also be noted that Karami, who survived the incident on Friday afternoon, is also the nephew of former Lebanese Prime Minister Rashid Karami, who was killed in an explosion while being transported by helicopter from Tripoli to Beirut on June 1, 1987.

In 1996, the Lebanese Judicial Council, which is a special court specializing in major crimes, sentenced the current head of the Lebanese Forces Party Samir Geagea to life after finding him guilty of assassinating Karami. As a result of that and other charges, Geagea spent 11 years in jail before he was pardoned and released in 2005.