Excerpts of speeches from jihadist Sheikh Feiz Mohammad were allegedly found on the YouTube account of one of the Boston Marathon bombers, Jean Aziz reports. 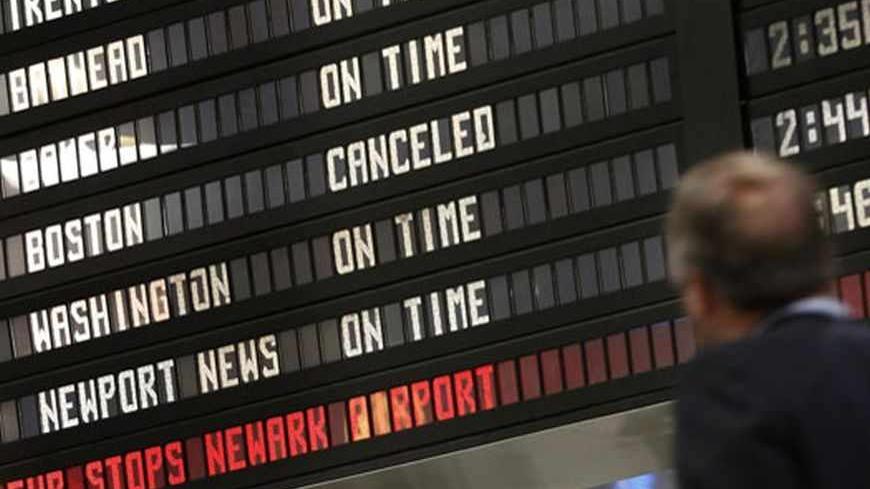 The train schedule board shows train service to Boston canceled at New York's Penn Station during the hunt for Dzhokar Tsarnaev, one of the two Boston Marathon bombers, April 19, 2013. - REUTERS/Brendan McDermid

"A Lebanese brainwashed the perpetrators of the Boston bombings." … "A Lebanese bombed the Boston Marathon via YouTube." … "Sheikh Fayez bombs Boston from Australia." These are some of the headlines published by Lebanese and Arab news sites after it was discovered that excerpts of speeches from a Sunni jihadist preacher of Lebanese-Australian origin were found on the YouTube account belonging to Tamerlan Tsarnaev, one of the two suspects in last Monday's [April 15] Boston Marathon bombing.

According to these excerpts, this jihadist sheikh is named Feiz Mohammad. Preliminary information indicates that Mohammad was born in Sydney, Australia, in 1975, and is the son of two Lebanese citizens who emigrated from Dinniyeh, an area located near Tripoli in Northern Lebanon.

According to unconfirmed press reports, Mohammad was forced to leave Sydney in 2005, and returned to his parent's hometown in Dinniyeh. This came after Australian authorities grew annoyed by the sheikh, given his inflammatory fatwas and statements, which they considered to be inciting collective violence and hatred.

It is worth noting that, since 1999, the area of Dinniyeh has suffered from many disturbances and security tensions as a result of jihadist terrorist groups that have penetrated its rugged mountain terrain. They have created training camps and safe havens, which they use to move about in order to carry out terrorist operations.

Previous Al-Monitor articles have mentioned this jihadist stronghold and references the attacks carried out by Sunni jihadists against the Lebanese army on the night of Dec. 31, 1999, in this same area. There were also fierce battles fought by the Lebanese army in Dinniyeh and in the nearby Nahr al-Bared Palestinian refugee camp between June 21 and Sept. 3, 2007. This has led to this area being used as a safe haven for Sunni jihadists who are sent from Lebanon to Syria, or as a center for regulating the withdrawal of Jabhat al-Nusra fighters — including those who have been injured — from Syria to northern Lebanon.

Thus, it can be said that the area of Dinniyeh has been repeatedly plunged into Sunni jihadist activity. However, the majority of those involved in these activities come from other areas and are not locals. Yet, among local residents questioned by Al-Monitor — including Islamic officials — it appeared that the name of the jihadist preacher Feiz Mohammad was unknown. This has led some to say that he moved from Australia to Malaysia, and did not return to Lebanon.

People in Lebanese Islamist circles who spoke to Al-Monitor supported this idea. They noted that in mid-September 2012, in light of the acts of violence that Islamists in many parts of the world were carrying out in protest of the film "Innocence of Muslims," a statement was issued in Australia under the name Feiz Mohammad. It was issued in his capacity as "official of the Sunnis," and in it he condemned the acts of violence in Australia.

A well-known fundamentalist Sunni activist from Tripoli, who preferred to remain anonymous, confirmed in a phone conversation with Al-Monitor that the person is in fact Feiz Mohammad, who has moved from country to country since beginning his work in Australia. For a while, he lived in the British city of Liverpool, where nearly a decade ago he founded a center for Islamic preaching. Later, in 2005, he moved to Lebanon, where he married and lived in the Dinniyeh area.

However, Mohammad was once again forced to move, following the aforementioned battles between the Lebanese army and a group known as "Fatah al-Islam." There have been lingering suspicions that Mohammad is linked to an official from this pro-al-Qaeda group [Fatah al-Islam] named Shaker al-Absi. This prompted Mohammad to take up residence in the United Arab Emirates. The Islamic activist we spoke with confirmed that he is still in contact with Mohammad in his new residence, yet did not comment on the discovery of excerpts from his speeches on the YouTube account of one of the Tsarnaev brothers.

Jean Aziz is a contributing writer for Al-Monitor’s Lebanon Pulse. He is a columnist at the Lebanese newspaper Al-Akhbar and host of a weekly political talk show on OTV, a Lebanese TV station. He also teaches communications at the American University of Technology and the Université Saint-Esprit De Kaslik in Lebanon.