Tulin Daloglu writes that Ankara's decision to "talk" with imprisoned PKK leader Abdullah Ocalan offers limited prospects for an agreement on the Kurdish question in Turkey. 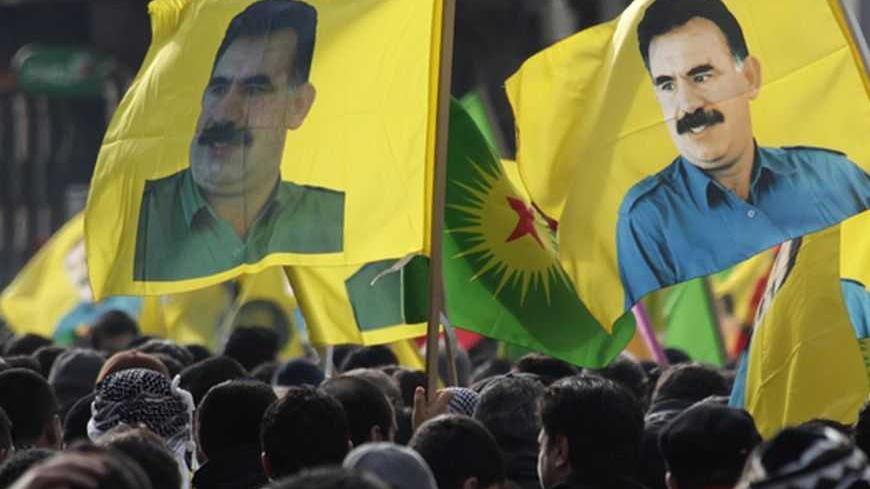 In attempts to find a solution to Turkey’s long-lasting Kurdish issue, Turkish Prime Minister Recep Tayyip Erdogan has officially approved “talks” with Abdullah Ocalan, the imprisoned leader of the PKK. Hakan Fidan, head of the Turkish National Intelligence Organization and a close confidante of Erdogan, is the point man in these “talks.”

The ruling party has gone out of its way to describe these meetings as “talks” rather than “negotiations.” Since news broke that Fidan spent two days on Imrali Island, where Ocalan is imprisoned, just before the New Year, people have been excited about the prospects for consigning this conflict to the history books. With that possibility in mind, many talking heads – from the president to politicians to journalists – have grown increasingly anxious about even commenting on the matter, lest they say something that might imperil this crucial opportunity for peace. Nevertheless, they keep talking.

Not that there's anything wrong with being hopeful – no doubt we all want to see an end to the bloodshed – but I sense this effort is largely for show, like players passing the ball around a soccer field with no intention of scoring a goal. I only hope to be proven wrong, but let me explain why I think the way I do:

Eyup Can, editor in chief of Radikal and a devoted Erdogan supporter, laid out in a Jan. 8 article what he said was the agreed framework for a peace plan with Ocalan. Under the framework, the Kurds would give up their arms on two conditions: a grant of house arrest for Ocalan and general amnesty for his fighters. In return, the Kurds would abandon their goal of building an independent Kurdistan, and would even forsake “democratic autonomy.” They wouldn't even seek to change the system of centralized governance in Turkey into a federal one.

This took me back almost 14 years, when Ocalan was sentenced to life in prison by a Turkish judge at Imrali island. As a BBC reporter, I attended eight of the nine sessions of his trial. According to my notes, Ocalan lost his temper only once: when a group of witnesses who lost family members in PKK attacks challenged him. The judge, Turgut Okyay, tried to restore order in the courtroom as they shouted at Ocalan, showing him photographs of their loved ones. In reply, Ocalan rose and, wearing an expression of utter contempt, shouted: “And I have lost 25,000 men!” At the time, Turkey had officially declared 37,000 people killed by PKK attacks.

Ocalan also said in that courtroom that the PKK weren't fighting to create an independent Kurdistan, but for freedom of opinion and political liberty, the lack of which stood as obstacles in recognizing the cultural and linguistic rights of the Kurdish people. He claimed this was all he wanted, and that it could be worked out.

I still remember the moment when I looked into the eyes of my colleagues in the foreign press, who were clearly as bewildered by Ocalan's statement as I was. He was claiming that he had managed to inspire all these people to go up into the mountains and become fighters just to get their cultural rights recognized. I didn't believe it then, nor do I today.

Can, however, reports that we face a similar situation now: that Ocalan and his fighters only want to secure their cultural and linguistic rights. If we assume that's true for a moment, then why does the Turkish government even need to “talk” with Ocalan? Wasn’t it the Erdogan government that labeled its three-term reign “advanced democracy” – including the opening of TRT 6 or Ses, the Kurdish TV channel, as well as allowing Kurdish courses? Surely such efforts need to continue, but Prime Minister Erdogan has taken pride in implementing them. If we take Erdogan at his word, Turkey is more democratic today than a decade ago. In other words, isn't the Erdogan government already taking steps to recognize Kurdish cultural and linguistic rights?

Many analysts, both sympathetic with AKP government policies and not, argue that Turkey urgently needs to get this issue behind it at a time when the Syrian quagmire has started to show signs of threatening Turkey. They fear the Syrian Kurds will join forces with the Iraqi Kurds, and that the new atmosphere in the region would make it even harder for Ankara to deal with its Kurdish issue.

Only time will tell, but here are the facts: As an aspiring candidate to a full European Union membership, Turkey has a duty to raise the standards of its democracy. If the Kurdish issue is really all about democratic rights, Turkey doesn't even need to worry about developments along its borders. It just needs to get its house in order – without falling into the trap of depending on foreign players to fix its own issues. But Erdogan evidently hopes to address Turkey’s Kurdish dilemma by building a strong relationship with Massoud Barzani, head of the Iraqi Kurdish Regional Government, a man who has devoted himself to Kurdish nationalism, and ultimately to seeking an independent Kurdistan.

Turkey's Kurdish issue isn't really all about democratic standards. The Kurdish nationalists want their own autonomous region. They want to govern their own Kurdish cities. Selahattin Demirtas, chairman of the Peace and Democracy party, or the BDP, the only Kurdish party that has representatives in parliament, has said that they “haven’t given up from their demands of an autonomous” Kurdistan, like in Iraq.

If the current talks with Ocalan actually address such issues, that would be quite troublesome, leading to potentially destabilizing discussions about which cities could be targeted for granting Kurds a greater say in local affairs. Haluk Koc, spokesman for CHP, the main opposition party, said on Thursday, Jan.10, “We’re not briefed about the content of these talks. We just follow the statements from the media.” In June the CHP had proposed a plan to bring together all the political parties in addressing the Kurdish issue, but that offer didn't yield any results.

Now the Erdogan government is taking on the whole responsibility of engaging in a dialogue with the PKK, bypassing the parliament. Although it aims to create an image of transparency, it’s clear the public doesn't really know anything about the content of these talks. Lest I appear overly pessimistic, let me say that I truly wish the Erdogan government success in this effort. Otherwise, despite all the recent commotion in the region, chances of peace between Turks and Kurds may only grow dimmer.

Tulin Daloglu is a columnist for Al-Monitor and a foreign-policy analyst based in Ankara, Turkey. She tweets @TulinDaloglu.