Geoffrey Aronson writes that Khaled Meshaal and Hamas may soon be able to make a bid for leadership of the PLO, given President Mahmoud Abbas’ present weakness. 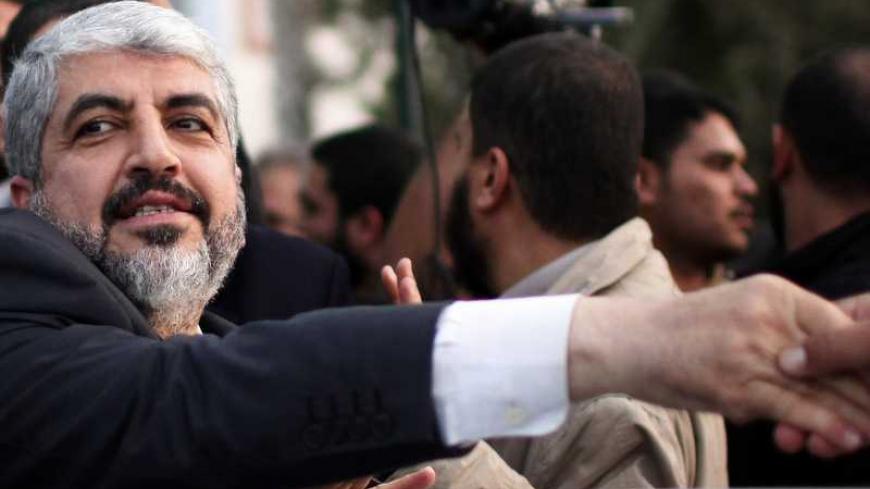 Khaled Meshaal has come a long way from the days when he would sit on a lonely hilltop next to his village of Silwad doing his grammer school homework. There is no solitude on that summit today. The Israeli settlement of Amona is a jumble of prefabricated dwellings surrounding a modern children's playground with a million-dollar view east to Jordan. Silwad sits in the shadow of the small settlement.

Meshaal's horizons are far broader these days. Together with many of his generation, Meshaal left his West Bank village for Kuwait with his family after the June 1967 war. The one-time high school physics teacher, who has led the political bureau of the Islamic Resistance Organization (HAMAS) since 1995,  is said to be  gunning for the top job in the PLO.

This is a new old story, with an important contemporary twist. Since bursting onto the Palestinian political scene during the first intifada, Hamas has tried without success to enter the closed shop that is the PLO. Fatah, first under the leadership of Yasser Arafat and today with Mahmoud Abbas, has owned the franchise. Arafat built the PLO. He worked hard to free the organization from its roots as a play thing of Nasser in the mid-1960s, and cemented “the independence of Palestinian decision-making” to insulate the PLO from the machinations of  third parties. In April 1990, Hamas proposed that the organization be given 40% of seats in the ruling Palestine National Council (PNC). Arafat was prepared to grant entry to the upstart organization, but only on terms that guaranteed rejection. He offered Hamas 18 seats (about 4%), later increased to 24 seats.

As long as the Rais [president] ran the PLO, Hamas had few options, except those earned by resistance to the occupation. The PLO was and remains the internationally recognized representative of the Palestinian people. The Palestinian Authority (PA) created by the Oslo agreement in 1995, was not only a creature of Israel but also of the PLO, which remained the formal diplomatic address for all negotiations with Israel.

Meshaal survived an assassination attempt by the Mossad in Jordan in September 1997. His storybook recovery raised his profile and gave him literally a new lease on life, a sentiment which he notes often in his public remarks. The failed effort won him a degree of immunity, and Israel through its actions has removed many who might have opposed with greater vigor and success Meshaal's brand of  Palestinian nationalism.

For Meshaal, the PLO and its parliament, the PNC, rather than the struggling PA, was  the real prize, and that is why Fatah has been determined to deny it to Hamas. Negotiations on reforming the PLO in a manner that will recognize and accommodate Hamas' increased stature in the Palestinian community have been fitfully conducted under Egyptian auspices for almost a decade without consequence.

That may be about to change. Meshaal is a skilled operator and deal maker who has already made the transititon from armed resistance /Islamic awakening outlyer to able practitioner of raison d'etat. It is no secret that he aspires to Palestinian leadership beyond the sectarian confines of Hamas. Under his tenure, Hamas has outshone Fatah in the contest to liberate Palestine, investing the Gaza Strip with  attributes of sovereignty that the Ramallah-based Palestinian Authority can only dream about. No doubt for Meshaal the legitimacy conferred by leadership of the PLO trumps that offered by Hamas, and surely more than the status offered to those running the impoverished Gaza rump of the PA.

“To listen to him,” explained an Egyptian diplomat some years ago, “you would think that he was a Palestinian nationalist from the 1950s.” Indeed, Meshaal is a true believer. In a speech marking his triumphant visit to Gaza on Dec. 8 last year, he declared, “Palestine is one, unified whole. The West Bank, Gaza, and the land lost in 1948 is all Palestine. It is impossible to separate its parts. To whoever thinks that the West Bank and Gaza are divided — they, and the land lost in 1948, are all parts of Palestine.

Meshaal may be a true son of the revolution, but he is also, and perhaps first and foremost, a skilled political operator who has compiled a record of leadership in the diplomatic arena. He has mended fences with Jordan, which fears that Fatah has proven an unreliable partner in the management of the West Bank, and has powerful patrons in the Gulf and Egypt. But nowhere are Hamas' achievements more evident  than in the conduct of relations with Israel, with whom over the past decade Meshaal has established a more dynamic relationship — punctuated by the consolidation of Hamas' power in Gaza and the Shalit/prisoner release — than Abu Mazen has managed to achieve. These gains remain fragile, but they attest to the attraction — to Hamas' and to Israel's leadership – of an alternative to the relationship forged by Oslo.

Indeed, Meshaal is said to have told Abu Mazen during talks in Mecca in early 2007, "You should pray that I continue refusing to recognize Israel, because if I do, what need will they have for you?”

Representatives from all Palestinian factions are meant to try yet again in the coming weeks to make good on their commitment to reconciliation, including elections in the West Bank, East Jerusalem, and Gaza Strip, the creation of a national unity government there, and the reform of the PLO.

Fatah may well prove less an obstacle than it has been to Hamas' aspirations for the PLO in general and Meshaal's' interest in PLO leadership in particular.  Fatah as an organization appears stuck in a race to the bottom, both organizationally and politically as the leader of the effort to liberate the occupied territories.

"Fatah is still the one that is most capable of realizing the Palestinian national enterprise because it is a movement of Palestinian moderation and a national movement par excellence,” explained Fatah leader Husam Khadir, in a recent interview with Hamas' Filastin al-Yawm."Fatah is now in a pitiful condition. It is going through its worst state because of the complete absence of the role of its leadership, absenting and marginalizing the role of the institution, and not extending support by the top of the Fatah pyramid."

Fatah’s declining fortunes are mirrored by those of Abu Mazen, whose interest in relinquishing a leadership role is no secret. To the extent that Hamas is considered to be leading the wave of the future, Meshaal is well-placed to mount a friendly takeover of the PLO franchise.