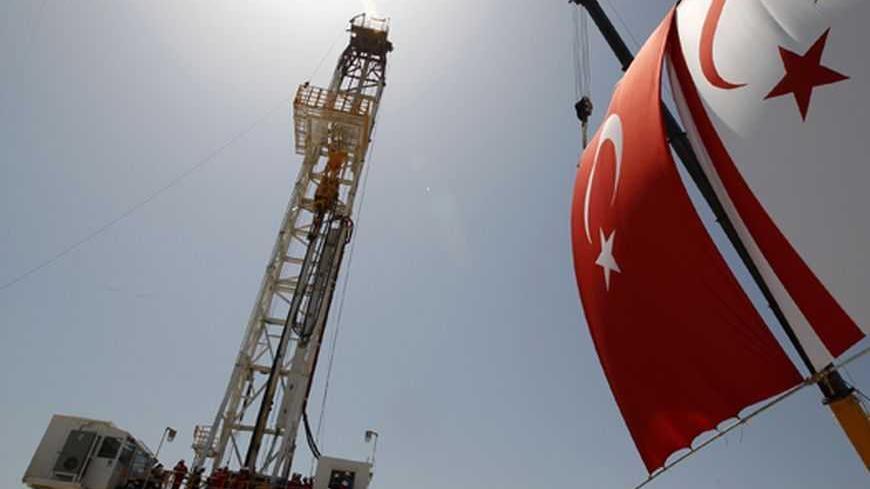 Turkish and Turkish Cypriot flags wave next to a drilling tower 16 miles from Famagusta in Cyprus, Apr. 26, 2012. - REUTERS/Umit Bektas

The discovery of oil and natural gas at the basin of the eastern Mediterranean Sea has taken the genie out of the bottle. Now Greece wants to strike against Turkish interests by claiming full sovereignty over this newly found wealth near Turkey’s shores. There is, however, a popular Turkish saying for such circumstances: Don't say "Amen" for something that won't happen.

Here is the issue: The Greek weekly To Vima reported over the weekend that Greece is preparing to make a unilateral declaration to the United Nations seeking to determine its demarcation line based on what Greece thinks are the limits of its exclusive economic zone in the Aegean and the eastern Mediterranean. Accordingly, Greece would double its sovereign rights in the disputed territorial waters with Turkey, and would allow almost no room for Turkey to exploit its coastline. The report also suggested that Greek Prime Minister Antonis Samaras is paying a great deal of importance to the issue, and believes that Turkey won't have the energy to indulge in a new crisis with Greece while it is already overwhelmed dealing with its own Kurdish issue and the Syrian crisis.

What makes Samaras think that Turkey will easily concede its long-term interests is another interesting detail in the story. It's true that Turkish Prime Minister Recep Tayyip Erdogan’s government has nearly exhausted its energy and political capital trying to expand the country's presence in the Middle East, and that Erdogan’s efforts to position himself as the leader of the Sunni world have reached a stumbling block. It's also true that Turkish Foreign Minister Ahmet Davutoglu’s failed "zero problems with neighbors" policy is not only causing problems for his political future, but has also branded Ankara as a daydreamer. That said, it would be naïve to assume that the Turkish state is going to give up its long-term interests in the disputed Aegean and Mediterranean territorial waters.

Just as Greece has the right to apply to the international body for the demarcation of its exclusive economic zone, Turkey no doubt has the same rights. "In such a situation, Turkey takes counter-action," said Davutoglu, trying to downplay the unilateral attempt by Greece that scored yet another embarrassment to his illusionist policy of "zero problems with neighbors." "While Turkey-Greece relations have gained momentum, it is important to move together in this process,” he said on Jan. 7.

With the discovery of rich hydrocarbon fields in the eastern Mediterranean basin, and possibly in the Aegean, Greece is trying to free its hand from its long-standing territorial water disputes with Turkey. As a signatory to the UN Convention on the Law of the Sea (UNCLOS), Greece claims that it has the right to extend its territorial waters up to 12 nautical miles, and its exclusive economic zone up to 200 nautical miles.

While UNCLOS may on paper favor Greek demands, it certainly does not tell the whole story. One of the main elements of the international law of the sea concerning exclusive economic zones concerns equity. This is linked to geography as well as fairness. These are also reasons why Turkey rejected becoming a signatory to this international agreement.

Take the Greek island of Kastellorizo, or Meis in Turkish, as an example. It’s only 2 kilometers (1.2 miles) from the Turkish coastline. It occupies an area almost 12 square kilometers (4.6 square miles) with a population of fewer than 500 people. Forget about the big issues like sharing the wealth of the sea and the hydrocarbon fields: Greek demands suggest that Turks should only be a spectator of the sea at their shores, as if looking at a painting, and that they cannot even take a swim in it. Such an approach not only defies logic, but surely isn't serious.

As Davutoglu said, Turkey will respond if and when Greece officially applies to the UN with this request. If nothing else, the Turkish foreign ministry has true expertise over territorial water disputes in the Aegean and the eastern Mediterranean, as well as the Cyprus issue. From that perspective, the path ahead is going to be long and will likely present the Greek side with a reality check. Just because Athens came up with an idea does not mean that it’s going to be implemented.