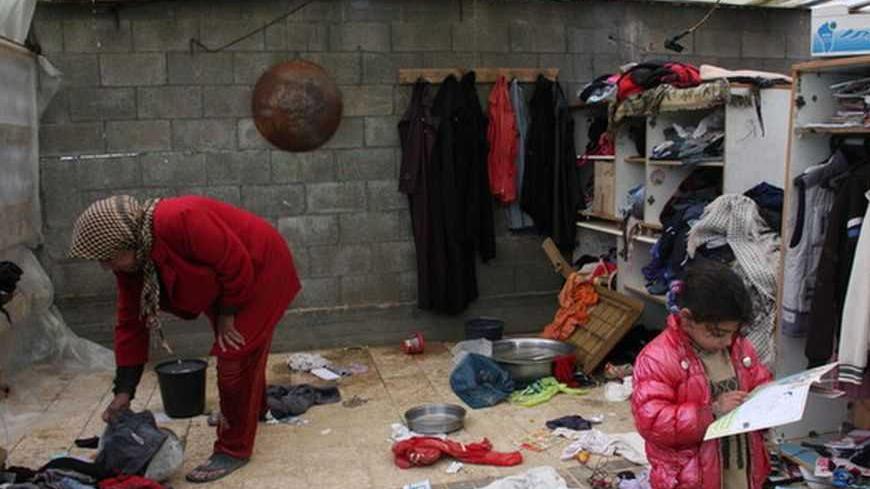 Om Sobhi Awaja gathers her seven children around a small fire as the cold winter air blows into her home that has no flooring, windows or doors. The smoke from the fire stings the children’s eyes, but there’s no other way to keep them warm.

“Since January 2009, I haven’t slept a night in peace,” said Om Sobhi while changing her daughter’s sweater, wet from the weather.

Om Sobhi’s house, in the northern neighborhood of Bet-Lahya near the Israeli border, was devastated during the 22-day Israeli offensive in 2008-2009 when an Israeli tank crushed it and killed her nine-year-old son. The family moved between tents, mud houses and makeshift shelters until the United Nations Relief and Works Agency (UNRWA) enlisted them in a rebuilding program.

Her husband, Abu Sobhi, demolished the temporary mud house and started building on the same space, settling his family in a nearby shack with a plastic roof after the UNRWA granted them two payments. But the reconstruction is taking time.

The UNRWA gives Abu Sobhi $260 per meter in every payment, but he has to wait between one to two months for every check. The UN money does not allow for the sharp fluctuations in material prices. Construction material is mostly smuggled in from Egypt due to Israel’s siege, which prevents most materials from entering. The prices of construction products doubled after Egypt’s recent crackdown on the tunnels following last August’s border attack that killed 16 Egyptian soldiers.

Om Sobhi thought she would be done rebuilding the house before the deep winter cold set in, but the continued instability in Gaza put a halt to those ambitions. She was forced to leave the shack after winds destroyed it, and their belongings and clothes were exposed to water. The family now shuttles back and forth between the destroyed shack and the incomplete house that they are still rebuilding.

“Since the winter started, I haven’t slept one full night. I had to keep changing the pans I was using for the water that is pouring everywhere in the shack. It's such a nightmare,” Om Sobhi sighed.

Om Sobhi said the incomplete house is currently not much better than the shack, as it is not yet equipped with rest rooms.

“My children have to go to the rest room of the shack, which is meters away, even when it’s heavily raining,” she explained.

Om Sobhi expressed her anger at the Hamas government and the UNRWA as “no one comes to check, as if we don’t even exist.”

Adnan Abu Hasna, spokesman for UNRWA in Gaza, said that his agency has been working on an emergency program since the storm started, adding that families should seek help from the UN body.

“We presented non-food items for all the families that have applied for the program. We can’t visit a large number of families; they should come and ask for help,” Abu Hasna said.

Last week’s storm was the fiercest in Gaza in a decade, with continued power outages adding to the misery. The latest tally had at least eight houses severely damaged by the storm, with 24 people injured and 11 cases of fire due to the misuse of candles during the electricity blackout.

The storm also came on the anniversary of what Om Sobhi calls “the disaster:” the death of her son. She recalled the night when her nine-year-old boy was killed and her house turned into rubble.

“It was the same deadly cold when we spent the night in the street, looking at Ibrahim dying in front of us.”

But despite the dangers, Om Subhi said that she will never part with her home.

“I still feel Ibrahim’s soul inside the house. I don’t want to leave him.”

Abeer Ayyoub graduated from the Islamic University of Gaza with a BA in English literature. She is a former human rights researcher turned journalist whose work has appeared in Al Masry Al-Youm, The Daily Mirror and Haaretz.