A virtual US embassy provides Iranians with news and services, but is no substitute for the real thing, reports Barbara Slavin. 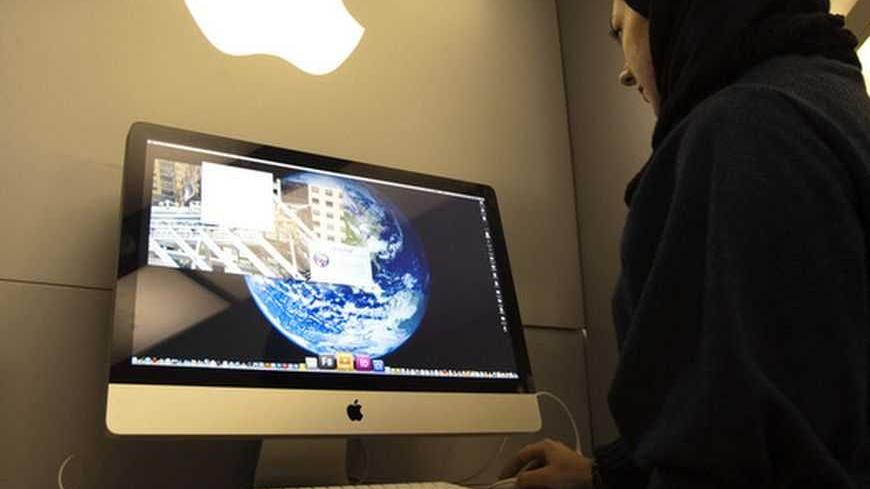 A woman uses an iMac computer in a shop at a mobile and computer shopping complex in northern Tehran Jan. 18, 2011. - REUTERS/Raheb Homavandi

When a surge of hits from Internet Protocol (IP) addresses in Nigeria pop up on the US Embassy Iran website, the US State Department is not puzzled but pleased.

Nigeria has no appreciable Iranian population, so the Obama administration figures that the hits are coming from Iranians seeking to circumvent their government’s efforts to block the site.

There has been no functioning US Embassy in Iran since Nov. 4, 1979, when radical students seized the sprawling compound in downtown Tehran and held American diplomats hostage. But for the past year, Iranians have been able to access an online menu of information and services that partly compensates for the absence of a physical US diplomatic outpost in the Iranian capital.

The virtual embassy was inaugurated on Dec. 6, 2011 — as it happened that year, the culmination of the Shiite holy period of Ashoura, which commemorates the death of the Prophet Mohammad’s grandson, Hossein, in the Iraqi desert in the seventh century. A State Department official, who spoke to Al-Monitor on condition of anonymity, said there was concern that the launch date would offend devout Iranians but that the timing actually worked out quite well.

The security people who normally monitor Internet traffic in Iran and block sites the government views as subversive were off duty for the holiday, the US official said. With their guard down, “we got five to six hours of lead time before they caught up to us and blocked access through IP addresses in Iran.”

That’s when the hits started coming from Nigeria, the official said. “When we see huge numbers from third countries where there is no significant Iranian population, we assume they are really coming from Iran.”

Over the past year, there have been almost two million distinct page hits and nearly half a million distinct visitors to the site, the State Department official said. The fact that over 78% of the hits have been on the Farsi version of the site — and that tens of thousands of hits have come from IP addresses in countries without many Iranian residents — suggests that the “vast majority” of those accessing the site are in Iran, the official said.

While no substitute for a real embassy, the virtual one combines public diplomacy functions — stories about US government policies and news of interest to Iranians — with practical services, such as how to apply for a visa or get information about educational opportunities in the US. Applications for visas can be filled out online and appointments scheduled at US consular offices in nearby Turkey, Armenia or the United Arab Emirates.

The site also features links to Farsi-language social-media platforms managed by the US government, including ones on Facebook, Google+, Twitter and YouTube. The Facebook page currently has about 87,000 fans, of whom two thirds are believed to be in Iran, the State Department official said. He added that about 170 videos posted on the YouTube site so far have attracted more than 800,000 views — “pretty good given the [slow] download speeds” in Iran. Those videos can be shared via compact discs and zip drives, he added.

The Iranian government periodically blocks the sites. The Facebook page was jammed for about 15 months but is currently accessible in Iran, the official said.

“People go on it,” Tara Sonenshine, undersecretary of state for public diplomacy and public affairs, told a Washington audience recently, describing the virtual embassy and its related links. “They get knocked off every now and then, cut off and they try to reconnect. And we know they’re reconnecting.”

Asked by Al-Monitor how she measures the impact of the virtual embassy, Sonenshine said “you can see a lot of traffic in other places from people who’ve seen something on the virtual Iran website that they’re thinking about or talking about. So the interesting thing is all these conversations multiply exponentially.”

“We know that that forum is enabling us to talk about educational opportunity, freedom of expression, defense of civil liberties and that we still do care that there is a place for a voice for an Iranian person,” Sonenshine told the audience at the Washington Institute for Near East Policy. “And yes, we do use it to counter some negative regime portrayals of US policy, and we do create our own debate and discussion inside Iran, and I think we have a chance of isolating extremists and hardliners and sowing the seeds for democratic change.”

Reza Marashi, director of research at the National Iranian American Council and an Iranian American who previously worked for the State Department, called the virtual embassy “a great way to increase outreach and dialogue with the Iranian people.”

“On the other hand, Iranians inside Iran are looking for examples of US actions, not [President Barack] Obama’s words, telling the story of America’s Iran policy,” Marashi told Al-Monitor. “To that end, neatly packaged public diplomacy like the virtual embassy is not a substitute for compelling policies — and actual results — that matter to the Iranian people, like the multiple-entry visa policy change in 2011 [that allows Iranian students to leave and re-enter the US]. This is particularly true at a time when sanctions and government mismanagement are really starting to hurt the people that America says it seeks to help,” he said.

The State Department official told Al-Monitor that there are obvious limitations to what a virtual embassy can accomplish.

“It’s hard to follow up in a meaningful way,” he said, without a “brick-and-mortar mission” that permits timely face-to-face meetings. And of course, a virtual embassy cannot provide political asylum to dissidents. “We can give their virtual avatar asylum,” the State Department official quipped.

However, the Iranian government, judging by its frequent efforts to block the site, clearly takes it and other such US outreach efforts seriously.

“Why are imperialistic regimes ready to spend billions of dollars to bombard us with ideological and cultural propaganda through satellites, the Internet and other media, when they have deprived us of most advanced technologies — from spare parts for passenger planes, cars, medicine and commercial trade?” the hard-line Keyhan newspaper editorialized on Jan. 22, according to a translation by Mideast Mirror. “What makes these mean and monopolist wolves so generous in culture and media that they intend to provide free media to our poorest people in the most remote areas?”

Despite threatening for the past two years to create a so-called “halal” or religiously approved Internet for Iranians, the government has yet to do so. “They can’t shut it [the worldwide web] down without doing grievous harm to their oil and banking sectors, which need to talk to the outside world,” the State Department official said.

Instead, Supreme Leader Ayatollah Ali Khamenei has created his own Twitter, Facebook and Instagram accounts — in effect saying that if he can’t beat the competition, he may as well join them.