‘Containment’ Not a Dirty Word When it Comes to Managing Iran

President Obama has insisted that “containing” a nuclear Iran is not an option. Anything less has come to be viewed as appeasement. But containment has been US policy toward Iran for the past 33 years and is likely to continue to be for the foreseeable future, especially if negotiations due to resume in May fail and Iran actually builds nuclear weapons. 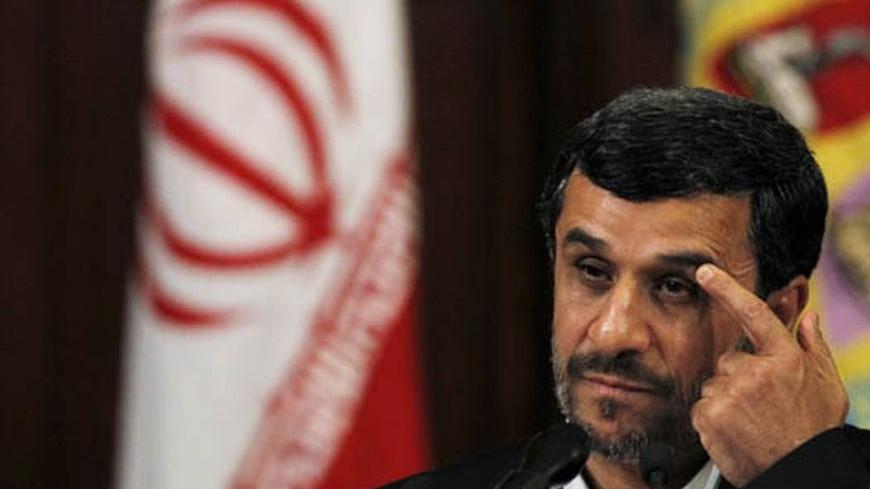 Iran's President Mahmoud Ahmadinejad addresses the audience during a conference at the University of Havana January 11, 2012 - REUTERS/Enrique de la Osa

In recent months, as the debate over Iran’s nuclear program has become increasingly heated, US President Obama and other senior officials have insisted that “containing” Iran is not an option.

Indeed, Obama assured Israeli Prime Minister Netanyahu and the American Israel Public Affairs Committee in March that his policy was “prevention,” even if that required using military force.

However, containment has been US policy toward Iran for the past 33 years and is likely to continue to be so for the foreseeable future. Obama dare not say so, however, because containment has somehow become synonymous in certain circles with appeasement and acceptance of an Iran with nuclear weapons.

George Kennan, the great US Cold War strategist, coined "containment" to describe a range of actions designed to reduce the Soviet Union’s capacity for threatening Western interests. While military force was certainly an option, Kennan believed that economic and political support for fragile European societies was more likely to stop the Soviet advance. He predicted correctly that the Soviet system would ultimately dissolve because of internal contradictions and failure to produce a prosperous and contented society.

Containment reached its peak under the Reagan administration. Reagan launched an arms race that an overextended Soviet Union sought unsuccessfully to match, supported anti-Soviet rebels around the world and used tough-guy rhetoric, such as his famous injunction in Berlin:  “Mr. Gorbachev, tear down this wall.” He coupled these policies, however, with vigorous engagement with Soviet leaders, especially Mikhail Gorbachev, and was the first US president to declare a nuclear-weapons-free world as his goal.

Obama likes to compare himself to Reagan and has been Reaganesque, if not in his rhetoric, then in combining engagement with pressure, including record military sales to Iran’s nervous Arab neighbors, a robust US military presence in and around the Persian Gulf and draconian economic sanctions against Iran that have been embraced by Europe.

Obama’s initial outreach to Iran, coupled with widespread revulsion at Iran’s crackdown on peaceful protestors following its 2009 presidential elections, helped isolate the regime to an extent not seen in the history of the Islamic Republic.

While it is too soon to say that the Arab Spring will benefit the United States, it does not appear to be working out well for Iran. Iran’s crackdown on reformists and its support for Assad in Syria have discredited the Iranian narrative of siding with the oppressed and widened the divide between Shiite and Sunni Muslims. Saudi Arabia, Qatar and the United Arab Emirates are actively working to contain Iran in Syria and Bahrain.

Feeling pressured, Iran agreed to come back to talks with the United States, France, Britain, Russia, China and Germany earlier this month. The first round of negotiations in Istanbul April 13-14 did not yield concrete results and hawks in the US and Israel have already declared the whole process a failure. Netanyahu complained that Iran had gotten a “freebie.”

However, negotiations — which are due to continue in May — are an essential element of containment; the more reasonable the US and its partners appear, the more the onus will be on Iran for refusing to compromise. So far, the Iranian government is putting a positive spin on the talks and Iranian media are suggesting that a “win-win” solution is at hand. That has raised optimism about achieving a narrow deal that would cap Iran’s uranium enrichment and buy time for a longer-term solution.

If, however, the process breaks down and Iran does actually build nuclear weapons, containment is still the right response.

Paul Pillar, a former senior US intelligence official who dealt for decades with the Middle East, told an audience last week (April 18) at the Middle East Institute in Washington that nuclear weapons would not fundamentally change the behavior of the Iranian regime.

Many of the arguments against a nuclear Iran boil down to “a vague sense that Iran would feel its oats a little bit more than it does now … together with worst-case assumptions of what Iran might do,” Pillar said. He said that he had not been able to think of a single issue on which a nuclear-armed Iran would choose even to threaten nuclear war to achieve its aims.

“The Tunbs islands?” Pillar said, referring to three islands Iran controls in the Strait of Hormuz, and that the UAE also claims. “I don’t think so.”

Pillar also disputed the notion that there would be a “cascade of proliferation” in the region, while conceding that the US might need to refresh its declaratory policy toward Arab allies with an updated “Carter Doctrine” to reassure nervous states along the Persian Gulf.

Pillar also questioned claims — mostly by Israel and its supporters — that Iranian adversaries such as Saudi Arabia would support a US or Israeli “preventive” attack on Iran. That is “an urban myth,” Pillar said.

In fact, polls show that Arab populations regard Israel and the United States as bigger threats to their security than Iran. While Arab leaders seek to check Iranian influence, they do not want another Middle East war in which their own territories and resources might bear the brunt of Iranian retaliation.

In a city not known for patience, particularly in a presidential election year, advocating continuation of the same policy can be a tough sell. Yet containment has worked in the past with far more threatening regimes and there is no reason to think it will not ultimately succeed with Iran. Certainly, the alternatives are no better and most likely far worse.

Barbara Slavin is Washington correspondent for Al-Monitor and a senior fellow at the Atlantic Council, where she specializes on Iran. She appeared on a panel with Pillar at the Middle East Institute.