With President Obama and Israeli Prime Minister Netanyahu both addressing AIPAC this week in Washington, it is already clear that US and Israeli policies on Iran will continue diverge in key respects. Al-Monitor Washington correspondent Barbara Slavin talks to veteran peace negotiators about what's next. 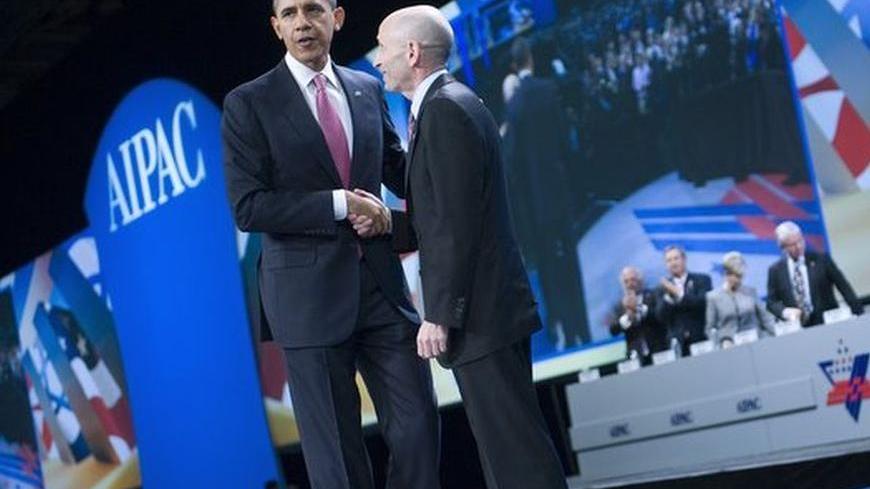 US President Barack Obama told the American Israel Public Affairs Committee in Washington  Sunday the he would use “all elements of American power” to prevent Iran from acquiring a nuclear weapon[1].

But his emphasis on diplomacy rather than war – and his refusal, at least in public, to define a red line short of an actual bomb -- suggests that U.S. and Israeli policies on Iran continue to diverge in important respects.

On Monday, Israeli Prime Minister Benjamin Netanyahu will make his own speech to the annual conclave of the Israel lobby after he meets with Obama in the Oval Office. Republican candidates for the U.S. presidency will also address the conference this week and may seek to exploit perceived gaps between Netanyahu and Obama.

Netanyahu, speaking in Canada Sunday, said he welcomed Obama’s remarks. But the Israeli leader has been far more bellicose, warning that time is running out to stop Iran from developing the “capability” to make a weapon and expressing opposition to new talks with Iran unless it first stops enriching uranium.

The lack of trust between the United States and Israel over Iran is serious — judging by the number of recent visits by Israeli officials to Washington and Americans to Tel Aviv, as well as leaks by disgruntled Netanyahu supporters to the media[2].

The problem for Netanyahu is that the Obama administration does not view Iran — even an Iran with nuclear weapons — as an existential threat that is worth starting another war. This has been made abundantly clear over the past few months by a host of current and former US officials including Defense Secretary Leon Panetta.

Netanyahu, on the other hand, insists on stressing the option of a military strike in hopes of keeping Iran from crossing the nuclear threshold and of maintaining pressure on Europe and the United States to tighten economic sanctions against the Islamic Republic. But with Iran’s leaders already on edge because of the sanctions, assassinations of scientists and internal political dissension, the chances for miscalculation are high. The consequences of a conflict would be dire for Americans, Israelis, Iranians and the wider oil-consuming world. Meanwhile, all the war talk is pushing up the price of oil — inadvertently helping Iran.

On Sunday, Obama decried what he called the “loose talk” of war and spoke eloquently of the costs of military conflict for a nation that has fought two wars in the last decade. The “most searing” moments of his presidency, he said, had come when meeting the relatives of Americans killed and injured in Iraq and Afghanistan.

“As commander in chief, I have a deeply held preference for peace over war,” he said.  He said that economic sanctions were having an impact on Iran and that diplomacy “backed by pressure” could still succeed.

Obama also refrained from using the phrase “nuclear weapons capability” and spoke only of actual nuclear weapons. That suggests that the U.S. would not contemplate military action unless Iran actually tested a weapon. Israel wants to act much earlier but lacks the resources to do as much damage as the United States could do.

However, even Israel concedes that military action would only delay an Iranian nuclear weapon and might even cause Iran to accelerate efforts to get a bomb. Obama noted Sunday that “the only way to truly solve this problem is for the Iranian government to make a decision to forsake nuclear weapons.”

While Obama denied that his policy is one of containing an Iran, many analysts believe that a nuclear-armed Iran can be deterred and contained. Even if Iran were to develop such a weapon, they say, it would never use one because to do so would be suicidal.

A recent report[3] by Anthony Cordesman and Alexander Wilner for the Center for Strategic and International Studies notes that Israel, which has at least 100 nuclear weapons, poses an existential threat to Iran since it could destroy “five to seven major Iranian cities.” Israel also has three ways of delivering a nuclear bomb: by missile, submarine or plane.

Iran insists it does not intend to make weapons; the Obama administration says that Iran does not appear to have made the decision to build or test a bomb. However, if that policy were to change, one Iranian bomb would do extensive damage to the Jewish state. An Iran with nuclear weapons would also likely convince others in the region — in particular, Saudi Arabia — to acquire nuclear weapons of their own.

Barry Pavel, director of the International Security Program at the Atlantic Council, a Washington think tank, says deterring a nuclear Iran would require a more complicated policy than that which for 50 years prevented a nuclear confrontation between the West and the old Soviet Union.

“I’m not saying it won’t work but it’s not as stable an equilibrium as during the Cold War,” he said in an interview.

He added that he was not optimistic that differences over Iran between Netanyahu and Obama can be bridged.

Others are more sanguine.

Aaron David Miller, who dealt with Israeli officials for decades as a US peace negotiator, said he doubts Netanyahu would start a conflict, no matter his fears of Iran and his dislike of Obama.

“Nobody, not even the [Israeli] prime minister, wants to put himself in a position where he is undertaking unilateral military action in the face of American neutrality or opposition,” Miller said.

Dennis Ross, another former US negotiator who recently left the Obama White House after serving as a senior adviser on the region, said that while “the views will never be identical, the gap [between Obama and Netanyahu] is less profound than people think.” Obama, Ross noted, takes the issue of curbing the spread of nuclear weapons very seriously and would regard a nuclear Iran as a “devastating” blow to the nonproliferation regime.

The differences, Ross said, center over what the US would be willing to concede to Iran in terms of uranium enrichment and the time frame for negotiations, which he said could resume as early as the end of March. Israel wants no enrichment and worries that Iran will use talks as a delaying mechanism while amassing more material for weapons in locations that cannot be easily targeted.[4]

It is clear that the Obama administration has to work on a number of fronts to calm Israel and contain Iran, seeking to retard the Iranian program while providing reassurance to Israel and Iran’s Arab adversaries that Iran could not commit an act of nuclear aggression and survive as a viable state.

With US political polls shifting increasingly toward Obama as the Republican nomination fight drags on, Netanyahu may also calculate that a bigger and more immediate threat to Israel would be to alienate an administration that looks increasingly likely to govern the United States for the next four years.