Experts warn that it may soon be too late to prevent a nuclear Iran, necessitating an American military intervention for which Israel may bear the blame, reports Barbara Slavin from the J-Street convention. A prolonged conflict could both weaken the Israeli-US alliance and be detrimental to US interests. 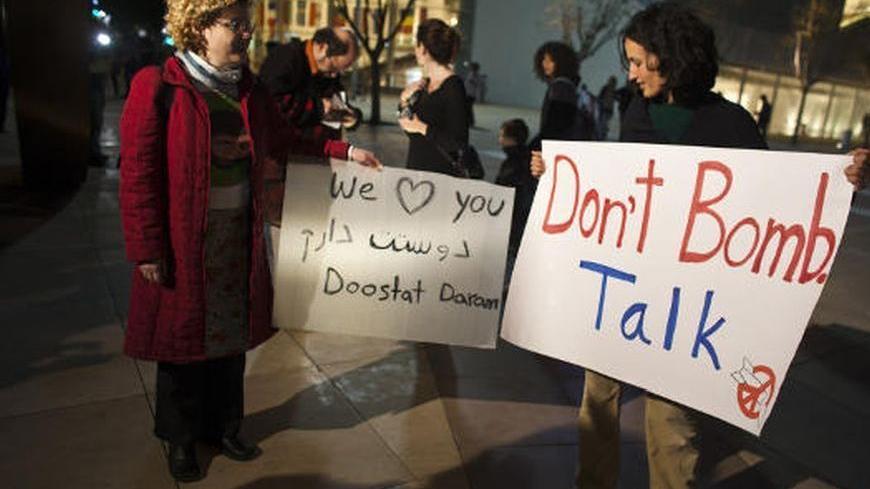 Israelis hold placards as they protest, against a possible attack of Iran's nuclear facilities, in Tel Aviv March 24, 2012. - REUTERS/Nir Elias

A thread of anxiety ran through a conference of liberal American Jews and Israelis Sunday [March 25]. The worry: that Israel would bear the blame for any military confrontation between the United States and Iran.

Retired brigadier general Shlomo Brom, a former director of strategic planning for the Israeli Defense Forces General Staff, told an audience at the J-Street convention that he had participated in talks with the George W. Bush administration before it attacked Iraq in 2003.

Contrary to the prevalent narrative, he said that the Israelis had argued vociferously that there was no need to strike Iraq because Saddam Hussein was contained following the 1991 Gulf War, and that the real threat was Iran.

“This time, it will not be a false accusation [of Israeli responsibility],” he added, if the US starts a war with Iran or is dragged into one by Israeli action.

Israeli Prime Minister Benjamin Netanyahu has made Iran’s nuclear program a centerpiece of his foreign policy and it dominates his dialogue with the administration of US President Barack Obama.

While the prospects for a unilateral Israeli strike on Iran appear to have diminished since the two leaders met earlier in March, Israeli officials continue to threaten Iran with military action and to describe the Iranian nuclear program as an existential threat.

Obama, attending a nuclear security summit in Seoul, South Korea, said that a “window of opportunity” for a diplomatic resolution of the issue may be closing and reiterated that a US military option remains.

This has increased the pressure to demonstrate results at a new round of talks scheduled in April between Iran and the so-called P5+1, the five permanent members of the UN Security Council plus Germany.

Both Netanyahu and Israeli Defense Minister Ehud Barak have warned that it may soon be too late to stop Iran from developing nuclear weapons because Iran is continuing to enrich uranium and is placing more of that production deep underground.

Brom said he shared that analysis.

Even if it would take Iran a year to 18 months to actually build a weapon after deciding to do so, by then it will have taken sufficient steps to increase protection for the program and will have entered what Barak calls a “zone of immunity,” he said.

However, Brom expressed doubt about what Israel could accomplish against Iran on its own and called scenarios in which Israel would resort to the use of nuclear weapons to destroy Iran’s program “completely crazy.”

Brom downplayed the chances of massive military retaliation by Iran or its allies against Israel should it attack Iran. However, he and other speakers at the convention said they were very worried about the economic and political repercussions of any military exchange with Iran.

Avishay Braverman, an economist and member of the Israeli Knesset from the center-left Labor Party and who once worked at the World Bank, said the price of oil could rise above $200 a barrel, jeopardizing fragile recoveries, especially in Europe.

With unemployment in Greece and Spain already over 20%, such a price spike would cause economic chaos and inflame anti-Semitism, Braverman said. “The finger will be pointed toward Israel and maybe the Jews [as a whole],” he said.

Shibley Telhami, a Middle East expert at the University of Maryland and the Brookings Institution, has conducted recent polls in Israel showing that only 19% support a unilateral Israeli strike on Iran.

One reason, he suggested, is the impact such a strike would have on Israel’s posture within the region, where Arabs consistently rate Israel as the number-one threat, followed by the United States and Iran.

Despite the anti-Iran views of some Arab governments, “if you are going to have war with Iran, guess who [the Arabs] will be rooting for,” Telhami said.

Heather Hurlburt, executive director of the National Security Network , said at the J-Street conference that she was concerned about the long-term impact of an Iran war on the US alliance with Israel.

While a majority of Americans would support Israel against Iran initially, a prolonged conflict could lead to a “weakening and lack of trust” between the Israeli and American militaries and bolster isolationism within the general US population, she said.

A recent classified war game predicted that an Israeli strike on Iran would inevitably draw in the United States and lead to hundreds of US military casualties in and around the Persian Gulf.

US forces in Afghanistan would also be at risk.

US military officials have said that Israel might not tell them in advance if it decides to strike Iran.

Barbara Slavin is Washington correspondent for Al-Monitor.com and a senior fellow at the Atlantic Council, specializing on Iran. She moderated a panel on Israel and Iran March 25 at the J-Street convention.