In an exclusive report, Barbara Slavin covers a "competitive influence" game meant to stretch the minds of the US military. The object of the game, she writes, was not to overthrow Assad, tame Hezbollah or stop Iran’s nuclear program, but to leverage US capabilities and alliances and better understand how the region’s many actors fit together. 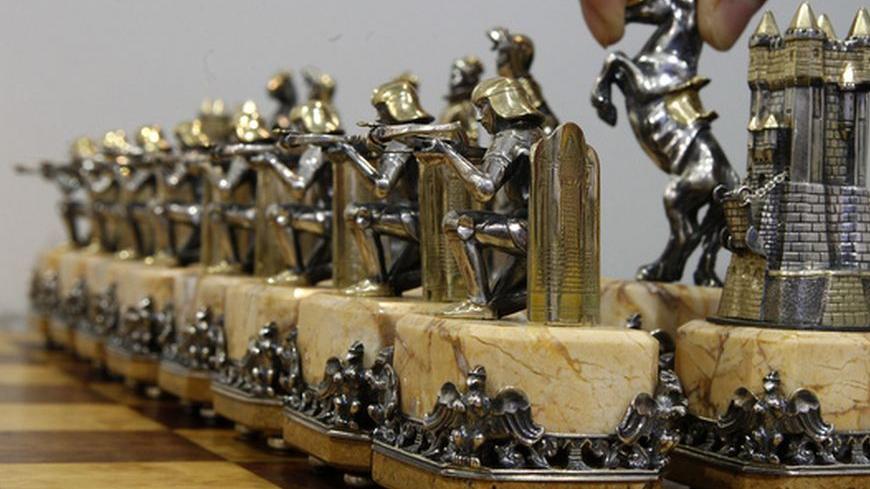 The "Chess of the Middle Ages" exhibit, made of gold, silver and other jewelry, is displayed during the "Junwex. Petersburg" jewelry exhibition in St. Petersburg, February 1, 2012. - REUTERS/Alexander Demianchuk

A year from now, the US, NATO and Arab allies will be patrolling a no-fly zone over a safe haven in northwestern Syria that is home to more than 1.5 million internally displaced Syrians and non-Syrian refugees.

Syrian President Bashar al-Assad, while still in power in Damascus, will have been severely injured by a suicide bomber.

The UN Security Council will have finally passed a resolution on Syria — to safeguard Syria’s chemical arsenal. Iran will have been invited to multilateral negotiations with the US, Russia, Turkey and the Arab League that are nominally about weapons of mass destruction but really about shaping a post-Assad regime. In return for a seat at the Syria table, Iran will have halted enrichment of uranium to 20%, sent out its stockpile to Russia and replaced Iranian Quds Force operatives in Syria with representatives of “humanitarian” non-governmental organizations.

None of this may come to pass, but that isn’t the point.

The above scenario was concocted to stretch the minds of the US military, help it not repeat mistakes made in Afghanistan and Iraq and, if possible, avoid the use of lethal military force altogether.

“Despite being in conflict the better part of the last 11 years, we still don’t have all the answers,” said Lieut. Col. Thomas Goldner, operations officer for the US Army’s Asymmetric Warfare Group (AWG). He opened the “competitive influence game” played out over four days last week (July 24-27) at a conference center at MacDill Air Force base in Tampa, Fla.

The game grew out of a brainstorming seminar in Maryland in May that identified Syria as the nexus of multiple challenges for US foreign and defense policy. Most of the more than 130 people who took part were Americans — active and retired military, civilian Pentagon employees, defense contractors, former and current State Department officers, think-tankers and academics. There were also a few non-Americans, including a retired brigadier general from Israel and a Turkish army liaison to US Central Command

Founded in 2006 to deal with “complex threats,” AWG has held six similar games on topics ranging from al-Qaeda to Hezbollah in Latin America. Organizers said, however, that this was the first time they had tackled such a rapidly moving target, with developments literally ripped from the day’s headlines. That made for a livelier exercise as players proposed moves that hours later had sometimes actually taken place.

The object of the game was not to figure out how to overthrow Assad, convert Hezbollah into a benign political movement or stop Iran’s nuclear program, but to leverage US capabilities and alliances and better understand how the region’s many actors fit together.

According to a system devised by the Johns Hopkins Applied Physics Laboratory, players were rewarded for maximizing their “influence” and minimizing their “hubris.”  As Maegen Nix of Johns Hopkins defined it, the latter attribute is “vulnerability as a result of arrogance, international resentment generated by unilateral forceful actions [that] reduces the likelihood of cooperation from others.”

Thus the emphasis was on diplomatic, economic, intelligence and other means that do not require killing people, or as the US military likes to call it, “kinetic action.”  According to a workbook distributed to players, goals included:

The grey cell granted or denied permission to the main players to take certain actions; the cell also threw in curve balls to force players to react to unexpected developments. A “white cell” of computer geeks managed the mechanics of the game, whose full analysis will be published in mid-September.

The grey cell was mostly comprised of non-military types, yet it was a retired US Marine general who played a pivotal role by convincing the rest of the cell to “go big” and look beyond a narrow focus on Syria.

“Sometimes US policy gets in the way of US policy,” quipped retired Major General Mastin Robeson, in promoting a wider regional accommodation that included Iran — despite the fact that the Barack Obama administration has sought to exclude the Islamic Republic from Syria diplomacy.

The Iran cell opened the way for the engagement. In the game, at any rate, the Tehran government was consumed more by a desire to preserve its interests in Syria than to rapidly achieve nuclear weapons — although it seemed to think it could do both.

“What I like is that we have now in the game a Congress of Vienna situation in the Middle East,” remarked Bernie Kaussler, a professor from James Madison University in Virginia and among the SMEs — military-speak for “subject matter expert” — invited. Kausler was referring to the early-19th century conference that redrew the map of Europe.

However, “actions” in the game were limited to the geographical area known as the Levant, comprising Syria, Lebanon, Turkey, Israel, the Palestinian areas and Jordan. That ruled out certain actions — for example, an Israeli or US military strike on Iran’s nuclear facilities.

The bias at the beginning was against any kind of US military intervention even in support of a Syrian safe haven. (In real life, the US has increased support for Syrian rebels but stopped short of providing arms.

In a talk to the entire group entitled “Why One and Probably Not the Other,” Stephanie Miley, the political adviser to the Supreme Allied Commander Europe, listed all the factors that led to NATO intervention in Libya but that argued against a similar operation in Syria.

As the game progressed, however, refugee flows and a loss of Syrian government control led Syrian rebels to “declare” an area in northwest Syria along the Turkish border as a safe haven. While many NATO members still wanted a UN Security Council resolution before they would undertake military action, Miley told the grey cell that by controlling territory, the rebels were satisfying a key condition for outside support. It was “a logical progression to get international recognition” even if Russia and China continued to veto a resolution endorsing a no-fly zone, she said.

Grey-cell members argued over whether economically strapped European governments would be able to afford another expensive military operation. The cell decided that Saudi Arabia and other oil-rich members of the Gulf Cooperation Council would pick up much of the tab and also send pilots to help patrol the zone.

The player cells took a variety of actions to try to bolster their positions. European authorities aggressively pursued and arrested Hezbollah financiers. Iran, Hezbollah and the Syrian regime built a covert base on the Mediterranean with help from North Korea and tried to send supplies to the base by ship through the Suez Canal. Iran incited Shiite Muslims in Yemen, Bahrain and eastern Saudi Arabia to distract attention from the Sunni Syrian rebels. All sides mounted “information campaigns,” with Syria inviting Russian and Chinese journalists and trying to convince them that the rebels were all terrorists, while the US got Algeria to denigrate Iran and Hezbollah.

Much of the action dealt with getting disparate parts of the US government to work together — coordination hampered by the fact that civilian and military employees of the US government at the conference frequently did not understand each other’s acronyms. That led John Limbert, a former US Deputy Secretary of State for Iran, to ask at one point whether the purpose of the game was “to deal with [US] bureaucratic issues or national security issues.”

Goldner conceded the ambition of the exercise, telling participants, “We’re cramming 20 pounds of stuff into a two-and-a-half-pound bag.”

It was left to Gideon Avidor, a retired brigadier general from the Israeli Defense Forces, to take the longer, philosophical view.

In a region with 5,000 years of recorded history, he told the players, “One doesn’t have to solve all the problems today. Leave some problems to the next generation.”

Barbara Slavin is Washington correspondent for Al-Monitor and a senior fellow at the Atlantic Council, where she focuses on Iran. She took part in the “competitive influence game” as a member of the “grey cell.” She tweets at BarbaraSlavin1.