US Devises 'Influence Games' For Working with Syria, Levant

The US Army's Asymmetric Warfare Group wants a better grasp of  its vulnerabilities, those of its adversaries and the consequences of US actions. Barbara Slavin reports on the body''s "competitive influence" game that will focus on the crisis in Syria. “You can tie every threat group around the world to the Levant,” said one participant. 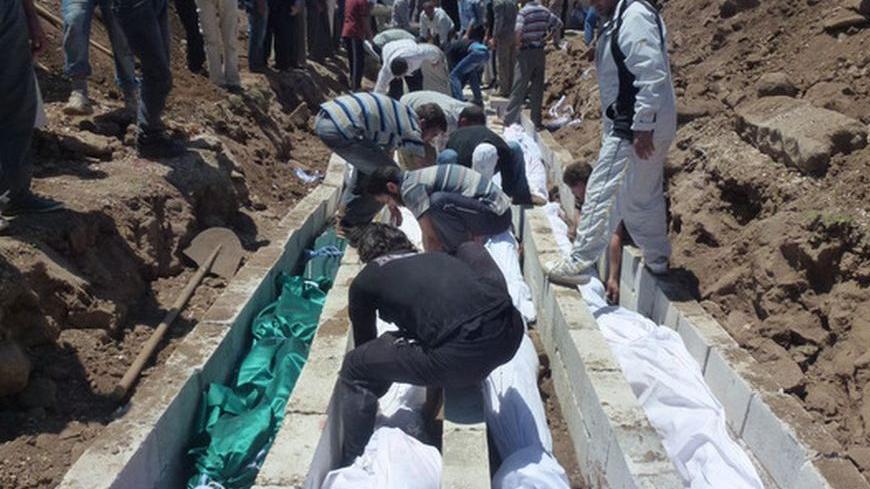 People gather at a mass burial for the victims purportedly killed during an artillery barrage from Syrian forces in Houla. - REUTERS/Shaam News Network/Handout

When is a war game not a war game? When it is a “competitive influence” game.

For three days earlier this month (May 15-17), more than 100 people met in Annapolis, Md. to brainstorm about devising such an exercise. The actual game is to be played this summer at an air base in Florida.

If current trends hold, the focus will be on the crisis unfolding around the regime of Bashar al-Assad in Syria. Experts will represent the players, who will include Syria’s neighbors, the United States, NATO and other interested parties such as Russia and Iran that might impact Syrian events and be affected by them in return.

Surprised all too often by nominally less well-equipped adversaries in Afghanistan and Iraq, the US military wants to know more about what it is getting into before it has to fight another war. It especially wants to know if there are non-military ways of dealing with crises.

In 2006, the US Army established an Asymmetric Warfare Group (AWG) to deal with such contingencies. The AWG then developed the Asymmetric Operations Working Group (AOWG) with support from the Johns Hopkins University Applied Physics Laboratory.[i] The latter group has published six studies on so-called “complex threats” ranging from al-Qaeda to piracy and terrorism in the Horn of Africa.

The groups include civilian analysts as well as on-the-ground “practitioners” — judging from the number of barrel-chested men at this month’s “immersion seminar” who had biceps the circumference of normal people’s thighs.

For someone who has not spent much time in the Pentagon or on battlefields, the seminar was in itself an exercise in intercultural dialog. Acronyms bombarded the participants and were at times unintelligible to different branches of the US government.

By the end, however, everyone appeared to understand what Col. Patrick J. Mahaney Jr., the commander of AWG, meant when he said that “the next battle might not be a battle. It might be a NEO or a MARO.”

A “NEO” is a Noncombatant Evacuation Operation in which the State Department and US forces rescue Americans and other third-country nationals stranded in a crisis zone. That could well become necessary if the situation in Syria continues to deteriorate.[ii]

A “MARO” is a Mass Atrocity Response Operation.

At least 10,000 people have died in Syria in the past 15 months but the death toll has come in increments of a few dozen a day. No one at the conference said how many Syrians would have to die at one time — or be threatened with death — to qualify as a “mass atrocity” prompting US action.

One focus at the AOWG event was the “seams” between various US commands, departments and agencies that need to be stitched more closely together for maximum effectiveness.

For example, US European Command (EUCOM) would likely be drawn into a NEO or a MARO even though Syria and Lebanon are in the area of responsibility of US Central Command, whose bases are located around the Persian Gulf and in Afghanistan. (EUCOM’s area includes Turkey and Israel as well as the Mediterranean Sea.)

A number of US combatant commands and agencies would also be engaged if the Barack Obama administration decides to create a no-fly zone or humanitarian corridor in Syria for refugees. And there is the possibility of wider US military involvement in support of the Syrian opposition.

Throughout the seminar, the organizers stressed that while one aim is to be ready for military challenges, an equally if not more important goal is to identify other elements of US and allied influence.

Of course, there is an acronym for this. DIME: Diplomacy, Intelligence-Information, Military, Economic.

Among issues discussed as the seminar split into smaller working groups was how to influence Lebanese Hezbollah to function more as a Lebanese political entity and less as a militant organization allied with Syria and Iran. One suggestion: allow US officials to meet with Hezbollah members of the Lebanese government.

A spokesman for a group working on mitigating negative Iranian influence in the Levant noted in its final presentation that “we did not see a lot of military solutions” and that diplomacy, law enforcement and collaboration with partners would likely work best.

While it appears unlikely that Assad can remain in power over the long term, a retired Iraqi general warned about the consequences of sudden regime change, noting that the US removal of Saddam Hussein had led to the mass exodus of Iraq’s educated classes and the collapse of a national identity beyond support for Iraq’s soccer team.

AWG — which is based at Fort Meade, Md. and includes about 200 active-duty military and about 100 civilian Defense Department employees and contractors — uses the AOWG to understand the vulnerabilities of adversaries. It also wants a better grasp of US vulnerabilities and of the consequences of US actions — or as Pentagon types put it, the “second and third-order effects” — resulting from various steps.

“The purpose of the game is less about finding solutions and more about gaining a deeper understanding of the problem set and the second and third-order effects that occur when certain actions are taken,” said Mastin Robeson, a retired US Marine Corps Major General who is advising the AOWG study of the Levant.

Or as the group’s literature says, AWG seeks to “increase situational knowledge, foster a collaborative approach and challenge assumptions” regarding “complex challenges.”

Asked how the region encompassing Syria and its neighbors was chosen for this year’s exercise, Lt. Col. Scott Crino of the AWG outlined the methodology used for choosing focus areas but said this decision was easy. “You can tie every threat group around the world to the Levant,” he said.

Barbara Slavin is Washington correspondent for Al-Monitor and a senior fellow at The Atlantic Council, where she focuses on Iran. She was among those invited to the seminar on the Levant. She tweets at BarbaraSlavin1.

[i] According to AOWG, the purpose of the group is “to provide a joint service, interagency, multi-national forum that meets periodically to share asymmetric operations perspectives to better understand vulnerabilities, while simultaneously developing methods to identify and defeat current and emerging asymmetric threats.”

[ii] AWG defines a NEO as an operation “conducted to assist the Department of State in evacuating US citizens, Department of Defense civilian personnel, and designated host nation and third country nationals who reside in foreign nations and lives are in danger in connection with hostile action. These individuals are evacuated to an appropriate safe haven (evacuation may also be conducted in anticipation of, or in response to, any natural or manmade disaster (DOD Joint Publication 3-68).