Exclusive: US, Egypt to Hold First Military Talks Since Revolt

US and Egyptian military leaders are preparing for the first formal cooperation talks since the last round was interrupted in January 2011 by the protests in Cairo’s Tahrir Square that ultimately toppled the country’s dictatorship, reports Viola Gienger. 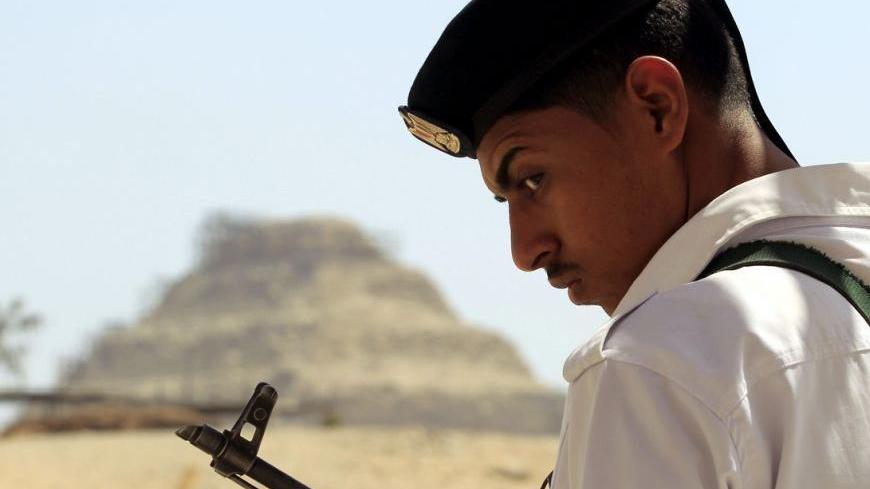 A soldier stands guard with his weapon at the main gate leading to the Saqqara or "Step" Pyramid, south of Cairo, Sept. 20, 2012. - REUTERS/Mohamed Abd El Ghany
October 3, 2012

WASHINGTON — US and Egyptian military leaders are preparing for the first formal cooperation talks since the last round was interrupted at the Pentagon in January 2011 by protests in Cairo’s Tahrir Square that ultimately toppled the country’s three-decade dictatorship.

The annual Egypt-US Military Cooperation Committee forum was cut short that January day, when the budding revolution prompted then-President Hosni Mubarak’s government to scramble the Egyptian delegation back to Cairo.

Official defense contacts have continued at the highest levels of both governments throughout the past 1½ years, sometimes filled with tension as the US side urged Egypt’s military leaders running the country to advance a democratic transition. Meantime, formal talks about the $1.3 billion in security aid the US provides Egypt each year were put on the back burner.

June’s election of President Mohammed Morsi and his quick replacement of the leadership of the Supreme Council of the Armed Forces that had managed the transition have paved the way for re-establishing regular formal talks.

"Planning is ongoing for the resumption of the MCC, as early as this fall," Navy Cmdr. Scott McIlnay, a US military spokesman, confirmed to Al-Monitor. Egyptian officials said the talks likely would be scheduled for sometime after the Nov. 6 elections.

The plan to revive discussions represents a desire by the US to quickly normalize military relations even as administration officials and members of Congress proceed warily with a new Egyptian government led by a president aligned with the Muslim Brotherhood.


US officials are quietly debating how to update military ties to reinforce civilian control of Egypt’s armed forces, advance democratic transparency in its finances and build a more modern approach to securing the country beyond Abrams tanks and fighter jets. Defense experts see a need to help Egypt more efficiently patrol its borders, modernize its Interior Ministry, conduct counterterrorism operations and combat the militancy that has thrown the sensitive Sinai Peninsula into chaos. The US provides the largest contingent in the Multinational Force and Observers peacekeeping mission on the peninsula.

At the same time, the US aims to protect Israel’s “qualitative military edge” in the region, and hold Egypt to its side of bargain in the 1979 Camp David Peace Accords. That means providing Egypt with the security aid it needs without creating a potential threat to Israel should relations sour with Egypt under the Muslim Brotherhood.

“We’ve long said Egypt needs to do several things, and the main thing is it needs to keep the democratic transition on track,’’ a State Department official told Al-Monitor. “Great strides have been made. More needs to be done.”

The question of aid to Egypt —how much, what kind and in what form — has become particularly prickly since demonstrators protesting in front of the US Embassy in Cairo last month scaled the compound walls and ripped down American flags. The failure of Egyptian authorities to prevent the breach and calm the protesters concerned and angered US officials so much that President Barack Obama called Morsi and subsequently told Telemundo in response to an interview question that he wouldn’t consider Egypt an ally. “But we don’t consider them an enemy,” he said.

Still, US officials including Secretary of State Hillary Clinton and Defense Secretary Leon Panetta have stressed the need to maintain relations with Egypt for its pivotal role in the region.

“There’s a strong desire on the part of the US. government to support civilian control in Egypt and sustain our close ties with the Egyptian military,” a US official told Al-Monitor. “We believe there’s a payoff for both sides in establishing a new normal.”

Most attention over aid to Egypt recently has been on as much as $1 billion of debt relief the US is considering. The Obama administration’s plan to expedite $450 million in emergency cash assistance to Egypt ran into a roadblock on Capitol Hill last week, when Rep. Kay Granger, a Texas Republican who chairs the House Appropriations subcommittee on foreign operations, placed a hold on the transfer.

"This proposal comes to Congress at a point when the US-Egypt relationship has never been under more scrutiny, and rightly so,” Granger said at the time. “I am not convinced of the urgent need for this assistance and I cannot support it at this time.”

Obama outlined a shift in US aspirations for assistance to the region in the wake of the Arab Spring during a May 2011 speech. In the past, US aims focused on counterterrorism, stopping the spread of nuclear weapons, encouraging commerce, securing the region, advancing the Arab-Israeli peace and guaranteeing Israel’s security.

While the US would continue those, the “failure to speak to the broader aspirations of ordinary people will only feed the suspicion that has festered for years that the United States pursues our own interests at their expense, “ Obama said.

“America’s support for democracy will therefore be based on ensuring financial stability, promoting reform and integrating competitive markets with each other and the global economy – starting with Tunisia and Egypt,” the president said.

Senate appropriations legislation intended but delayed for the fiscal year that started Oct. 1 gets specific on military assistance. The bill requires some of the funding to be used for border security in the Sinai, and that economic aid support “security sector reform.” It also requires that the Secretary of State certify that Egypt is implementing civilian control over the military and police and publicly disclosing those budgets, a step that might be a stretch this soon in the government’s transition to democratic rule.

Viola Gienger is an independent writer and editor. She is a former Bloomberg News defense and foreign-affairs reporter and tweets at @violagienger.