Congressional threats to cut assistance to Egypt threaten to erode an already fragile trust between Washington and Cairo, Egypt's defense attache in Washington tells Al-Monitor in an exclusive interview. 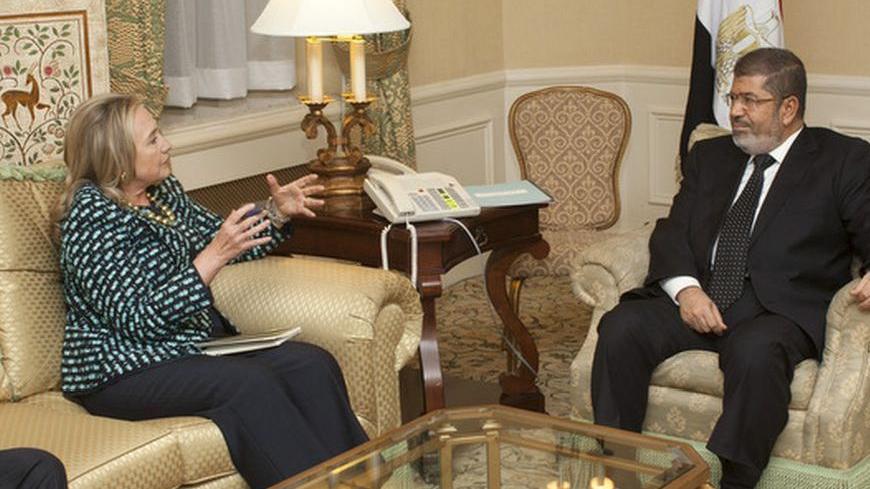 WASHINGTON — US congressional rhetoric and actions humiliate and frustrate Egypt’s leaders, the country’s defense attaché told Al-Monitor in an exclusive interview, adding that tensions threaten to erode an already fragile trust since the revolution.

“Every day we wake up in the morning and we see somebody from the Hill is threatening and they say we have to cut the aid, we have to hold the aid,” Maj. Gen. Mohamed Elkeshky said. “It hurts our dignity and our sovereignty. And you find the public opinion in Egypt also says it’s enough.”

President Barack Obama’s administration has sought to nurture productive relationships — and the potential influence that might come with them — in dealing with the new government of President Mohammed Morsi, who took office in June. At the same time, US officials have expressed caution over the Muslim Brotherhood’s intentions, and voiced outrage at incidents such as the prosecution of NGO workers and last month’s breach by protesters at the US Embassy in Cairo.

“There’s a strong desire on the part of the US. government to support civilian control in Egypt and sustain our close ties with the Egyptian military,’’ a senior US official told Al-Monitor. “We believe there’s a payoff for both sides in establishing a new normal.”

The US relies on Egypt to maintain a semblance of stability in the current revolutionary turmoil in the Middle East, starting with maintaining the commitment to the 1979 peace treaty with Israel. Egypt, in turn, needs US help to maintain its regional military might and bolster an economy devastated by the flight of investors and tourists during the unrest.

The World Bank estimates about a quarter of the country’s population of more than 82 million lives in poverty, and the International Monetary Fund reported in April that unemployment rose to 12.4% from 9% a year earlier. That makes economic assistance as critical as the $1.3 billion a year in US military aid.

“Our primary security threat is unemployment among the people,” said Elkeshky, who has served in his position in Washington for three years. “If Egypt will fail economically, all of the Middle East will be under threat for stability.”

In the absence of hired Washington lobbyists for Egypt, Elkeshky is among the country’s envoys who’ve been meeting with members of Congress and their staffs to persuade them to clear the Obama administration’s debt relief plan for $450 million of cash assistance. Representative Kay Granger, a Texas Republican who chairs the House Appropriations subcommittee on state and foreign operations, last month placed a hold on the aid in the aftermath of the attack on the US. Embassy in Cairo, saying, “I am not convinced of the urgent need for this assistance.”

House Foreign Affairs Committee Chairman Ileana Ros-Lehtinen also wrote Secretary of State Hillary Clinton to express concern over the aid plan, in a letter with with Ohio Rep. Jim Jordan, chairman of the House Republican Study Committee. “Is it the administration’s intent to enable the Muslim Brotherhood’s consolidation of power within Egypt?’’ Ros-Lehtinen, R-Fla., said in the Oct. 4 letter. “How would providing this assistance not enable their consolidation of power?”

House staffers say the lawmakers’ reservations are focused on the civilian leadership’s ties to the Muslim Brotherhood rather than the military officials who lead the Supreme Council of the Armed Forces.

Still, the atmosphere in talks over economic aid may spill over to affect military ties.

Morsi in August replaced the chairman of the council, who serves as the defense minister, and the army chief of staff in an early demonstration that he intends to be in charge. The council had essentially run the country in the interim between former dictator Hosni Mubarak’s ouster in 2011 and Morsi’s election, and its officials frequently said they want to retreat from politics as soon as civilian leaders are elected.

In a 90-minute interview, Elkeshky used the word “friend” at least six times to capture his aspirations for ties with the US.

“I need them to consider this relationship as a partnership,” he said. “We are equal, all, and we have to respect each other, and the friend has to stand beside his friend when he’s facing some challenges.

Relations between the two countries during the transition are bound to hit “bumps in the road,” the US official said. The administration aims to encourage the Egyptians to demonstrate civilian control and transparency in military spending. The Pentagon also wants Egypt to accept help in modernizing its approach to security in flash points like the Sinai Peninsula.

Elkeshky, who has served as defense attaché in Washington for three years, signaled the potential for disagreement on that score, giving a robust defense of the Egyptian military’s sophistication and its existing process for civilian review of the budget.

Since Parliament is intended to represent the people, he said: “We hide nothing.”

He resisted the idea of divesting some of the military’s vast commercial holdings, including real estate and producers of milk, cheese, macaroni and chicken, saying the system is intended to provide stable supplies for soldiers without burdening the civilian sector.

On security in a stretch of the Sinai that has been overrun with smugglers and what he described as prisoners who escaped in last year’s revolutionary upheaval, Egypt is negotiating with the US for technology to assist in the fight, he said. Egypt won’t accept foreign advisers on the ground, though, considering it a breach of the country’s sovereignty.

Because military aid discussions have been primarily the purview of the generals on the Egyptian side in the past, any change will take time, said Michele Dunne, an Egypt expert who directs the Atlantic Council policy research group’s Rafik Hariri Center for the Middle East in Washington.

“It becomes a whole new conversation,’’ Dunne said. One test will be what Egypt’s constitution, which is currently being drafted, says about civilian authority over the military, she said.

“Civilian control of the military is not going to emerge overnight,’’ she said.

In the meantime, top State Department officials have sought to answer questions from members of Congress to proceed with granting the economic relief Egypt needs, including an Oct. 9 phone call between Granger and Deputy Secretary of State Thomas Nides, department spokeswoman Victoria Nuland told reporters that day.

"We feel very strongly that now is not the time to pull back from supporting these fragile democracies in North Africa and the Middle East,’’ Nuland said. “It’s time to support those who are trying to take their countries in a democratic direction.”

Viola Gienger is an independent writer and editor. She is a former Bloomberg News defense and foreign-affairs reporter and tweets at @violagienger.