US Authorizes Financial Support For the Free Syrian Army

The US government granted the Syrian Support Group, an organization that supports the Free Syrian Army, authority to provide financial and logistical support to the armed Syrian resistance. Al-Monitor's Laura Rozen talks to the group's Washington agent about using the assistance for weapons, equipment and even salaries. 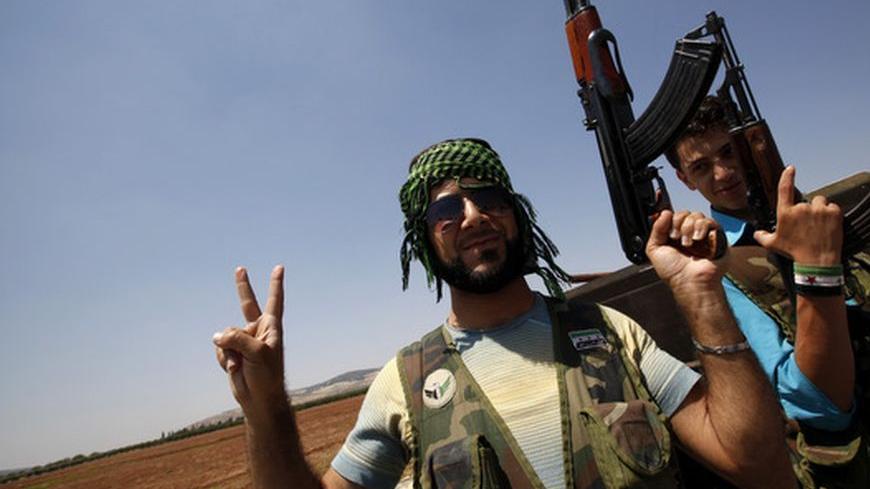 A US group that supports the Free Syrian Army has received a waiver from the US Treasury Department authorizing it to provide logistical and financial support to the armed Syrian resistance.

The waiver was received from the Treasury Department Office of Foreign Asset Control (OFAC) last week, Brian Sayers, of the Syrian Support Group, told Al- Monitor in an interview Friday.

“The OFAC decision is huge,” Sayers said. “It gets us the leeway to support the Free Syrian Army in broad terms.”

The Syrian Support Group hired Sayers, who previously spent six years working in NATO operations in Brussels and Kosovo, four months ago to be the Washington agent for the group.

With backers from the Syrian exile community in the United States and Canada, the Syrian Support Group's goal “has always been to support the Free Syrian Army in different ways,” Sayers said.

In the constellation of Syrian opposition and exile organizations and personalities, the Syrian Support Group “sees its niche as to provide direct support for the FSA, and to stand up the Free Syrian Army as the future Syrian Army,” he explained. “That requires both short term things — financial operations, logistics support, communications— but also long-term support: security sector reform, a training doctrine.”

In the near-term, the "OFAC letter allows for providing financial, communications and logistics support to the FSA,” Sayers said. That could include paying for FSA salaries and provisions, as well as “communications equipment, satellite imagery, paying for satellite imagery, logistical support for transport, which could mean everything from buying a 4x4 to supporting someone’s travel to Turkey.”

On their more intermediate term wish-list, “our ask is intelligence support, drone support, eyes in the sky, an intelligence platform,” Sayers said. Syria’s rebels “need both intelligence and weapons,” as they seek to carve out and protect safe areas on the ground in Syria, and try to secure the defection of more members of the Syrian military.

Indeed, one Syrian source, speaking anonymously, suggested the Syrian Support Group’s mission is not only about lobbying the US government to provide support to the FSA, but also the reverse: to help turn the FSA into a more organized entity that could receive intelligence and other assistance from Western security agencies.

The FSA has formed a nine-member military council, comprised of the commanders from 10 of Syria’s provinces. Although they have previously operated in a more decentralized manner, the Free Syrian Army commanders have recently increased their coordination, including holding conference calls almost daily, Sayers said.

This past week, all nine members of the Free Syrian Army military council signed  a previously unpublished "Proclamation of Principles," pledging to respect democracy, multi-ethnic and sectarian pluralism, and the authority of Syria’s future, elected, civilian leadership. “We believe in a free and democratic Syria where all Syrian citizens, regardless of their ethnicity, creed, religion or class shall enjoy equal rights and live in liberty, justice and peace,” the document reads. “We will do our utmost to uphold international humanitarian law and norms, including by treating prisoners humanely, even as the Assad regime engages in crimes against humanity.”

However, one figure the FSA is unlikely to support as a Syrian opposition unity leader is the recently defected Gen. Manaf Tlas, who arrived in Turkey on Thursday. Reports this week have suggested the US is eyeing Tlas, formerly a close friend of Bashar al-Assad and the son of Hafez al-Assad’s Defense Minister, for that role.

But Sayers said, in his opinion, the US government has not decided yet.

“In our briefings [with US officials], we get asked what do we think of the guy. I think they are asking us to try to get more information. They have not made up their mind,” he said.

Tlas had considerable means at his disposal to facilitate his defection, Sayers said, including being able to get his family safely out ahead of time. But Tlas and his father are seen as having been too close for too long to the Assad  regime, and would have little support among Syria’s rebels, he suggested.

“A Chalabi would be the last thing you want,” Sayers said, referring to the Iraqi exile, Ahmad Chalabi, who wooed American neo-conservatives to overthrow Saddam Hussein only to turn out to have no base of support in Iraq. “Nobody wants that.”