US Courts Emerging Leaders in Syria to Avoid Iraq Pitfalls

As the US scrambles to establish ties with the Syrian opposition, it's also trying hard to avoid an exile-centric strategy that risks repeating the debacle of Iraq, write Al-Monitor's Barbara Slavin and Laura Rozen. Still, on the heels of Kofi Annan's resignation as UN envoy to Syria, some insiders wonder if a transition plan will make any difference. 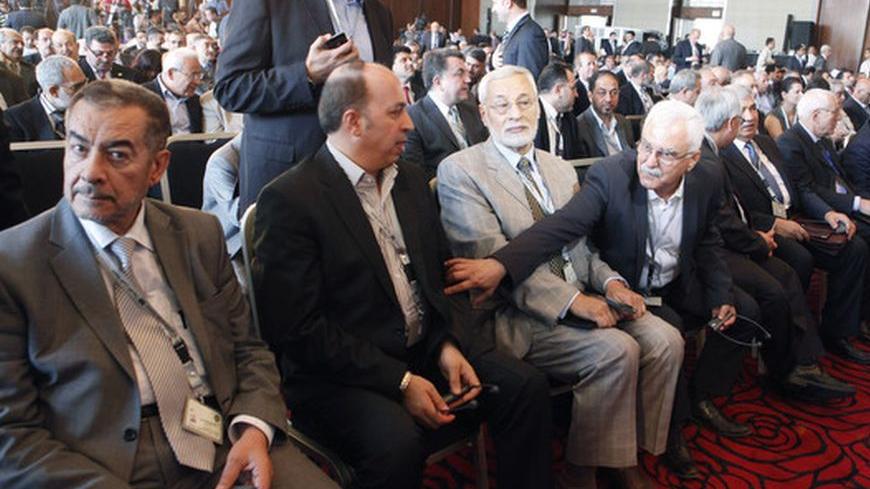 As the United States scrambles to establish ties with emerging leaders in the Syrian opposition, President Barack Obama's administration is trying hard to avoid an exile-centric strategy that risks repeating the debacle of Iraq.

Steven Heydemann, a Middle East expert at the US Institute of Peace (USIP), who at the behest of the administration has been working with Syrian opposition figures for 10 months on a “day after” strategy for Syria, told Al-Monitor that Syrians active in the fight against Syrian President Bashar al-Assad's regime have been able to join in discussions outside the country about a political transition. That includes a conference Heydemann attended this week in Cairo.

“There is an enormous effort underway to engage people within Syria,” he said.

Unlike the situation in Iraq, when the former President George W. Bush's administration relied on  long-time Iraqi exiles such as Ahmed Chalabi — self-promoters with their own political and financial agendas — to dictate the shape of a new iraqi government, the US has other options in Syria, Heydemann said. These involve direct consultations with those who are in the thick of the rebellion against the Assad regime.

“You’d be amazed at how many [members of the opposition] are moving back and forth across the border with Turkey,” Heydemann said, as the rebels take control of more and more territory within Syria and control border posts.

There is general consensus in Washington that the chances for a political solution to the Syrian conflict have dwindled and that the leaders of a post-Assad Syria will emerge from those who survive the fierce battles going on now.

A final nail in the coffin of a negotiated transition came Thursday when United Nations and Arab League Syria envoy Kofi Annan resigned. UN Secretary General Ban Ki Moon expressed regret but noted that the Syrian government and opposition are relying “on ever-increasing violence” and that there have been “persistent divisions within the Security Council,” a reference to Russian vetoes of resolutions endorsing foreign intervention on the side of the rebels.

Andrew Tabler, a Syria expert at the Washington Institute for Near East Policy who embarks later this week on a month-long trip to the region, said it was also possible to conduct “meetings” with opposition leaders within Syria thanks to Skype and other technological advances not available in the past.

The US government has “spent a lot of money so these people have good Internet access,” Tabler told Al-Monitor on Thursday.

State Department Syria envoy Fred Hof and Mounir Ibrahim, a deputy to US Ambassador to Syria Robert Ford, are also traveling almost constantly in the region to meet with a range of Syrian opposition representatives and defectors.

The USIP-convened group “has made strenuous efforts to include as many members of the opposition as possible,” said Sasha Ghosh-Siminoff, a US activist with the Syria Emergency Task Force. He said he is in close touch with Syrian opposition activists in the Idlib and Aleppo regions, where he lived in 2011. The US is “banking on [the USIP transition] plan, it’s the most unified, comprehensive effort to date to lay the groundwork for whatever comes after,” Ghosh-Siminoff told Al-Monitor on Wednesday.

Some observers have been underwhelmed by the caliber of the opposition and by its seeming inability to unify around an acceptable post-Assad vision.

David Pollock, a former State Department official now at the Washington Institute for Near East Policy, returned recently from a trip to Turkey where he met over 100 Syrian opposition figures. He wrote that his interlocutors tried hard to stab each other in the proverbial back even as they competed for outside support.

At the Cairo meeting, an 81-year-old human rights activist, Haytham al-Maleh, declared on Tuesday that he had been “tasked with leading a transitional government” and would begin consultations “with the opposition inside and outside” the country, according to Agence France Presse. This was immediately challenged by Abdelbasset Seida of the Syrian National Council, the best known exile group, and also by a leader of the Free Syrian Army, which claims to be directing the fight against Assad and is based in Turkey.

James Dobbins, a former US diplomat with extensive experience in post-conflict transitions, told a Senate Foreign Relations Committee hearing Wednesday  that while “the new Syrian leadership will be formed in the crucible of war,” the US should be doing everything possible to contact those who might emerge.

More important than drafting plans [for the ultimate transition] is to forge relationships,” he said.

Daniel Serwer, another veteran of US post-conflict diplomacy, told Al-Monitor that those with the best knowledge of local leaders and members of the regime who might be redeemable are the UN monitors who are in the process of leaving Syria. “It’s a mistake to take them out,” Serwer said.

The Obama administration has been sticking its toe deeper and deeper into the Syrian rebellion since a dramatic bombing in Damascus killed several top members of the regime, including Assad’s brother–in-law and defense minister. As fighting now continues to rage in Aleppo, Syria’s commercial capital and largest city, Assad’s days in power seem to be dwindling. US officials are concerned about the prospects for prolonged sectarian warfare and about the fate of Syria’s arsenal of chemical weapons.

American officials have been revealing more details about the Syria transition planning as well as their increasing contacts with Syria’s armed resistance. The Treasury Department last week acknowledged that it has granted a waiver for a US group to provide non-lethal financial and logistical assistance to the Free Syrian Army, as first reported by Al-Monitor.

“We’ve said all along that we were ready and willing and beginning to provide nonlethal support to the Syrian opposition,” State Department spokeswoman Victoria Nuland told journalists at the State Department press briefing July 30. “As that support has been absorbed, we’ve been increasing the amount of nonlethal support that we’ve been providing...So we will be continuing to expand what we do in a nonlethal context to help the opposition be more united, to be more organized.”

A transition plan put forward by the Syrian opposition in Cairo “includes a first transition government and then one that results from a broader national meeting, leading to elections,” Nuland said. “They’ve also spoken about their willingness to include some technocrats who don’t have blood on their hands from the Assad regime.”

However, the ability of the US to shape the outcome remains doubtful and there is bipartisan caution in Washington about military intervention even as the US Army tries to anticipate what will happen in Syria.

It takes a long time to set up relationships with people,” Tabler told Al-Monitor, adding that in Syria “we didn’t start early enough.”

Heydemann acknowledged that “there is a possibility that none of this [planning for a transition] will make any difference.”