US risks irrelevance in Syria with reconstruction taboos

The West’s warranted aversion to helping the Assad regime carries risks for the entire region. 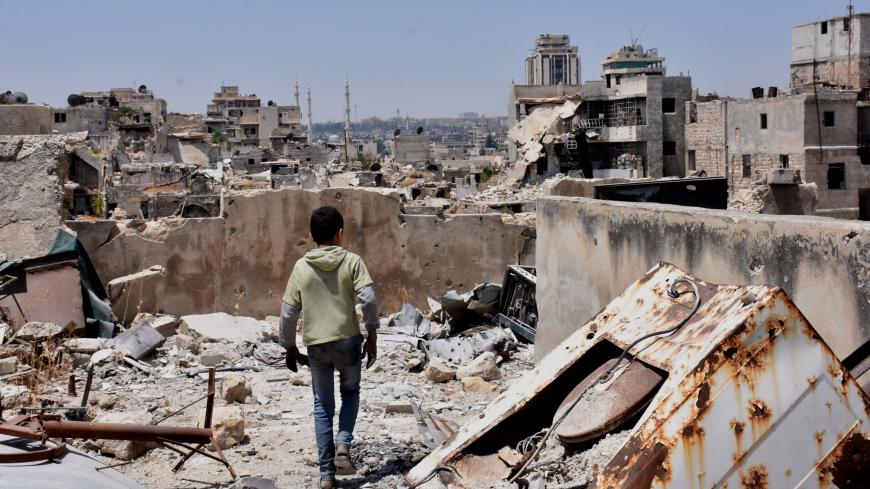 A Syrian boy walks amid the rubble of destroyed buildings in the northern city of Aleppo, Syria, July 22, 2017. - GEORGE OURFALIAN/AFP/Getty Images

After seven years of war, Syria’s reconstruction needs are truly daunting. More than half of the country’s hospitals and two out of three schools have been damaged or destroyed and more than a quarter of all homes are in need of repairs.

The price tag to rebuild the country, according to United Nations Special Envoy for Syria Staffan de Mistura, is a hefty $250 billion. While these costs have mounted, Syria has seen its economy dwindle by an equivalent amount since the start of the conflict.

And still the conflict rages on, causing more death, destruction and despair by the day. With no apparent path to victory for the Western-backed opposition, multilateral donors are staying on the sidelines, scared off by international sanctions and the ongoing global dispute over the future of President Bashar al-Assad and his blood-soaked regime.

Having invested heavily in the failed rebellion, Assad's chief foes — the United States, Europe and the Gulf countries — are understandably wary of making a 180-degree turn and lending him a helping hand. But staying away, some economic and regional experts warn, could well prove worse not only for Syria, but for the region and the rest of the world as well.

“At its base, the issue is: Do we want to stabilize Syria,” James Dobbins, a former US ambassador to the European Union under President George H.W. Bush, told Al-Monitor. “If that’s the objective, then being willing under some conditions to engage in — or at least allow our partners to engage in — reconstruction activities across the country is an important piece of leverage. In fact, it’s virtually our only piece of leverage.”

Despite ongoing internal debates on the best way forward in Syria, the West for now remains publicly committed to freezing out Assad.

US Secretary of State Rex Tillerson laid out the Donald Trump administration's policy during a speech at Stanford University’s Hoover Institution on Jan. 17. “We will discourage economic relationships between the Assad regime and any other country,” Tillerson said. “Once Assad is gone from power, the United States will gladly encourage the normalization of economic relationships between Syria and other nations.”

Congress has also weighed in, with 13 members of both parties signing onto the bluntly named “No Assistance for Assad Act.” The bill, introduced by ranking House Foreign Affairs Committee Democrat Eliot Engel of New York and endorsed by Chairman Ed Royce, R-Calif., hamstrings nonhumanitarian assistance to Assad-controlled areas. The committee is expected to vote on it March 15.

“We cannot and must not allocate any resources to the brutal Assad regime in reconstructing what he has destroyed,” bill co-sponsor and anti-Assad Syria caucus co-chairman Adam Kinzinger, R-Ill., said in a statement.

The European Union has echoed the sentiment, notably in its March 2017 European Council Syria strategy document that “reiterates” that the Europeans “will be ready to assist in the reconstruction of Syria only when a comprehensive, genuine and inclusive political transition … is firmly under way.” As recently as December, EU foreign policy chief Federica Mogherini told The New York Times that European rebuilding efforts “will start only when the political transition will be agreed on [at UN-backed peace talks] in Geneva.”

Beyond the current warnings, the United States and Europe have long had sanctions in place against Syria, including US prohibitions on new investments in the country. As a result, key international financial institutions including the World Bank have put Syria reconstruction plans on ice, even as they warn of the toll of delaying reconstruction.

“The more the conflict persists,” read a July 2017 World Bank report on the toll of war, “the deeper will run the grievances and divisions in Syrian society, rendering it very difficult to reinstate efficient institutions and economic mechanisms.”

While some American hawks are openly advocating for perpetual war in Syria to “keep bleeding” Assad regime ally Iran — with nary a thought for the cost to the civilian population — others have made a moral argument for keeping the regime at arm's length.

“A top-down approach to reconstruction would be a near total waste of grant, loan and investment money,” argues a December 2017 report from the Atlantic Council’s Rafik Hariri Center for the Middle East. “The regime’s corruption and incompetence are established beyond debate, and the political economy built by the regime laid the ground for the uprising that began in March 2011.”

Instead, the study authors propose to focus rebuilding efforts on areas outside government control, particularly in Kurdish-held parts of the country.

While attractive to Western donors, such an approach would do little for Syria's devastated urban heart along the Mediterranean coast. Aleppo and Homs, the country's second- and third-largest cities, for example, sit squarely in territory now controlled by the regime.

Furthermore, many areas outside the reach of Damascus remain inherently unstable as warring factions and their foreign patrons continue to compete for power. Barely a month after the Atlantic Council issued its report, Turkish forces invaded northwestern Syria to return the Kurdish enclave in Afrin back to Arab control.

Opposition setbacks have led some experts to conclude that Western powers should hold their noses and work with Assad in some capacity. The RAND Corporation, a think tank that advises the US government, has issued several reports on the issue, with slightly different conclusions.

One such report issued shortly after the government recaptured Aleppo in late 2016 argued for supporting centralized state institutions in post-conflict planning given the country's political culture and modern history.

“Policies that seek to divide the country or deliberately or inadvertently weaken or destabilize state institutions — such as support for armed groups that carry out attacks against the state or post-conflict governance and reconstruction plans that overemphasize local governance at the expense of the state — may ultimately prove counterproductive in preventing a return to conflict and violence,” the authors write.

Another 2017 RAND study, this one co-authored by Dobbins, argues for using the promise of reconstruction assistance through the United Nations, World Bank, International Monetary Fund and other multilateral institutions as leverage for the Syrian regime to allow some level of local democracy. Communal councils, called for in the constitution but never formed, could help prioritize aid needs and kickstart decentralized governance. 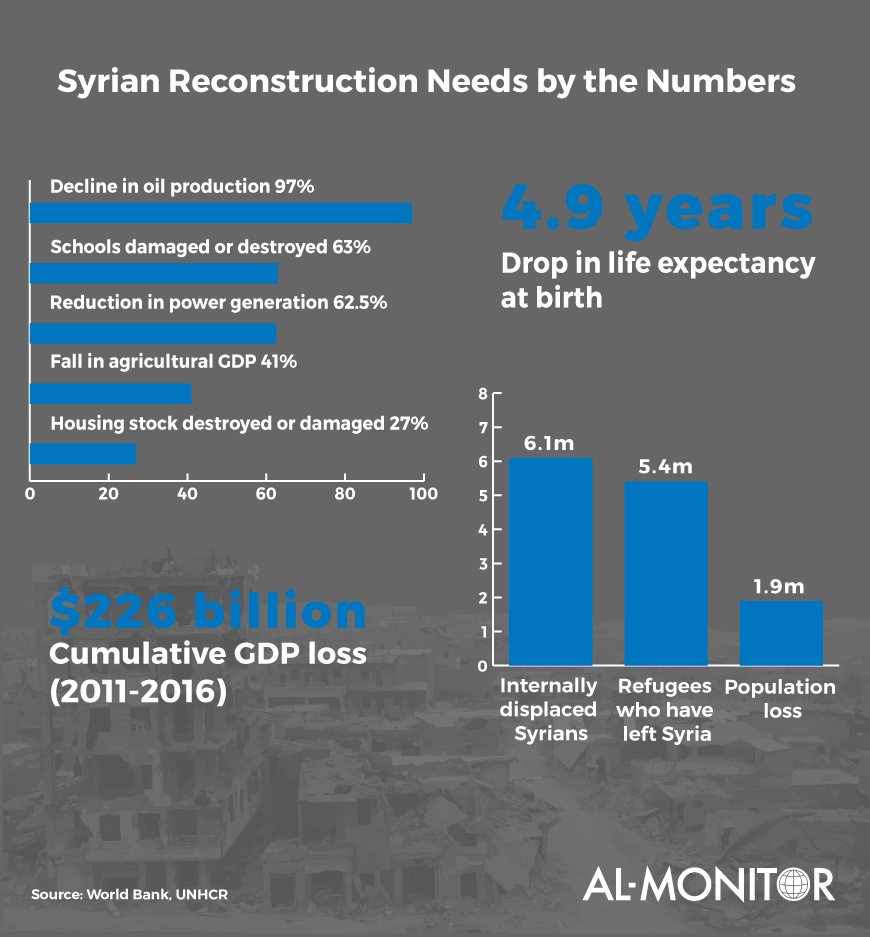 “There’s a case to be made for promoting some degree of grassroots democratization,” said Dobbins, who holds the Distinguished Chair in Diplomacy and Security at RAND. “I’m not sure how far the regime would permit that to evolve, but offering reconstruction on that basis would give them an incentive to do so.”

Boycotting reconstruction, he argues, would only strengthen US foes such as Iran and Russia — the main countries currently contemplating investments in Assad regime areas along with China.

“As long as the civil war continues, Russia and Iran are essential to Assad and his regime and have maximum leverage,” Dobbins said. “If the war is over, they’re no longer essential … and the regime will be looking for ways to diminish their influence and to regain some degree of autonomy.”

That's where the United States and other Western powers can play a productive role, he argues. Abandoning the field to Iran and Russia, by contrast, would only further distort Syria's inequitable economic system.

“I think what you’d see in the case in Russia is a sort of crony capitalism in which individuals connected to the Russian regime would have privileged positions and further prey on Syria,” Dobbins told Al-Monitor. “In the case of Iran it would probably be institutions connected to the [Islamic Revolutionary] Guard.”

And the impact of leaving major cities such as Aleppo in ruins goes far beyond Syria. Millions of refugees will continue to strain their already unstable neighbors' resources until they can return home, while Syria's economic woes create ripple effects throughout the region.

Trade statistics depict the Middle East as one of the world's least commercially integrated regions, but such figures are distorted by oil and gas sales to the outside world and a thriving black market. Rather than the official 9% figure for intra-Arab trade, the real figure when oil is taken out of the equation may be closer to 60%, according to Abdullah al-Dardari, who served as Syria's minister of planning and deputy prime minister for economic affairs before the 2011 uprising.

“The region is much more integrated than we think it is,” Dardari, now a senior adviser on reconstruction for the Middle East and North Africa division at the World Bank, said at a Middle East Institute (MEI) event on regional cooperation last week. “And therefore integration is the only way forward.”

The benefits for Syria are obvious: Rebuilding Aleppo's destroyed 1,000-megawatt power plant would take five to six years, Dardari argues, but hooking up to the Turkish electricity network across the border would cost about $5 million. Likewise, the region's surplus cement production is an obvious source for the millions of tons of concrete that Syria and Iraq need to rebuild.

Iraq in particular is pushing for closer regional ties after the violence of recent years. Under MEI's auspices in December, participants from nine countries including Syria and Iraq signed a declaration of good neighborhood principles for the Middle East that notably champions “convergence of regional infrastructures, regulations and policies.”

Trade between Syria and Iraq reached $5 billion a year in 2010, he said. And Mosul in particular, which was liberated from the Islamic State (IS) last summer at great cost in Iraqi blood and US treasure, is joined at the hip with Aleppo as the only two large regional cities that flourished as neither political capitals nor religious centers.

“Any reconstruction of those two cities needs to consider that past looking into the future,” Dardari said.

Fellow MEI panelist Naufel al-Hassan, the visiting deputy chief of staff to Iraqi Prime Minister Haider al-Abadi, said concerns about Syrian instability have been shared with the Trump administration. He said Iraq was relatively stable in 2011 before war broke out next door, fueling the rise of IS.

“Traditionally there is a lot of tribal and society integration,” Hassan told Al-Monitor. “I cannot imagine 10 years from now a stable city if the other side of the [Euphrates] river isn't safe.”