Pressure Mounts on Russia To Switch Horses in Syria

Russia won't give up its alliance with Syria, writes Barbara Slavin, but it may be convinced to detach from Syrian President Bashar al-Assad. While the Houla massacre didn't horrify Russian President Vladimir Putin as much as the West, it did raise stakes as the clock runs down on UN monitors and Ramadan approaches. 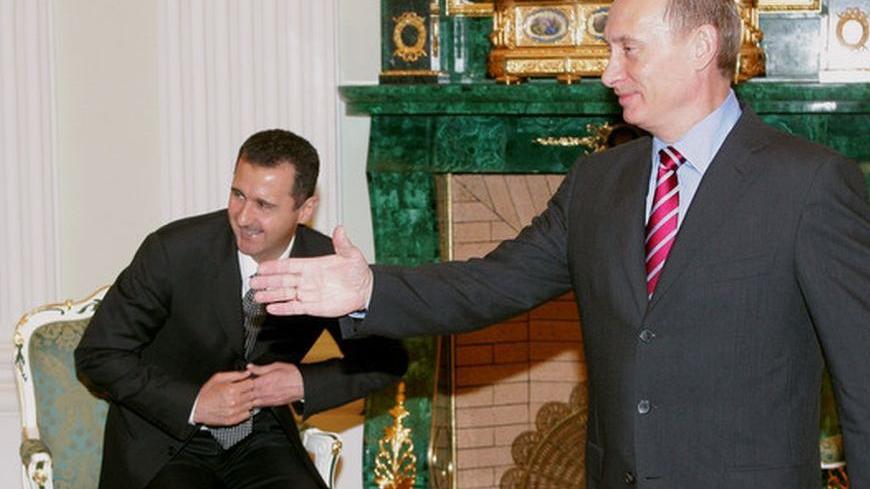 The US, Europe and Arab nations are mounting a concerted effort to convince Russia that it can maintain its alliance with Syria without Bashar al-Assad at the helm.

“There is no chance to detach Russia from Syria,” a senior Western diplomat in Washington, speaking on condition of anonymity, said Monday [June 4], referring to Russia’s long alliance with Syria.

This line of argument has been strengthened in the aftermath of the massacre last month [May 25] of more than 100 people, many of them children, in the village of Houla, but it is not yet clear whether Russia is convinced.

Asked if he detected any Russian movement away from Assad, State Department spokesman Mark Toner said Monday that “we would certainly hope that the Russians’ position is evolving regarding the opposition and regarding their ability to successfully lead a political transition. That’s where we want to get at.”

There has been much talk in Washington in recent months of a “Yemen” solution for Syria that would have Assad step down in favor of a transitional leader such as Vice President Farouk as-Sharaa — similar to Yemeni leader Abdullah Ali Saleh’s resignation in favor of his number two. Much of the Syrian regime would stay but the Assad family and its close relatives would leave power — and presumably the country — during a transition to a more representative government.

Speaking in Sweden on Sunday [June 3], Secretary of State Hillary Clinton said she has been telling her Russian counterpart, Sergei Lavrov, that “we all have to intensify our efforts to achieve a political transition, and Russia has to be at the table helping that to occur …

“Assad’s departure does not have to be a precondition, but it should be an outcome so that the people of Syria have a chance to express themselves,” Clinton said.  “In my conversations with Foreign Minister Lavrov he himself has referred to the Yemen example. And it took a lot of time and effort with a number of countries who were involved at the table, working to achieve a political transition. And we would like to see the same occur in Syria.”

The pan-Arab newspaper Al-Hayat, reporting June 3 about a meeting between Putin and newly elected French President François Hollande, quoted a French diplomat as saying that Hollande promised that in return for Russia facilitating Assad’s departure, France would “treat them as partners in the post-regime era.”

Unless Assad goes, the diplomat said, the situation in Syria would continue to deteriorate to the advantage of extremists who would not serve Russian interests.

Pressure is also growing from the Arab League. On Saturday [June 2] at a meeting in Qatar, Qatar’s Prime Minister Sheikh Hamad bin Jassim Al-Thani, the head of the Arab League committee on Syria, said the League wants the UN Security Council to pass a resolution on the crisis under Chapter VII of the UN charter, which would define the situation in Syria as a threat to international peace and security. This would open the way to more forceful UN action, including external military intervention.

Experts on Russia and the Middle East said they doubted that Russia was ready to dump Assad even though his regime has killed far more people in less time than the Saleh government in Yemen did before it fell.

“I don’t think we’re there yet,” Mark Katz, a Russia expert at George Mason University in Virginia, told Al-Monitor. “[The Russians] won’t switch until Assad is on the run.”

Katz noted in a recent blog post that Putin “does not share Western outrage over the killing of large numbers of civilians, but sees this as just part of the cost of defeating armed opponents.”

The United Nations now estimates that more than 10,000 people have died since the uprising against Assad erupted in March 2011.

Andrew Tabler, a Syria expert at The Washington Institute of Near East Policy, also said he had seen “no concrete evidence” that Russia was seriously weighing replacing Assad. However, Tabler said he could envision Russia backing Alawite generals in the Syrian army against Assad if the situation on the ground continues to deteriorate.

“There has been whispering in policy circles that the Russians have assets in the [Syrian] military circles they can count on,” Tabler said.

The Houla massacre has raised the stakes.

“The pressure [for intervention] is stronger in Europe than it is in the United States,” the Western diplomat said. “The convergences [with Bosnia in the 90s] are striking.”

He was referring to the war in the former Yugoslavia where massacres of civilians eventually led to foreign military and diplomatic intervention. Russia participated in US-brokered talks in Dayton, Ohio that pressured Russia’s ally, Serbia, to agree to a settlement in the former Yugoslav republic of Bosnia in 1995.

A former US official in Washington, speaking on condition of anonymity, said a “quartet” comprising the US, UN, European Union and Russia might have a better chance of negotiating a resolution to the Syria crisis than the so-far failed mission of former UN Secretary Kofi Annan.

Annan, who is to brief the UN Security Council on Thursday and see Clinton in Washington on Friday, has expressed growing frustration with his inability to broker a settlement. A UN monitoring mission that has deployed a few hundred monitors to Syria but failed to stop the violence is due to expire on July 19 — which is also the beginning of Ramadan, when religious feelings against the Assad regime are likely to be accentuated.

The deadline should concentrate minds, Tabler said, but added, “my guess is that the Russians will be very incremental. Meanwhile we are hurtling toward Ramadan,” when the level of violence is only likely to increase.