President Abdullah Gul approved a controversial reform bill that would allow optional Koran courses for children in school last month. The bill is being seen as a political tool for the ruling AKP party, writes Jody Sabral. While it re-introduces religion into schools, it also provides economic opportunities for the AKP. 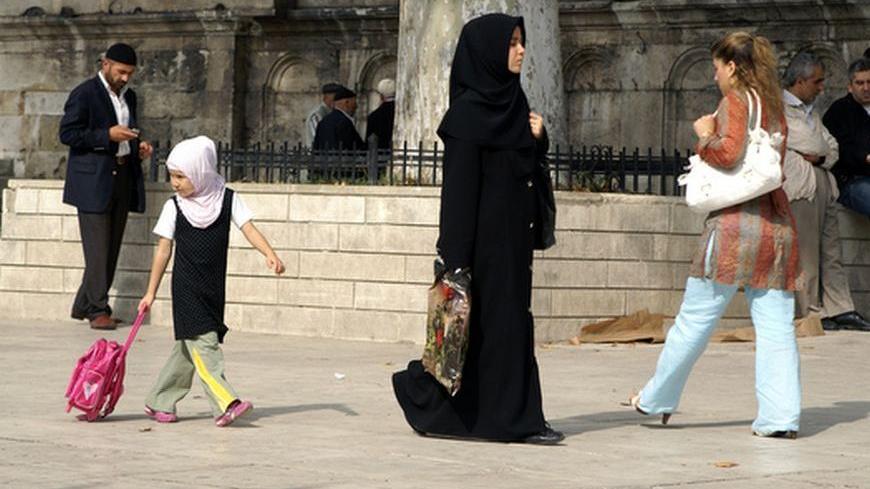 A mother and her covered child pass a secular woman outside Fatih Mosqe in central Istanbul. - Jody Sabral
Jody Sabral
@@jsabral
May 16, 2012

Prime Minister Recep Tayyip Erdogan’s dream to raise a more “pious generation” is one step closer to reality with new education reforms that include optional Koran courses for children as young as 11 years old. The reform bill, which also ups compulsory education from eight to 12 years, was approved earlier this month by President Abdullah Gul, following months of controversy that ended with deputies from the ruling AKP and main opposition CHP parties brawling in public.

Supporters of this religious conservative agenda are pleased with the reform. “As a Muslim, some of the changes made me happy. The Koran and the life of the Prophet Mohammed have now become optional subjects from the age of 11,” said Nuray Canan Bezirgan, a women’s rights activist who was thrown out of university in 1997, when the headscarf ban was implemented. But she complains that the reforms haven’t gone far enough. “There is still no way to pray at school and it is impossible to attend school in a headscarf for girls who choose to do it.”

Nuray is an example of Turkey’s growing middle class, who Prime Minister Erdogan represents. She moved to Canada as a political refugee after losing her right to a university education in her homeland and brutal treatment by the police because of the headscarf ban. Nuray was educated abroad but moved back to Turkey to raise her two children in a Muslim country. Having lived in an open democratic society, she was surprised when she returned in 2007 by the continuing restrictions on religious freedoms in the education system. “My eight-year-old daughter was allowed to wear a headscarf in Kindergarten in Canada, but here in a Muslim country she faces restrictions.”

It is this type of thinking that worries the non-practising, pro-secular factions of Turkish society, who believe that with this reform their children will come under pressure to study more Islam.

An agnostic couple, in the creative industries and the media, who did not want to be named, say this is a top-down reform. With a one-year-old son to plan for, the father said, “Education is a way for people in power to mould the new generation and their dream of a future society. This dictatorial decision will affect millions of parents, but no one was consulted for their opinion.” He added, “Religious education has no place at a civil school. It will lead to discrimination. We will never sacrifice our son to their ends.”

Religious education has been part of national curriculum since the 1980s and in recent years has undergone a process of reform to achieve an equidistant approach to religion, largely after criticism by the 20-million strong Alevi community complained that classes are already biased towards Sunni Islam. This new step may undo all of this work.

"The reforms are not only about integrating the Koran into the national education system,” says Ertugrul Kurkcu, an opposition MP from the pro-Kurdish Peace and Democracy party. “It will integrate the ministry of religious affairs, or Diyanet, into the national education system because the system now comes from a secular tradition and does not have the resources to deliver such an education.”

The reform is known as the 4+4+4 bill because it extends the compulsory, consecutive eight years to 12. The main opposition Republic People’s Party (CHP) criticised the bill, saying it has been adopted for ideological reasons rather than pedagogical concerns. After the first four years, children will be able to enroll in other types of educational institutions, namely vocational schools. The last four years will also permit distance learning.

In Turkish terms, vocation school refers to Imam Hatip schools where the countries Imam’s are educated and where girls can study in the headscarf. The prime minister himself graduated from an Imam Hatip school, so it was no surprise that Erdogan hailed the reform as a victory for democracy.

“This law has shown once again who the true owners of national sovereignty are. It is a law that shows how much democracy in Turkey has advanced,”Erdogan said at a party meeting days after the reform was passed. Referring to the military’s traditional role of protectorate of secularism, Erdogan added, “Fascist pressures have been corrected through democracy.”

However, the reforms are short- sighted because school buildings are not ready to cope with the new system of 4+4+4, which will separate younger children from older ones, said Kurkcu. “The school buildings in Turkey are very simple in structure. With this new separation, new buildings will have to be constructed. We simply don’t have the infrastructure for such reforms which does beg the question what this bill is all about.”

Construction is big business in Turkey — it represents six percent of GDP — with mostly AKP- aligned companies getting the rights to local tenders. The bill could therefore effectively create a construction boom as growth is predicted to slow in Turkey, a country that has so far been largely unaffected by the 2008 banking crisis.

But local businessmen say they know where the wealth will be concentrated. “The municipalities are AKP’s cash boxes. If you don’t support the party you don’t get a look in edgewise,” said an Alevi businessman, who didn’t want to be named. He went on to explain that most of his business these days is done abroad in Russia and Africa because he finds it impossible to secure local tenders.

And so the debate over education extends to explosive issues in Turkey, including questions of religion, ethnicity, and economics.

“Students have to take an oath every morning which ends by saying ‘How happy is he who can say I am Turk’. This phrase leads to discrimination against those who are not Turk, such as Kurds and Alevis,”said Nuray, even though she supports the changes in elective religious education. “Teachers dictate to students what is right and wrong according to formal Turkish ideology, but kids need to learn how to research by thinking differently. There needs to be open discussion in the classroom.”

And here is Turkey’s dilemma; striking the balance between freedom of religion and freedom from religion, while promoting diversity of its cultural identity. The reform passed with 295 votes, and with 326 AKP deputies in parliament, and a president who is an AKP party member, it is easy to calculate how this agenda is moving forward. It’s not however quite as straightforward to predict what the oath pledged to Ataturk’s republic every morning may become—and where this will leave this moderate secular Muslim democracy.

Jody Sabral is a broadcast journalist, film maker and author. While based in Turkey for ten years, she worked for the English news service at Hurriyet, Aljazeera English, France24 , CBC Canada, Press TV, Iran's first 24-hour live news channel broadcast in English and Metropolis TV, an arm of VPRO the Netherlands.