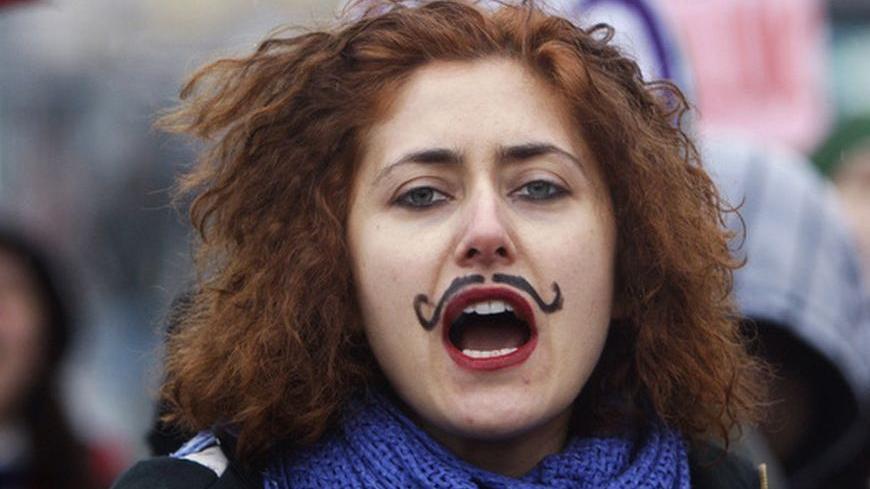 A woman shouts slogans during a demonstration to mark the International Women's Day in the Asian side of Istanbul March 6, 2010. - REUTERS/Osman Orsal
Jody Sabral
@@jsabral
June 4, 2012

Andrew Finkel, a foreign correspondent and author who has lived in Turkey for over 20 years, described the comments as "mystifying" and wrote on his New York Times blog, Latitude: “Is the prime minister of Turkey losing his grip? Normally he has one hand on the pulse of the people, the other on his opponents’ jugular.”

Women’s rights groups reacted immediately by taking to the streets in protest after reports surfaced in the press that this was not just an absurd comment but an opening to a parliamentary debate on banning abortion all together. The practice was liberalized in 1983 in response to the high number of illegal terminations and maternal mortality.

“This was politicking by way of using a woman’s body,” Isin Elicin, a Turkish broadcaster told Al-Monitor, she adds, “I wish AKP’s female supporters would speak out against this because they have also been politicized over the head scarf issue and are very experienced with such political games. The government shouldn’t decide about such issues, women should decide on their own terms.”

Infamous for his fledging diplomacy Erdogan advocates for large families, which he says are a must to sustain the Turkish population. But linking his dreams of an expansive populace to failed anti-terrorism operations shows a failure to broach two of Turkey’s most pressing issues; sliding women’s rights and the Kurdish question.

“I see abortion as murder, and I call upon those circles and members of the media who oppose my comments: You live and breathe Uludere. I say every abortion is an Uludere,” Erdogan said at a conference last week in Istanbul, quoting the location of where the 34 Kurds were killed on the Turkey Iraq border.

The strike was another nail in the coffin of a failed policy by the ruling Justice and Development Party (AKP) on how to resolve the decades-old war of attrition with Kurdish rebels fighting for autonomy in Turkey’s South East. “Kurds want a real apology over the Uludere incident. And, although he has admitted it was a mistake, and described it as murder we still don’t know who is responsible for the attack. This is part of a wider military assault on the South East that is not being reported in Turkey.” Hasan, a Kurdish businessman in Istanbul said in response to Erdogan’s comments.

The air strike that saw an entire family killed as they returned from Iraqi territory to Turkey on a smuggling route they’d been traveling for years, became controversial as it is believed US drones were responsible for passing on the intelligence that lead to the strike. An investigation into what went wrong is underway, but has yet to deliver real answers.

Fazel Hamhawramy, a Kurdish rights activist who has been following the incident closely told Al-Monitor: “Instead of making this outrageous comparison, the Prime Minister is in a position to end speculation about the Uludere tragedy by releasing the drone cockpit video of the massacre so people in Turkey would know what actually happened on that fateful night.”

Turkey’s ruling Islamists pledge they are committed to developing Turkey’s democratic principles but a comment by a female journalist on Twitter sums up the way democrats feel in this moderate Muslim democracy: “Great! AKP have finally dealt with education, the press, arts & culture, and now my vagina!”

The comments refer to a string of AKP-led policies; a crackdown against journalists, the planned integration of Koran courses into the national education system in the next school year, ambitions to privatize state theaters as well as numerous slander cases opened against youth theatre groups by the prime minister himself.

Turkey passed legislation against the cross-border travel of its citizens seeking third-party reproductive assistance in March 2010, taking away the choice for childless couples to conceive with outside help should they want to go down that route. It was presented at the time as a measure to keep the Turkish race pure, but screams of a conservative agenda, as does the latest abortion argument, that highlights a failed policy towards the Kurdish issue.

“The prime minister already had abortion on his agenda and used it to divert attention from Uludere, but the only thing it will do is cause more pain," said Elicin. "You may also view this as the prime minister saying those who were killed in Uludere were Turkey’s unwanted children, and this hurts people again and again.”

Jody Sabral is a broadcast journalist, film maker and author. While based in Turkey for ten years, she worked for the English news service at Hurriyet, Aljazeera English, France24, CBC Canada, Press TV, Iran's first 24-hour live news channel broadcast in English and Metropolis TV, an arm of VPRO the Netherlands.