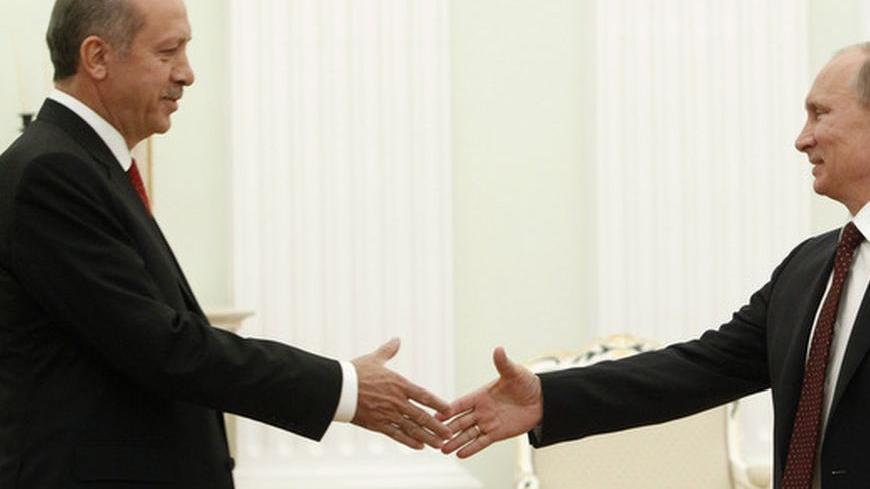 Russian President Valdimir Putin’s high-profile visit to Istanbul on Dec. 3 for talks with Prime Minister Recep Tayyip Erdogan has refocused international attention on Turkish-Russian ties, which have been strained over Syria.

The fact that Putin had postponed this visit, initially planned for Oct. 14, had already fueled speculation about increasing tension between the two countries over this issue.

Such speculation appeared inevitable since news of the postponement of Putin’s visit had come only hours after Turkey forced a Syrian passenger plane en route from Moscow to Damascus and carrying Russian citizens to land in Ankara to be searched for weapons allegedly headed for the Syrian regime. Russian explanations that Putin was delaying his visit on medical grounds did not stop the rumor mill.

Both countries have, after all, been at loggerheads over Syria, with Ankara maintaining that Syrian President Bashar al-Assad — once one of Erdogan’s closest regional friends — would not have lasted so long were it not for Russian support.

Moscow, for its part, has made it clear that political support for the Syrian opposition, which Turkey has been giving from the start, amounts to unacceptable meddling in another country’s internal affairs, and that supplying weapons to Assad’s opponents (who, it believes, are motivated by jihad rather than freedom) has increased the bloodshed in Syria.

Meanwhile, news of Turkey’s imminent request for Patriot antiballistic missile batteries from NATO against the possibility that Assad may use chemical warheads in a desperate last-ditch attempt to retain his position, also resulted in Moscow ratcheting up its angry rhetoric against NATO and consequently Turkey.

Russia is sensitive to developments near its borders concerning missile technology, and made its displeasure known when Ankara decided last year to allow the deployment of NATO’s early-warning radar system — a crucial component of the alliance’s antiballistic missile-defense shield — in southeastern Anatolia.

While that radar’s main aim is to avert a threat from Iran, which is suspected of working to produce nuclear warheads, Moscow says it also poses a threat to its own security interests.

With such a backdrop, it was reasonable for the media to expect high drama from Putin’s visit, especially given that he and Erdogan do not mince words when it comes to touchy issues. That, however, did not happen. Although the sides stuck to their basic positions on Syria, they also signaled an unwillingness to endanger their economically strategic ties over this crisis.

The volume of bilateral trade currently stands at $35 billion, and a slew of agreements were signed in Istanbul to increase this threefold over the next few years. Turkey’s overwhelming dependence on Russian natural gas is also a factor which ensures that ties remain essentially stable, despite political disagreements.

Meanwhile the volume of Turkish investments in Russia is valued at billions of dollars, and the sides have also signed an agreement to transfer Russian nuclear technology to Turkey for energy production. Russians also represent the second-largest contingent of tourists visiting Turkey each year, after the Germans, a fact that has deepened social and cultural interaction.

The warm personal relationship that Erdogan and Putin have enjoyed over the years undoubtedly also kicked in to alleviate tensions during the Istanbul talks. While they stuck to their basic positions on Syria, certain nuanced remarks from both men pointed to a readiness to keep working for a solution to this crisis.

Putin, for example, indicated that new ideas had been put forward concerning Syria and which would be explored further by the two sides, although it is not clear as yet what these are. Erdogan, for his part, did not use the occasion to blast Assad, which was uncharacteristic of him. He argued instead that Ankara and Moscow ultimately wished the "same thing" for Syria, whatever appearance of discord there may be.

All of this comes at a time when evidence is mounting of increased Russian impatience with Assad. Remarks uttered a few days ago by Vladimir Vasiliev, one of Putin’s closest political associates in the Duma, point to a growing belief in Moscow that Assad seriously mismanaged this crisis. It appears Russia is trying to keep its options open even if it is not prepared to dump Assad just yet.

Meanwhile, a day after Putin’s talks in Istanbul, Russian Foreign Minister Sergei Lavrov toned down his criticism of the Patriot batteries to be deployed in Turkey, and conceded in Brussels that Ankara had the right to defend itself. He added for good measure that NATO officials had assured him the alliance has no plans to intervene in Syria.

There are also signs from the Turkish side suggesting that Ankara, too, is trying to keep its options open over Syria now, even if its position on Assad himself remains unchanged. Volkan Bozkir, a former senior diplomat and a key deputy from Erdogan’s Justice and Development Party and who heads the Committee on Foreign Relations in Parliament, provided a concrete example in this regard.

Answering questions during a television interview two days after Putin’s visit, Bozkir said that any solution to the Syrian crisis would have to acknowledge and accommodate Russia’s long-established interests in that country.

Given that the corollary to this suggestion is cooperating with elements of the Syrian regime at some point in time, if not with Assad himself, it appears Turkey is also trying to keep its options open. This is not surprising given that hardly any of Ankara’s expectations regarding Syria have come to pass.

A foreign-ministry source in Ankara told Al-Monitor that there is growing recognition among Turkish officials that any settlements to the Syrian crisis will most likely come in the end as a result of an agreement between Moscow and Washington. Thursday’s meeting in Dublin between US Secretary of State Hillary Clinton and Russian Foreign Minister Sergei Lavrov to discuss the issue does indeed point in that direction.

So the bottom line is that while Ankara and Moscow remain at odds over Syria, neither side is prepared to allow their ties to fall by the wayside for the sake of a dictator whose days are clearly numbered.

Russia is pursuing new efforts for a diplomatic outcome and transition in Syria, while Turkey appears to be reconciled to the idea — which it previously rejected — that key elements of the present regime in Damascus will probably have to be retained after Assad goes.

As for the real basis of current Turkish-Russian ties, these are clearly economic and their mutual interests continue to grow by leaps and bounds, diminishing the likelihood of any debilitating crisis between Ankara and Moscow.

Semih Idiz is a senior Turkish journalist who has covered diplomacy and foreign-policy issues for major Turkish newspapers for 30 years. His opinion pieces can be followed in the Turkish daily Taraf, Hurriyet Daily News and Al-Monitor.