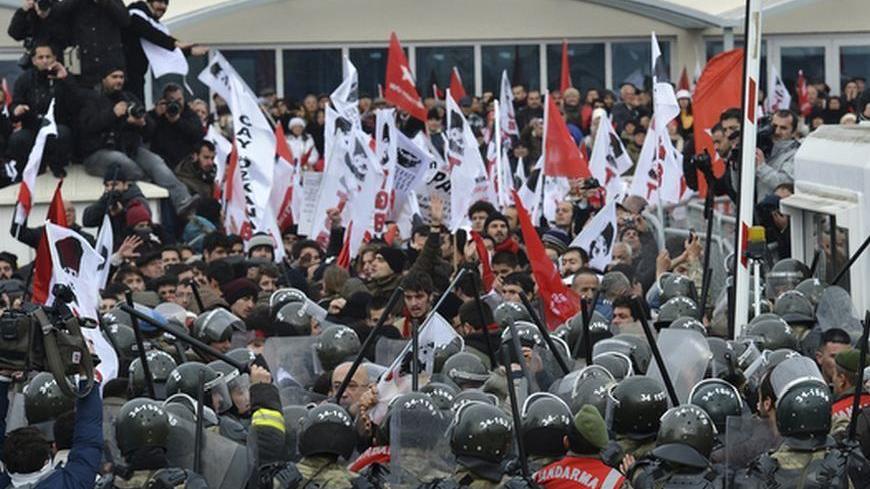 Protesters are blocked by Turkish soldiers as they try to march to a courthouse near Istanbul Dec. 13, 2012. - REUTERS/Anadolu Agency

Last week, Turkish Prime Minister Tayyip Erdoğan made a public remark that gave shivers to Turkey's liberal democrats. After complaining about the obstacles that Turkey's archaic-minded judiciary has raised against elected governments, he took on something more fundamental: “Time and again,” he said, “the obstacle we face is this thing called separation of powers.”

In the next few-days, senior names in Erdoğan’s party spin-doctored this comment. What the prime minister actually opposed, they explained, is the judiciary’s overstepping into the political realm — such as blocking the privatization of state companies out of a commitment to “Atatürk’s principle of statism.” About a week later, Erdoğan himself confirmed that his intention was to condemn not the separation of powers, but its misuse.

Yet still, Erdoğan’s reckless comment was taken by some as a manifestation of his gut feelings, if not true intentions, about the nature of political power: that he wants minimum checks and balances on the executive, which is dominated by none other than himself. Those who prefer bolder terms even spoke of Erdoğan’s “dictatorial ambitions.”

In fact, it would be unfair to call Erdoğan a “dictator.” Such rulers run a country by brute force and eliminating all opposition by decree. Erdoğan, however, owes his political power to the ballots. As the leader of the incumbent Justice and Development Party (AKP), the most successful political phenomenon in recent Turkish history, he has been winning every election since 2002 with a steady increase in his votes. “The people,” in other words, certainly give Erdoğan a mandate.

Moreover, the ten years that the AKP has spent in power has been mostly a decade of economic progress and political reform. Thanks partly to the European Union accession process and partly to the AKP’s own vision, which has proved less nationalist and more pragmatic than most of its predecessors, many liberal changes have taken place in Turkey. Military tutelage and police torture became history. Minorities, ranging from Kurds to Christians, gained new rights.

In addition to that, the fears by Turkey’s hard-core secularists that the AKP would destroy the secular republic to create a “shariah state” also proved to be wrong. Despite its Islamist roots, the AKP evolved to a “post-Islamist” party, which, in the words of Oliver Roy, “recast[ed] religious norms into vaguer conservative values, [such as] family, property, honesty, the work ethic.” Today, the AKP is still too religious-minded for Turkey’s seculars, but the tensions between the two camps — such as role of religion in public life, religious education, or abortion — are not too different from what can one find between moral conservatives and secular liberals in the United States.

But all such accomplishments of the AKP have recently been overshadowed — not by the “hidden Islamist agenda” that the secularists feared, but a more mundane problem: lust for power, especially Erdoğan’s personal lust for power.

This has been evident in the prime minister’s intolerance to criticism. Quite a few critical journalists have faced his public anger, and, more importantly, some of them have lost their jobs overnight. In the ranks of his party, too, Erdoğan gradually became the only power broker, by either excluding or silencing any differing voice.

Meanwhile, at a time when the Turkish Parliament works to draft a new and more liberal constitution — in order to replace the current one which was devised by a military junta 1982 — Erdoğan launched a new campaign that redefined the expectations for the new charter: transition to a presidential system.

Since the beginning of the Turkish Republic in 1923, Turkey has had a parliamentary system in which the country has both a president and a prime minister. The latter has the real executive power, but the president has some powers as well, along with the prestige of being the head of state.

However, Erdoğan now wants to combine these two posts into a single seat, and this has become the real gem he and his loyal supporters expect from the new constitution. Their “presidential system” first sounds like the American system, but the details that the AKP has recently outlined show very little trace of the checks-and-balances present in the United States Constitution.

All of this has raised the fear among most liberal democrats in Turkey — who used to support Erdoğan’s reformist policies — that the country might be heading to a regime that can be called illiberal democracy: A system in which political power will be based on free and fair elections, but that power will be too unlimited, and liberties such as the freedom of speech will be curbed. (Erdoğan cultivates such fears by his intrusive comments on almost every issue, from the number of children every family should have to the content of soap operas.)

That is also why some of the former supporters of Erdoğan are putting their hope in President Abdullah Gül these days, who comes from the same political roots with the prime minister, but who proves more liberal on almost every issue. Gül’s term will end in 2014, and the subsequent elections for the presidency will be key for the future of Turkey. If Erdoğan can realize his dreams of transition to a presidential system, he will probably win these elections and become the sole power broker. If the system does not change, he will again probably be elected as president, with its current and more modest powers. And then Gül, some hope, will become a politician again to lead the AKP or found a new party.

The year 2013 will be a curious one for Turkey in which these options will be debated and contested heatedly. Only one thing seems certain: “Military tutelage” is now history, and democracy is the name of the game. It is just not very clear how liberal this democracy will be.

Mustafa Akyol is an Istanbul-based journalist and author of Islam without Extremes: A Muslim Case for Liberty.