Nassif Hitti argues that a cease-fire cannot be a precondition for talks to end the Syrian conflict. Talks under the auspices of UN Special Envoy Lakhdar Brahimi need to start immediately if there is any chance for a diplomatic resolution to the crisis. 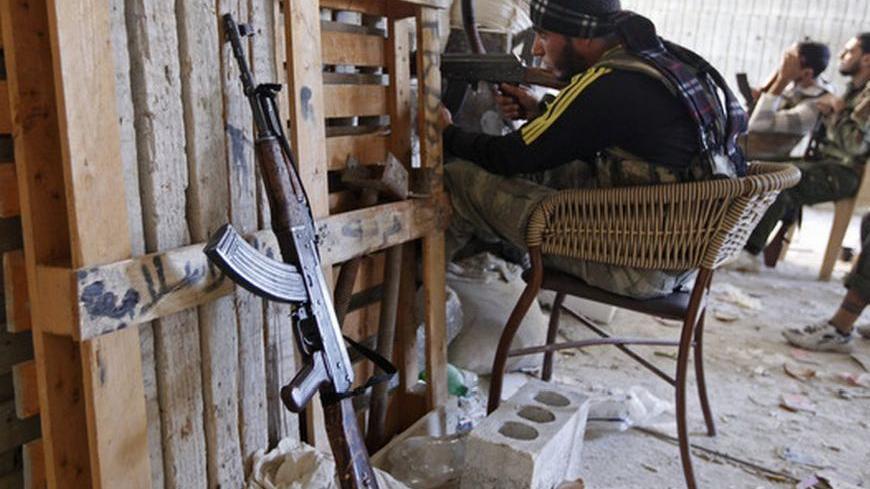 Syria's multifaceted conflict seems to be locked in a zero-sum game, with warfare ravaging the country.

One issue that brings together an otherwise divided opposition is the sine qua non of Syrian President Bashar al-Assad's removal, while the Assad regime is still thinking in terms of soft, limited, well-contained reforms that do not change the regime's authoritarian nature.

A convergence between the two warring parties is that there is as yet no sign of a negotiated solution; military force carries the day. Each party feels time is on its side. Yet a military solution remains out of reach because of the internal balance of power and the differing agendas and involvement of external parties. Unless an agreement is reached among the external supporters and sponsors of both the Syrian government and the rebel forces for an orderly political transition (one that will lead to a regime change through negotiations and gradualism with all necessary guarantees to the parties involved), then the pre-diplomacy will continue. The policies of declarations and counter-declarations among the external actors — as well as the Syrian ones — will continue at the price of more bloodshed and the erosion of the Syrian state itself.

The precondition of a cease-fire as a necessary step before engaging in negotiations, instead of integrating such a cease-fire directly into the negotiation process itself, will not produce any results, as we witnessed from day one of former UN Special Envoy Kofi Annan's mission. Indeed, such an approach will hand the warring parties a veto over a political solution.

The focus must be instead on adopting a UN Security Council resolution, carrying a clear, firm message from the different external patrons and allies that talks will start immediately without any preconditions, including a full cease-fire. The Geneva declaration should be the basis of such a resolution. This would allow a clear message to be sent that any party that continues the shooting while talks start between mandated representatives of the regime and the opposition will be isolated. The talks must be conducted, as the Security Council resolution should stipulate, within a clearly established agenda of negotiations and a well-defined — flexible but not open-ended — time frame.

The take-off phase of the negotiations should be accompanied by the deployment of an agreed-upon international Arab peacekeeping force to achieve and and monitor a cease-fire. If it is for the Syrians to work out the talks' agendas and the interconnections between these issues, guarantees for genuine and productive negotiations to succeed must be provided by the Security Council. The third-party role is detrimental for the credibility of productive and transformative negotiations.

The supervision, facilitation and provision of guarantees for implementation must be assumed by the UN's representative, Lakhdar Brahimi. His mandate should have the full backing of all relevant external actors via the two organizations he represents. Time, as we have witnessed, will not only create more suffering and tragedy, but will also lead to greater radicalization of the parties, rendering a negotiated solution more difficult to achieve.

Otherwise, the slow disintegration of the Syrian state and the fragmentation of Syrian society will change the parameters of a solution entirely, and will have a devastating spillover effect on Syria's neighbors. This neighborhood of countries is are already vulnerable for different internal and external causes to a de facto breakdown of Syria. We are already witnessing the symptoms of the trilogy of the Somalization, Lebanonization and Afghanisation affecting the country.

The failure to save Syria by adopting a wait-and-see attitude and engaging only in diplomatic gamesmanship will have strategic implications whose shock waves will reach beyond the Levant and create regional instability and chaos. Every day that goes by renders a negotiated solution — one based on a creative and more complex model of governance for a new Syria, made by the Syrians, and taking into consideration the interests of all the components of the society — more difficult to reach.

Let us not forget amidst the Syrian tragedy and the power plays that sustain it, that time, tainted with blood, has always been the enemy of peace in the Middle East, particularly now that the crisis has hit the epicenter of the region and the heart of the Arab world.

Ambassador Nassif Hitti is head of the Arab League Mission in Paris, a permanent observer at UNESCO and a member of the board of Al-Monitor. The views he presents here are his alone and do not necessarily reflect the views of these organizations.