In Syria, Kurds Carve Out Territory of Their Own

Syrian Kurds have quietly taken control of sizeable chunks of territory in the northeast of the country, reports Josh Wood. With the state gone, they are organizing for self-governance — but conflict may be coming. While Free Syrian Army flags wave at some protests, many Kurds strongly distrust the opposition forces. 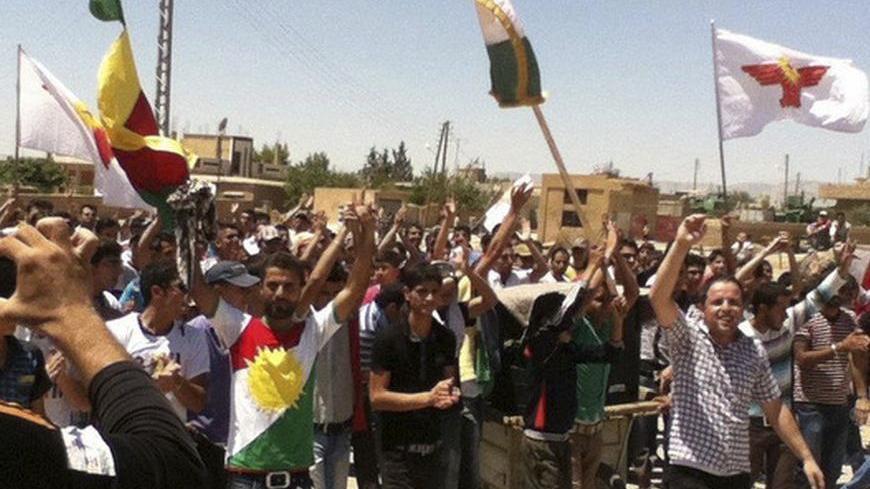 DEREK, Syria — The civil servants and security officers of Syrian President Bashar al-Assad’s government have not totally abandoned this town of 60,000 in the northeastern extremities of the country, but they might as well have.

On Sept. 27, protesters waving the flags of Iraqi Kurdistan and the Free Syrian Army marched toward the headquarters of the secret police, the once-feared mukhabarat. As they neared the building, the language of their chants switched from their native Kurdish to Arabic to echo the refrain heard across the Middle East for more than 21 months now: “The people want to overthrow the regime.” The enforcers of the Damascus regime stared out at the crowds from behind the worn metal grates of the structure’s windows, powerless.

Depictions of Assad and his late father Hafiz are painted on the entrance of the complex, next to words declaring this to be “Assad’s Syria.” But in the late afternoon sun, this dusty street — and indeed the entire city of Derek — appeared to belong to the city’s Kurds, who make up a the vast majority of residents here.

There are around two million Kurds in Syria, making up about 10% of the country’s total population. They are located mainly in the country’s northeast. It is here that they have quietly taken control of sizeable chunks of territory in this sliver of land sandwiched between Turkey and Iraq. As did the 28 million other Kurds in Iraq, Turkey and Iran, Syria’s Kurds endured decades of marginalization and subjugation under unfriendly governments. Now autonomy is on the minds of many here. With the state gone, they are organizing for self-governance — from garbage collection to town councils and armed forces — as they lay tentative claim to some areas.

As clashes in Aleppo evolved into the frontline of Syria’s civil war in July, Kurdish groups took advantage of the diversion of government troops and attention to make their move.

“We said to the government forces, ‘You should go out and leave in 12 hours or 24 hours; otherwise we will start fighting you,’” said Mohammed.

On July 19, the Popular Protection Units, a shadowy Syrian Kurdish paramilitary force known by the acronym YPG, began launching assaults on some government forces that refused to leave.

What resulted is an awkward standoff, as the Syrian government has lost overall control of most of the Kurdish areas, but its presence has not entirely evaporated.

The Syrian flag continues to fly on some buildings in Derek, such as schools and courts. With the economy damaged by the war, much-needed salaries continue to come in to local state employees, and Kurdish groups do not yet have the infrastructure nor the funds to provide such services.

Some state security buildings remain in the town in a stalemate with Kurdish groups. The feeling is that Assad is reluctant to open a new front to retake territory here, yet Kurdish groups do not have enough weapons or men to deal with the retaliation that could come if they try to purge remaining elements.

This remaining presence has led to allegations that the PYD has been cooperating with the Syrian government, and that it came to control the area via a coordinated troop withdrawal rather than by force.

“We cannot kiss the hand that kills us; we wouldn’t do that,” retorted Mohammed, the leader of the group.

In areas under their control, Kurdish groups began setting up the institutions of self-governance. A mala gel or “people’s house” was set up in each town and city to handle small disputes and act as a gathering place for citizens. A new volunteer police force called the Asayish was set up along with Kurdish-language schools, which were illegal under Assad control.

“We feel free and we are happy because Kurds are managing this area,” said Nazar Younes Ramadan, 55, a fighter who spent 11 years in prison for Kurdish political activities under the regime of Hafiz al-Assad.

The civil war, which has claimed the lives of over 30,000 according to Syrian opposition groups, at times feels a world away here; one cannot hear the report of guns or rumbles of artillery, there is only a limited armed presence on the streets and food is plentiful, though it comes at a higher price than usual. For now, the war exists mostly in the flashes of carnage in Aleppo and Damascus on television screens. But conflict may be coming.

Before the uprising and subsequent civil war, Syria exported more than $4 billion in oil to the European Union every year, about a third of the country’s total annual export revenues. Much of that oil — and much of the country’s natural gas — sits beneath the ground of Syria’s Kurdish areas.

About 30 kilometers from Derek, the oil town of Rmeilan remains under firm regime control.

“Aleppo is the commercial capital of Syria and Rmeilan is the oil capital of Syria, so everybody wants to control this area — both Assad and the Free Syrian Army,” said Mohammed Amin, the head of the mala gel in Girkilige, the Kurdish-controlled town that borders Rmeilan.

“In the future, we expect the war to come here,” said Reza Turkmani, the Girkilige Asayish chief.

Turkmani commands around 140 men, all volunteers, and more are signing up. For a police force, their arsenal is heavy: Guards on the premises were armed with Kalashnikov assault rifles, and Turkmani said that that the group had stockpiled rocket-propelled grenades and Russian-made PKM machine guns.

There is also fear that the war will come to Qamishle, the largest Kurdish city with a population of about 250,000, where government forces retain a strong and visible grip on the city center. In several split towns in the northeast, Assad forces appeared to be preparing for a fight, with security buildings barricaded with sandbags and streets blocked off by anti-tank obstacles.

For the Kurds, there are multiple avenues to conflict. While Free Syrian Army flags are waved at some protests, the PYD strongly distrusts the rebels and does not want them in their areas.

At a rally associated with the PYD on September 27, the speaker, Hassan Kojar, raged against the “traitors” in the Kurdish community who were calling for Free Syrian Army involvement in the northeast, emphasizing that the Kurds must instead protect themselves. Kojar and others fear that if an outside, non-Kurdish force is let in, the rights and power they have won may be taken away.

Calls for autonomy — and the steps on the ground toward it — could also problematic.

Turkey has threatened to intervene in northern Syria if it deems groups operating there a threat. The PYD has been accused of having ties to the Kurdistan Workers’ Party (PKK), a group considered a terrorist organization by a number of countries and an archenemy of Ankara.

While the PYD denies any ties to the PKK, pictures of Abdullah Ocalan, the imprisoned founder of the militant group, hang in many offices of PYD affiliates.

There are also strong divisions between the many Kurdish parties in Syria, generally marked by accusations of being "traitors" working in the interest of the community’s opponents.

But to deal with the threats from the outside — and maybe the inside, as well — armed forces are being constructed. Supporters of the YPG paramilitary, generally the same people who support the PYD and its affiliated groups, portray the force as an army for Syria’s Kurds. The PYD’s detractors label the YPG the political party’s militia.

The YPG is tasked with protecting borders in Kurdish-controlled areas and other sensitive sites. The group has remained secretive and its strength is unknown.

On Tuesday, Oct. 2, a YPG member was killed in Derbisye when Turkish troops fired across the border.

In Iraq, more than 600 Syrian Kurds are receiving military training from the Kurdistan Regional Government’s Peshmerga military force. While Syrian and Iraqi sources acknowledged the existence of the force, they have remained tightlipped on how it would be used. It has also been rumored that the YPG has refused to allow the trained men to re-enter Syria.

Many here want more defensive — and some, offensive — military capabilities.

“If you do not protect yourself, nobody will protect you,” intoned Kojar, the speaker at the rally. “We will be free when we can protect our land, our language, our culture and our political parties.”

And then he called on the Kurds to take Qamishle by force.

Josh Wood is a journalist based in Beirut. He regularly contributes to the International Herald Tribune and Esquire Middle East. 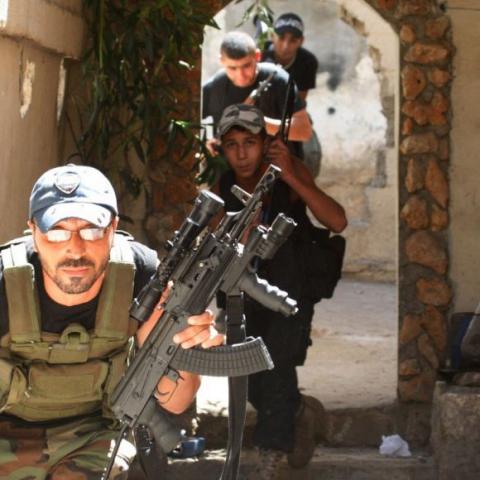