Layla M., on the ground in Damascus, reports that amid sporadic artillery fire and power outages, with helicopters whirring overhead, residents verged on jubilation. But the city was a ghost town Wednesday night, hopes tempered by fears ranging from economic paralysis to chemical weapons. 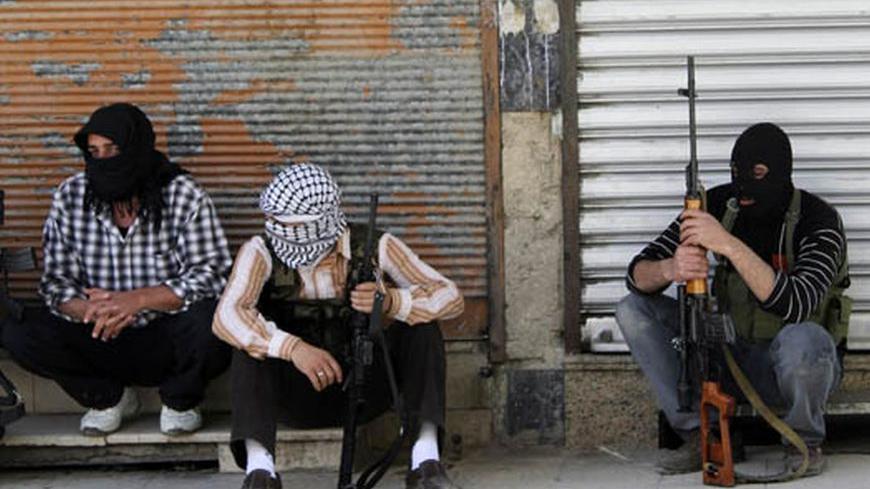 Free Syrian Army members, with covered faces and holding weapons, sit by the side of a street in Qaboun district of Damascus - REUTERS
Layla M.
July 19, 2012

They're calling it "Zero Hour" here in Damascus as the clock on the Assad regime appears to be counting down. The only question on so many lips is when, not if, the 49-year-old Baath regime and its leader of the past 11 years, Bashar al-Assad, will fall. The bomb that exploded during a secret "crisis cell" meeting of the regime's key officials on Wednesday has already wiped out the Syrian’s regime's top military and government brass, and rumors abound that the president himself has been seriously wounded — if not killed. Assad's failure to make any public address or appearance has only heightened public feeling that his once iron grip has been loosened.

"From what we're seeing and hearing on the streets it already looks as if his time is up ... but if he doesn't show his face by tomorrow then l would say — the regime has deﬁnitely crumbled," said one Damascus resident.

The sense of the Syrian regime's end has built incredible momentum in the past 72 hours. When l arrived to Damascus on Monday the onslaught on Midan, Damascus’ traditionally conservative southern district, was at its peak, with residents trapped between government tanks and Free Syrian Army guerrillas. Damascus already had a surreal, contradictory air as government forces struggled to contain the eruption of ﬁghting in southern districts, while residents in the northern and western districts continued about their business with muted enthusiasm. "This isn't the first time we've heard of heavy ﬁghting in Damascus ... let’s see how long it lasts," a resident in Damascus’ then unaffected areas told me.

As l write from one of Damascus’ most affluent areas, between intermittent power cuts and Internet outages, amid sporadic artillery fire with helicopters whirring in the background, nothing is muted about what is increasingly seen on the streets as Syria's "tipping point." One Syrian l met with was already thanking the FSA for ridding the country of what he described as "the scum of the earth" in Wednesday's bombing, while a local shopkeeper prayed he would wake up in the morning to an Assad-free nation so "the mothers of all those boys who have been ﬁghting so bravely can raise their heads proudly and ﬁnally feel a sense of justice and reason for all they have lost."

But feelings of jubilation were tempered by a number of factors, most notably the widespread fear of government forces using chemical weapons against the people. If reports of FSA victories encouraged some to take to the streets bearing arms, or in protest, against the regime, rumors of govemment forces being issued gas masks left many too jittery to venture outside.

Another reason for trepidation were accounts making the rounds that the government's militia groups, the shabiha, were entering homes in areas of heavy ﬁghting, looting and killing women and children with knives. While the accounts were unveriﬁed, this provincially-minded city quickly absorbed the "news" and wasn't taking any chances.

On any given summer's day in Damascus, the city's streets hustle and bustle long into the night. But this Wednesday, the streets were deserted by nightfall. Even the most dependable late-night haunts lowered their shutters by 8 p.m. This loud, boisterous city — the oldest inhabited city on Earth — was a ghost town after the sun went down, with many of those who closed early feeling unsure about opening in the morning. Even the iconic Rawda cafe, a continually heaving backgammon-and-tea venue that seats 500 people, had scarcely more than 30 patrons Wednesday evening.

Those who dared to go out, especially by car, encounterd checkpoints on every other street, manned by FSA or government forces, depending on the area. Entering any neighborhood housing security buildings and government officials, or that's near the presidential palace, requires showing ID cards and proof of local residence to a plainclothes government soldier holding a rifle. But while such heightened vigilance may be intimidating initially, it takes one look at the faces of those men standing guard to the last vestiges of the regime to see who is really disturbed.

Heavy casualties in the Syrian army and reports of its retreat from some areas of Damascus had already dented government supporters' morale, and after Wednesday's bombing anxious looks could be seen on soldiers' faces.

"If Syria's number one has died, who cares about what happens to the president now," I overheard one guard telling another on the street. Whether by "number one" he meant Daoud Rajha, the defense minister, or another top official killed Wednesday, the sense that the sand was streaming to the bottom of the regime's hourglass was palpable.

The next 48 hours loom as the most crucial in Syria's 18-month uprising. "If the FSA keep gaining ground the way they have ... and manage to keep hold of them, then I think we'll be celebrating a new dawn in Syria in time for Ramadan on Saturday," said Mohammed from Damascus.

One thing's for sure: the country cannot bear much more of the emotional trauma, physical destruction and economic paralysis that have overtaken it. "No one is buying, no one is selling, the Syrian pound is weak, and no one can afford to import or risk the goods not arriving ... prices of everything have skyrocketed," said Marwan, an agricultural-products supplier.