In Cairo, Protesters Didn't Pledge Allegiance to a Flag

In the sea of protesters outside the US Embassy in Cairo — a mix of Islamists and dissatisfied young men — there was an astonishing number of black Islamist flags, much like the ones used by Al-Qaeda, writes Tara Todras-Whitehill from Cairo. But a flag vendor didn't feel they were brandishing an allegiance to Al-Qaeda as much as to Islam. 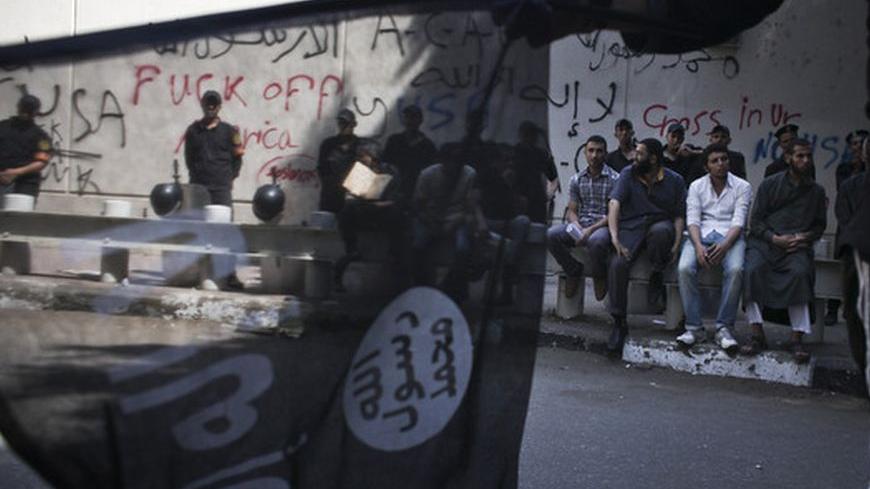 An Egyptian flag vendor waves an Islamist flag in front of riot police and protesters outside of the graffitied US embassy in downtown Cairo, Egypt, Wednesday, Sept 12, 2012. - Tara Todras-Whitehill
September 13, 2012

CAIRO — Ashraf Mohammed, 24, a flag vendor, woke up early Wednesday and took his wares to the front of the US embassy in downtown Cairo. He was selling black Islamist flags with the decree “There is no God but one God and Mohammed is his prophet” — flags that looked just like the ones used by Al-Qaeda.

Behind him, the walls of the American compound were overwhelmed with graffiti of crude curse words, as well as such phrases in Arabic like "Oh Obama, all of us are grandsons of Osama" and "Khaybar, Khaybar, oh Jews the army of Mohammed is coming." “United States of Muslim,” was scrawled on the front of the embassy. A white version of the Islamist flag hung limply from the center of the entryway as riot police stood idly underneath.

The night before, about 2,000 protesters marched to the US embassy in Cairo, reportedly wanting revenge for a little-known, badly-dubbed film in which the prophet Mohammed was depicted as having oral sex and promoting pedophilia, among other things. In fact, no one really knows who is behind the film, adding a surreal element to the saga.

In the sea of protesters outside the embassy — a mix of Salafis, Islamists and dissatisfied young men — there were an astonishing number of black Islamist flags being waved alongside Saudi and Egyptian colors. There was minimal security presence and some of the protesters breached the first wall of the compound, tore down the US flag and raised the black Islamist flag in its place.

The Al-Qaeda flag raised over the US embassy is not an image Americans will easily forget, and in an election year, could be a serious detriment to Egyptian-US relations. This past week, President Mohammed Morsi lauded the arrival of a group of US businessmen, who were trying to bring money back to Egypt, which is in desperate need of new economic capital after it dried up post-revolution. Images of the Al-Qaeda symbol flying boldly over the US embassy will do nothing to help that cause.

Yet, protesters outside the compound didn't see the problem with using the Islamist flag as their protest emblem. All of the demonstrators I talked to were adamant that they were not Al-Qaeda supporters, but were using it to protest against America and support Islam. I asked Mohammed, the flag vendor, if most of his customers knew that the flag was also an Al-Qaeda symbol. He shrugged his shoulders and said, "This is not why people are buying. They are buying it for Islam and to show America they are wrong."

Dr. Zeidan Anis, a professor at Gulf University who was taking part in the residual protests understands how the flag might be perceived, but also said that's not the point. "I think it is not for al-Qaeda, it's just the flag for Mohammed," he explained. He hadn't seen the now infamous “film,” nor had most of the protesters in front of the embassy, for that matter. But he was upset at the US for the film, even though he realized it wasn't endorsed by the government. “American people are free to express but must respect other people's religions,” he said. “American people are free from the blood of the film but they don't respect other people's religions."

Tara Todras-Whitehill is a documentary photographer who has been living in the Middle East for over 7 years. She was a staff photographer for the Associated Press and is now currently a freelance photographer represented by Polaris Images.