Iraq’s once-battered oil sector is further eclipsing production in Iran, relieving pressure on world oil markets and facilitating the imposition of draconian new sanctions on Iran. While Iranian officials say they are ready for the sanctions, writes Barabara Slavin, American experts wonder if the assurances are exaggerated. 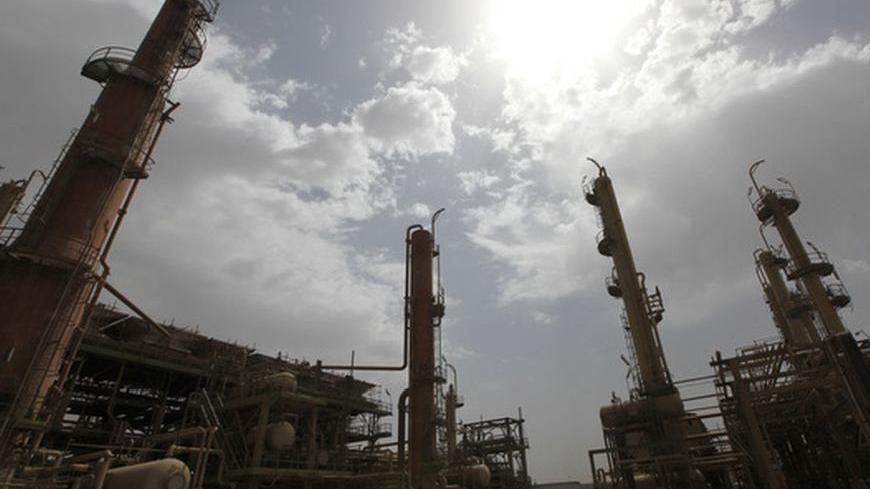 A view of Doura oil refinery in Baghdad - REUTERS/Mohammed Ameen

A day after the European Union confirmed that its oil embargo on Iran would go into effect as scheduled on July 1, a spokesman for Iraqi Deputy Prime Minister for Energy Affairs Hussain al-Shahristani told Bloomberg news Tuesday (June 26) that Iraq's output in June was more than 3.07 million barrels a day, just shy of Iran’s 3.1 million barrels. Iraq predicts production of 3.4 million barrels a day by the end of the year.
Despite bureaucratic hurdles in Iraq and the continued absence of a national oil law, the challenges there to production and exports pale in comparison to Iran’s situation. Unlike in Iran, international oil companies are actively renovating Iraqi fields neglected during long years of war and sanctions against Iraq. In Iran, however, outside investment is drying up and customers are fleeing. On Tuesday, South Korea announced that it was also ending imports of Iranian crude effective July 1.
Battered by sanctions directed against the country’s nuclear program, Iranian oil exports have plummeted this year from 2.5 million barrels a day to between 1.2 million and 1.8 million barrels. However, the price of oil has also been dropping lately to under $80 a barrel primarily due to the weakness of European economies and a slowdown in China’s frenetic growth.
Guy Caruso, an energy expert at the Center for Strategic and International Studies, said Tuesday that the combination of increasing Iraqi and Saudi production is sufficient to satisfy Iran’s former European and other customers for now. Speaking at the Johns Hopkins University School of Advanced International Studies, Caruso noted that the Barack Obama administration has provided waivers from US sanctions to seven countries to continue to buy some Iranian oil because they have complied with new US legislation requiring significant reductions in petroleum imports from Iran. China, however, has yet to receive a waiver.
“The [lack of] insurance is the major issue limiting oil exports for Iran,” said Sara Vakhshouri, an energy consultant and former adviser to the National Iranian Oil Company International, referring to sanctions on major European insurers of shipping that also go into effect July 1.
Addressing the same conference, Vakhsouri noted that Iranian oil executives had been bracing for the new sanctions and said they were “psychologically” prepared by long experience dealing with embargoes and other export disruptions caused, for example, by the 1980-88 Iran-Iraq war.
Iran will likely increase shipments to China and India, she predicted, and will deliver imports using its own tankers, which Iran will insure itself. “There are lots of negotiations going on” to get around these obstacles, she said.
Caruso predicted that oil prices would remain under $100 a barrel for the remainder of the year — barring a military strike on Iran, which he considers unlikely — but said there was a danger that Iran would sabotage Iraqi oil production to boost prices.
He also predicted that Iran would seek to prolong nuclear negotiations with the five permanent members of the UN Security Council plus Germany. A third round of talks this year were held in Moscow June 18-19 but deadlocked over Iranian calls for recognition of its right to enrich uranium and Western demands that Iran stop production of 20% enriched uranium, send out its stockpile of that uranium and close an underground site at Fordow.
“You could see a scenario with Iran dragging things out but needing more revenue,” Caruso told Al-Monitor in an interview. “One way to get the price up a bit is to create some sort of disruption of Iraqi oil that throws uncertainty into the market.”
Abbas Maleki, a former Iranian deputy foreign minister who teaches energy policy at MIT, said that Iran would survive sanctions by intensifying ties with neighbors in Central and South Asia as well as Iraq. He said that Iran and Iraq were collaborating on energy and that Iraq was sending 1 million barrels of crude oil a day through a pipeline to the Iranian refinery at Abadan and getting 1 million barrels of refined products in return — figures that Caruso said sounded inflated.
Maleki presented statistics showing steady Iranian GDP growth over the past decade, but acknowledged that inflation was rising to 34% this year because of sanctions and the collapse of Iran’s currency, the rial, against the dollar.
Iran is compensating for sanctions by pivoting toward Asia but “technologically, the US [remains] the leader and Iran needs to have better relations with this country,” Maleki said.
He suggested that if the international community would recognize Iran’s right to enrich, Iranian officials would decide not to pursue nuclear energy because that is “an old technology…But when the US says all countries can have access to peaceful nuclear technology except Iran, Iranians say ‘why?’" Maleki said.
Barbara Slavin is Washington correspondent for Al-Monitor and a senior fellow at the Atlantic Council, where she focuses on Iran. She tweets at BarbaraSlavin1.