In the lead-up to today’s negotiations in Baghdad, Iran has insisted it doesn't need a nuclear agreement with the international community and that its economy can survive more punishment. But one look at Iran’s currency suggests otherwise, writes Barbara Slavin. No government, however autocratic, can ignore its business interests. 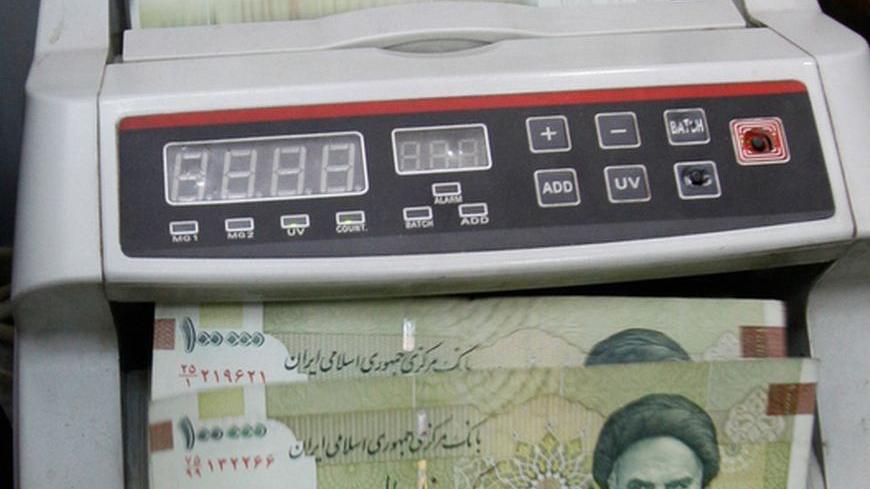 In the lead-up to today’s negotiations in Baghdad, Iranian officials have labored to insist that they do not need a nuclear agreement with the international community and that their economy can survive more punishment.

But one look at the recent gyrations of Iran’s currency suggests otherwise.

The rial tanked early this year after the Barack Obama administration signed a law barring US banks from any dealings with foreign banks that do business with Iran’s Central Bank. The currency sank on so-called unofficial markets to 20,000 to the dollar — half what it was a year ago — before stabilizing at about 16,000 after a new round of nuclear talks in Istanbul in April. An apparently successful visit to Tehran earlier this week by Yukiya Amano, the head of the International Atomic Energy Agency, boosted the rial a bit more.

“It’s a very emotional reaction,” Djavad Salehi-Isfahani, a specialist on the Iranian economy at Virginia Tech, told Al-Monitor. Iranians are converting their cash to hard currency to horde or sending it out “to children for education or to buy property” because they worry about sanctions and even military action, he said.

The fact that Iran now has such a wide gap between the official rate — 12,000 to the dollar — and the rate that ordinary people obtain induces distortions into the economy and encourages corruption of the sort last seen in the mid-90s, when a currency black market thrived.

The unofficial devaluation of the currency has also increased inflation, hurting Iranian consumers and businesses.

According to Bijan Khajehpour, an Iranian business consultant based in Austria, inflation in the Iranian fiscal year that ended in March was about 27% and will exceed 32% this year. Unemployment is at least 20% — much higher for young people and for women — and Iran’s per capita gross domestic product shrank by 18.6% last year to about $4,500, he said.

“Iran’s overall business confidence has not been this low since the final year of the Iran-Iraq war [in 1988],” Khajehpour told an audience at the Woodrow Wilson International Center for Scholars on Tuesday, May 22. “Economic stakeholders have lobbied for a de-escalation in foreign relations.”

To stabilize the currency, Iran needs to maintain at least a process of negotiations and if possible, stave off new sanctions that will further reduce its ability to export oil.

Already, Iran’s oil-production capacity is dropping because of reduced foreign investment and sales. By next year, Khajehpour said, Iraq may be pumping more oil a day than Iran — a huge blow to Iranian pride as well as export earnings.

While Iranians are practiced in finding ways to circumvent sanctions and have benefited to some extent from the nuclear crisis which has raised oil prices, the Iranian government appears to be seeking a respite. In the last round of talks in Istanbul, chief Iranian nuclear negotiator Saeed Jalili implored European Union foreign policy chief Catherine Ashton to delay a European embargo on Iranian oil due to go fully into effect July 1.

The US and its negotiating partners are seeking concrete steps from Iran, such as halting enrichment of uranium to 20% U-235. Even then, the so-called P5+1 appear to be offering only a revised version of a 2009 offer that would provide fuel for a reactor that makes medical isotopes and safety upgrades to that reactor as well as a civilian nuclear power plant at Bushehr. At most, European countries might postpone new sanctions that will make it more difficult for Iran to insure oil shipments.

However, any perceived easing of the crisis would further relieve pressure on the rial and make it easier for the Iranian business sector to plan ahead.

Khajehpour and Isfahani both predicted that Iran — which in the mid-90s succeeded in unifying multiple exchange rates — would seek to eliminate the gap between the official and unofficial rates to stabilize the economy and soothe an anxious middle class.

After all, Supreme Leader Ayatollah Ali Khamenei has declared this year the “year of domestic production and domestic capital,” Khajehpour said.

No government, however autocratic, can ignore its business interests. “The Iranian side will try very hard not to make [the nuclear negotiations] a failure,” Khajehpour said.