It's widely believed that a dismal economy hurt by sanctions was the main reason Iran returned to negotiations with the P5+1 in April. However, writes Djavad Salehi-Isfahani, the Iranians don't seem to be behaving as if their economic clock is ticking. Are they bluffing or looking at a different set of facts? 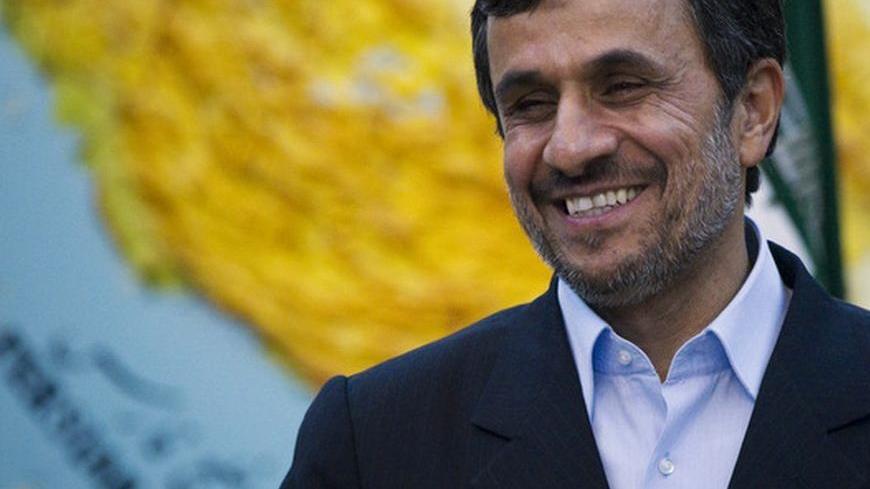 Iranian President Mahmoud Ahmadinejad jokes with journalists as he waits to meet with India's Minister for New and Renewable Energy Farooq Abdullah (not pictured) in Tehran March 4, 2012. - REUTERS/Caren Firouz
June 13, 2012

It is widely believed that a dismal economy hurt by sanctions was the main reason Iran returned to negotiations with the five permanent members of the UN Security Council plus Germany in April.

Early hopes of quick progress were dashed last month in Baghdad, with Iran rejecting tough demands by the P5+1. If the latter’s negotiating position was influenced by the common wisdom that sanctions have pushed Iran’s economy to a point of imminent collapse, then it makes sense for them to maintain a hardline position hoping for a rapidly weakening economy to soften the Iranian side. In that case, there is little reason to be optimistic about the next round of negotiations scheduled in Moscow June 18-19.

For their part, the Iranians do not seem to be behaving as if their economic clock is ticking. Are they bluffing or looking at a different set of facts? Whereas reports in the West paint a dire picture of a failing economy, data supplied by Iran to international organizations depict an economy that, while facing serious challenges, is not on the verge of collapse.

Because Iran’s economy is at the center of the nuclear standoff, it is important to examine a few of the major issues of contention that drive these divergent narratives.

A comparison with Turkey helps show why Iran’s economy has not performed as badly as is generally believed.

The 2011 Human Development Report placed Iran above Turkey, using an index that combines income, education and health. According to the World Bank’s World Development Indicators, a publicly available database (which is curiously underused by reporters), Iran’s Gross Domestic Product per capita was about 90% of Turkey’s in 2009, the last year data are available for both countries.

In the prior ten years, Iran’s economy enjoyed a robust rate of economic growth, averaging about 4.7% per year, which was higher than Turkey’s 3.9%. Of course, Iran’s growth was oil driven, while Turkey’s was due more to rising productivity. Since 2009, when Iran ceased releasing reliable data, all indications are that Iran’s economic growth has ground to a near halt while Turkey’s growth has accelerated.

Inflation is the indicator of economic distress that Iranians mention most when asked about the economy, and is the most widely reported in the Western press. There is reason for its prominence. Since 1985, according to official figures, the inflation rate in Iran has averaged close to 20% per year. During the last decade, it declined to an average of 15%, and fell to about 10% in 2010, before turning up sharply. In the last 12 months, inflation has averaged more than 25% and last month it increased to an annualized rate of 34%.

After nearly three decades of inflation, Iranians do not appear to be any more used to it, but given the length of time it has persisted, the government does not see inflation per se as particularly threatening. It is concerned about high inflation, because that is a daily annoyance that unites a divided population against it.

In any case, the current high level of inflation is not directly related to sanctions. Two factors are most responsible: the inflow of record amounts of oil revenues and recent subsidy reforms.

Government expenditures of oil revenue always bring some inflation because they raise the price of non-traded goods and services and with them, the general price level. For this reason, prices of housing, medical care and fresh fruit are particularly sensitive to oil-induced expansions. Iranians like their oil rent, but they hate the inflation that comes with it.

The other major cause of the current inflation rate is a daring subsidy-reform program launched in December 2010 which raised prices on energy products by factors ranging from 3 to 9, fueling price increases across the board. To make the program politically acceptable, the government redistributed the money it collected by giving each Iranian a $45 monthly stipend.

Reporting in the Western media on the program has been generally negative, but the government believes the reform is actually quite popular. Last month, Iran’s parliament approved extending the program. Subsidy reform has likely reduced poverty and inequality because the energy subsidies accrued disproportionately to the rich (the poorest decile received $1 for every $10 of the gasoline subsidy received by the rich) while the cash rebate of about $1.50 per person per day has helped many under the international $2 per day poverty line escape poverty.

Finally, there is no evidence that inflation affects the lower-income groups, which form the government’s power base, worse than any other. Not everyone can lose, since higher rents or produce prices must accrue to someone.

Details aside, the very fact the government would embark on such a risky program at the height of its standoff with the West suggests that it does not believe that it is staring into the economic or political abyss just yet.

The government faced its first palpable and serious economic crisis in December 2011 when, after several years of stability, Iran’s rial collapsed, losing about 80% of its value in one week. The devaluation was clearly triggered by the tightening of the financial sanctions against Iran, passed by the US Congress earlier that month, but it was overdue by several years.

Inflation had put Iranian producers at a huge disadvantage in the face of competition from Chinese imports. Since 2005, Iranian-produced goods had become on average 50% more expensive relative to foreign goods, causing waves of bankruptcies and massive layoffs. While sections of the Iranian society that had enjoyed cheap foreign currency were hurt, others who would soon find jobs in industries revived by devaluation stood to benefit.

Apart from the fact that sanctions have disrupted Iran’s foreign trade, the foreign-exchange situation of Iran is the envy of the developing world, with virtually no foreign debt and substantial reserves of various currencies and gold.

Iran’s economic conditions may not be dire, but they present its leadership with numerous challenges. The sanctions are yet to take their full effect, and the West can bet that when they do in the coming months, they will severely limit Iran’s ability to export its oil, to spend its proceeds on critical imports or to arrange for barter with a few key countries, such as China and India.

The time for Iranian leaders to turn this crisis into opportunity may have passed — they still disagree on whether sanctions have hurt at all — and the national unity needed to achieve it may no longer exist. But they have reason to be confident that with some policy corrections to improve the domestic climate for business, Iran can weather this storm and the economy can coast for quite a while so that the leadership does not have to give in to what it considers unreasonable Western demands — especially with no prospect of a serious rollback in sanctions.

What would the West do if, for the sake of the argument, it were to abandon its belief in a crippled Iranian economy? Would a compromise at Moscow or later in the year be more likely?

The answer depends on how realistic the war option is for the West. If bombing Iran’s nuclear facilities is a feasible option, the West may not care much about whether Iran’s economy is collapsing. It is like a poker player with a gun who plays carelessly because he knows he can clean up anyway. If, on the other hand, the war option is very costly, having a more realistic picture of the Iranian economy would help the West play its cards more wisely.