Ahmadinejad's Swan Song: 'Wherever I Am, Politics Will Follow Me'

Al-Monitor's Barbara Slavin has these questions for the Iranian president, whose term ends next year: Were Iranians better off now than when he took office? And what had he learned in his nearly eight years as president, what were his achievements and what would he do differently? 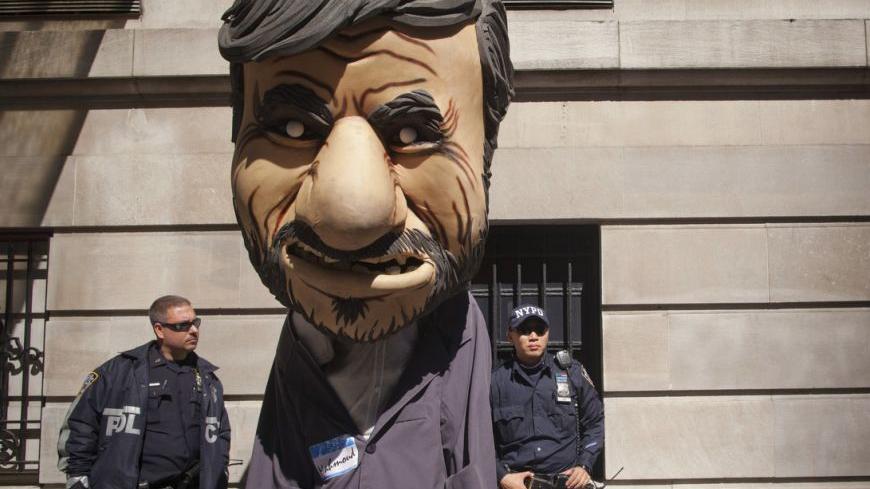 New York policemen look at a man dressed as Iranian President Mahmoud Ahmadinejad during a protest against Ahmadinejad outside the Warwick Hotel in New York Sept. 25, 2012. Ahmadinejad is staying at the hotel during his visit to New York for the UN General Assembly. - REUTERS/Andrew Kelly

In New York for what is likely his final appearance before the UN General Assembly as Iran’s president, Ahmadinejad has shown characteristic obliviousness to the impact of his words and an iron constitution in facing down journalists, think tankers, peace activists and myriad others invited to hear his musings.

On Tuesday, it was the turn of a small group of Americans who have written books about Iran. Having been the first US newspaper reporter to interview Ahmadinejad after his 2005 election, I asked him an American-type political question: Were Iranians better off now than when he took office? And what had he learned in his nearly eight years as president, what were his achievements and what would he do differently?
“Certainly, people’s conditions are better,” he asserted with apparent sincerity, despite the punishing impact of sanctions imposed on Iran because of its nuclear program. “The medium average income has increased by almost $4,000,” the Iranian president said, contradicting what Al-Monitor heard during a recent visit to Iran.
Divisions among social classes have “decreased drastically” and Iran has made important scientific and technological advances, he said, including putting two satellites in orbit. Iran now manufactures “more than 96%” of needed medicines and “non-petroleum exports have increased seven-fold.”
When Al-Monitor interrupted to note that inflation and unemployment have risen, that oil exports have plunged to less than 1 million barrels a day and the Iranian currency is worth less than half what it was when he took over, Ahmadinejad responded as he always does by noting that other countries are also experiencing difficulties. Unemployment per capita in the United States is higher, he asserted, and conditions are “worse in Europe.”
And how had he changed in seven years? “I have gotten older,” he said. Also, people have not always reacted as he anticipated to his world view and what he described as a sincere outreach to two US presidents.
“The obstacles are numerous and much bigger than I anticipated,” he said, but that has only made him “more resolute and determined” to advance his concept of “justice and fairness.”
Later during the session, which lasted nearly two hours, Ahmadinejad showed a few glimmers of humility. “I do accept that some things may not have been said in their best forms,” he allowed when pressed on his controversial comments about Israel and the Holocaust.
Regarding Iran’s internal situation, “I am not saying I totally succeeded but we have tried quite hard” to improve conditions and the model created was “not bad,” he said.
He also noted with evident pride that at the annual UN conclave, two speeches for the past seven years have attracted the most attention — that of the US president and his own. He did not seem to realize that the main reason his speeches garner so much media notice is because of Iran’s nuclear program and his own controversial rhetoric.
His main theme, as in the past, was that the world is changing in ways that are not to the advantage of the United States and that American leaders better realize this before it is too late. This time, Ahmadinejad had stronger evidence than he has before – the upheavals that have brought to power new governments in Arab countries that are more attuned to popular sentiment and thus less enamored of US policies.
He referred to the recent violence over a trailer for a blasphemous movie. “I do not believe that the US government was behind this ugly and insulting deed,” he said. However, the violent reaction in many Muslim countries — although, interestingly not in Iran — reflected opposition to US policies of “hegemony and occupation,” he said.
As he has during other appearances this week, Ahmadinejad denied that Iran seeks nuclear weapons and promised "to do my utmost ... to avoid any conflict." Such weapons “are no longer usable” and Iranians are “wise enough not to throw away investment in a field that is burned down and ravaged,” he said.
The issue can be resolved, he insisted, without explaining how.
Ahmadinejad said there are far bigger dangers in the world than nuclear weapons. He said the president of Pakistan, Asif Ali Zardari, had told him recently that there are “42,000 trained suicide bombers” in Pakistan and “more than this in Afghanistan.” Such people, he suggested, were responsible for the recent murder of the US ambassador and three other Americans in Libya. “They are everywhere and extremely dangerous,” Ahmadinejad said.
Asked whether Islamic groups in the Arab world were seeking to emulate Iran’s 1979 revolution, Ahmadinejad said each country was different and “we have no expectations that they will use our same mold.”
However, “there is an international spring, a world spring coming and certainly global relations and equations will change,” he said. A decade from now, he predicted, the US will have withdrawn its forces from the Middle East and nuclear weapons will have gone into “storage.” There will be “a vast wave … and the UN will truly become a United Nations,” Ahmadinejad said.
Asked if he would try to retain a political role after his presidency ends next year, the Iranian leader said he would because others would demand it.
“Of course, I cannot be away from a political atmosphere,” he said. “Wherever I am, politics will follow me.”
Barbara Slavin is Washington correspondent for Al-Monitor, a senior fellow at the Atlantic Council and the author of a 2007 book, Bitter Friends, Bosom Enemies: Iran, the US and the Twisted Path to Confrontation.